I'm glad you enjoyed it! Or apologize if you didn't

Thanks for playing! I'm for sure going to make the order times more lenient, as well as introduce some in-game difficulty sliders so the player can choose how frantic they want their kitchen to be.

One of the next features will be a menu builder, so you can decide what dishes you wish to serve (and thus only worry about those ingredients). On top of that ingredient/storage management is definitely something that will happen soon thereafter, with there being a "back room" for your general storage and limited space in the kitchen for ingredients you actually wish to use.

Thanks for the pointers and suggestions! Your feedback helps the game grow and be better :)

Thanks for giving it a go! I'll definitely add more time to the orders, plus there will be some more in-game difficulty sliders available soon. You can't separate food once they've been in the same dish, that's a health and safety precaution. I thought I had added pausing the game when the cookbook was open but I guess not, that should also be in soon.

Was ready for a comfy game, but the .rar is empty D:

Thanks for playing and for all the good feedback! A lot of your points are definitely being fixed or looked at for next demo day. I'm still working on making the mechanics "flow" better so there's definitely room for improvement, in particular letting players put any food into any dish that could (logically) hold it. I also need to communicate certain things to the player better which means the tutorial I slapped together needs work. Cooks timings will be tuned, as well as the bugs you mentioned fixed.

Aren't we going to drain the pasta?

That's something I hadn't thought of and no one else has brought up. Perhaps? I'd have to think of a non-intrusive way of implementing that, but overall I'm trying to remove any inconsequential annoyances (like having egg shells after cracking open the eggs, or dirty workstations have cutting noodles or smashing tomatoes).

Two-step cooking could be nice; have dishes requiring ingredients to be added halfway, so instead of having one cooking bar, you have two.

That's also something I hadn't considered (yet). It'd be relatively simple to implement with how I set up the recipe/cooking system.

That's so that the player can't place an object where they were, exit build mode, and be stuck in or on top of furniture ;)

Thanks for giving it a go. The tutorial will definitely get a face-lift, I just needed to get something out in time. Right now ingredients are only allowed to go into dishes that will produce a secondary food, so eggs can go into bowls because that makes "mixed eggs" but eggs don't have any valid recipes involving a plate so that's not allowed. But I'm heavily considering changing it to be less hand-holdy and more realistic, where any ingredient can go in any dish so long as it makes sense (so eggs could go onto plates, but milk can't).

Thanks for playing, glad you had fun. You really went above and beyond by making a video, I'll definitely be picking that apart to look for things I can improve and build upon.

Thanks for taking a chance and giving it a go! I definitely still need to adjust the timings on things

Thanks for playing! Adding somewhat intelligible food models (and other bits of polish) are the next step, now that I think the concept is pretty solid.

Whenever anything cooks I check if there's a valid recipe for the current ingredients (cooking water doesn't turn into anything rn, so there's not), and water isn't a "finished food" so it doesn't burn, so that's why it becomes dubious food. Obviously an oversight, I can give it an exception. In fact I may add a mechanic where recipes requiring water in pots cook faster if you first pre-boiled the water.

Were the omelet and bread on the same plate? I think that might cause the bug. Again that's something I didn't really think of before and can fix.

Thanks again for playing! And hopefully, if this project gets far enough along, you'll be able to design your own player character which means cute anime girls among other things.

Had a tough time getting use to controls, idk they just didn't "click" with me. I like the style of game you're going however for and visually the game works.

Lots of juice and charm! Dialogue needs to be a bit more obvious as it can be lost in the midst of battle.

Simple to understand, requires a big brain to master. You could also introduce more mechanics such a mirroring/shifting instead of just rotating to give the game more length, but it all worked as it is

Fun and polished. In my humble opinion I think movement and combat are too fast, and the rooms a little big, but that's just my personal preference. I liked the ran-gen characters and really felt myself get into the flow after a while.

Fun gaem. Personally I think the falling pieces have too many walls, and I ran out of energy too fast (plus I wasn't sure how to get more energy), but besides that I had fun with this genre mash up!

Wall jump felt a little off, but besides that I can see where you're going with this. Keep at it!

Had quick, fun jaunt. I think controls should be available in-game and there needs to be some enemy balancing but besides that it was fun to run around and kill robits.

Fun and charming game! I enjoyed playing through it and the different abilities felt good. I would spend a little time populating the environments to make them more interesting as well as better explaining the 123 abilities, but besides that I had a enjoyed my time.

Solid prototype, my only criticism is that combat seemed slow at the start and I got bored of it by the 3rd enemy, but idk how to "fix" that if you're trying to stay true to King's Field so ignore me.

Good groundwork for a fun game, it needs some more elements to make it more interesting as waves go on however.

Good proof of concept, I was able to get to the victory void early by letting go of the controls while upside down. Can't wait for combat

Enemies need to be easier to see and hit, movement (and death) was way to fast to be able to hit stuff except by cheesing them from long range or around corners. I like the style though

Atmosphere is good and the controls felt solid. I think the damage from swinging the sword comes a little early, animation wise, but besides that I liked combat. Though I never did find a use for using particular swings on enemies, besides stabbing at floor-guys. I wish there were some sort of map, whether it's a diablo-style one or a tradition physical map, that way I knew where I had been and what was left to explore as I feel like I missed a lot. I look forward to more!

Music and visuals were great! Melee seemed to be not worth trying, I have no idea what the shift-dash did except make pretty visuals, and I wish I could zoom out the camera more (or at least have some indicator to where the boss is when they're off screen, even if it's not perfect information) but I had fun :)

Sorry if I didn't explain clearly, the font loaded and stayed fine, I would suggest you look for a new font that's less blocky as it's hard to read. I understand it's part of the style but there are plenty of 16bit fonts out there that I think would keep the same style while being easier on the eyes, but that is my own personal preference so take it with a grain of salt.

Cute platforming with good style. I think the controls could use some tuning, especially the wall jumps (don't immediately cling to the wall if I jump from the ground by a wall) and the "dash" symbols (maybe don't require me to press space to get into them, only activate/shoot away). The end lag for landing and attacks was also a bit much but that's just my preference. I want to see more!

I didn't understand what was going on, all I knew was I had to jump on peoples' heads and follow my heart. I liked the visual style and the menus are very memorable, I'd turn down the juice just a little though.

Fun game once I realized what I needed to do. AI could be a bit harder, they don't seem to know how to approach the player if they're a certain distance away which let me take leading-shots on them while staying safe, and they also don't seem to change course to avoid missiles. I would love if there we key bindings for move/fire, and the different missile types. But I can see where you're going with it and look forward to more!

I liked the movement a lot and can definitely see my coming back to play more as you add on to what's already there. Visuals and enemy design were good. I kept trying to chain attacks or shuriken throws to the end of slides, I think it would fit very well in this kind of game. Keep at it!

Very aesthetically pleasing and the movement was super fluid. I especially loved yeeting a spear and then teleporting to it, while preserving momentum. I would tone down the spear FX and ribbon flapping while you're holding the spear as it's a little distracting. I died before completing the demo so something like this may already be in the game, but I could see a skill-based deflect working very well with the existing mechanics and enemies.

A well done wave shooter that was fun to play and felt slick.

Scroll wheel should go through my weapons. The player's movement should be clamped to the ramp when going down them (instead of the player floating off, mostly into the acid).

The artwork is great and I can definitely see this becoming a good NSFW game. I got this weird visual bug (windows) whenever she was sitting upright that would cut off her hair weirdly. I would also spring for a different font, it was hard to easily read and that's kind of important for a visual novel. 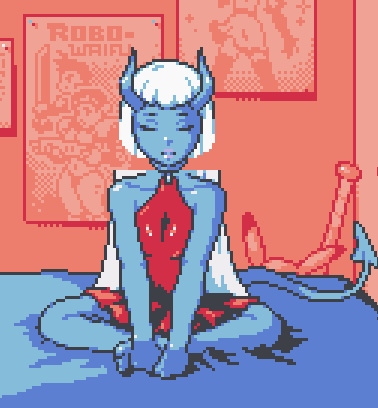 This month's update: save/load system for y'all. Bug fixes.

Updates since last demo day: Naming your shop + shop reputation mechanic. The town got a new feature: a notice board. The Forest level is back and better than ever. New highlight system to better see interactable objects. New grass. Redid the interact system. Saving and loading are in. Misc bug fixes and changes.

if you downloaded one of the newer versions (.31 or later) then yes. You first have to talk to the smith to learn how though.

Thanks for the email! Could you send me the file(s) located at "C:/Users/YOURUSER/AppData/Local/Temp/Comfy Fox, LLC/YOURcursedSHOP/Crashes"? Seems like Unity split up the crash report.

I also uploaded an experimental build for Windows 7 that may fix the crash issue, if you wouldn't mind giving that a try I'd be super appreciative.

Could you email me your Play logs (on windows it's in Users\YourUserName\AppData\LocalLow\Comfy Fox, LLC\YOURcursedSHOP\) to richard@comfyfox.com please, that'll help me diagnose the crash

Could you email me your Player logs (on windows it's in Users\YourUserName\AppData\LocalLow\Comfy Fox, LLC\YOURcursedSHOP\) to richard@comfyfox.com please, that'll help me diagnose the crash