Manage your shop, befriend your new neighbors, and adventure throughout the countryside!
Submitted by comfyfox (@comfy_fox) — 1 day, 11 hours before the deadline
Add to collection 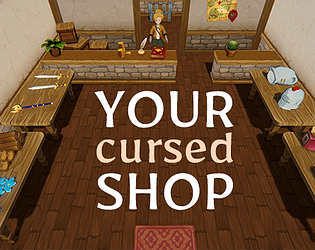 Cant seem to smelt iron ore, is that implemented yet?

if you downloaded one of the newer versions (.31 or later) then yes. You first have to talk to the smith to learn how though.

wow! blown away at how this looks and the insane level of polish it has! the intro really sets the tone and mood!! same with the comfy icon!

What OS are you on?

Could you email me your Play logs (on windows it's in Users\YourUserName\AppData\LocalLow\Comfy Fox, LLC\YOURcursedSHOP\) to richard@comfyfox.com please, that'll help me diagnose the crash

Sure, I just sent it

Thanks for the email! Could you send me the file(s) located at "C:/Users/YOURUSER/AppData/Local/Temp/Comfy Fox, LLC/YOURcursedSHOP/Crashes"? Seems like Unity split up the crash report.

I also uploaded an experimental build for Windows 7 that may fix the crash issue, if you wouldn't mind giving that a try I'd be super appreciative.

Could you email me your Player logs (on windows it's in Users\YourUserName\AppData\LocalLow\Comfy Fox, LLC\YOURcursedSHOP\) to richard@comfyfox.com please, that'll help me diagnose the crash

Tried and the same thing happens. Sent you the logs

Very strong intro cutscene, the rhyming was a great touch for the comf. I also liked the characters in this game, Shawn and Eloise have very good chemistry.

Like chaikadev said, it's incredibly polished. My favorite little effect was the houses flattening down to show what's behind them. I never really thought of that, but that's really a lot more satisfying to look at than just making them transparent. Lots of character in that.

It's a fun game with lots of potential. Aside from the occasional bug, I had a great time. I haven't played Recettear, so I can't tell how close the gameplay loop is, but the selling stuff mechanic felt pretty neat. (I guess the closest thing I played to this would be Animal Crossing, and this game loop is way more interesting I think).  Shame I got stuck in the time loop, I would've liked to see if I could also restore the inn in the demo. I think adding outside "quests" which are more than just "upgrade your shop" work wonders for getting players invested (worked for me at least, love that kinda stuff).

Submitted
What if?
LikeReply
comfyfoxDeveloper2 years ago(+1)

Thanks for playing, and for such a detailed bug report! If it's not too much, could you email your Player.log (on windows it's in Users\YourUserName\AppData\LocalLow\Comfy Fox, LLC\YOURcursedSHOP\) to richard@comfyfox.com. The 2nd half of bugs seems like 1 thing went wrong which cascaded downwards and ruined a bunch of other scripts and I'd love to be able to replicate (and fix!) it. Either way I'll look into them today and tomorrow and hopefully have a fix soon.

Quests, such as to unlock more crafting, buildings, and other things are definitely some of the things I'm working on next. I'm glad that even with the hiccups you experienced you still had fun!

I'm sorry to say this because your game seems fun but it crashes upon starting up. I see the comfy fox logo, a window with a loading bar pops up for a fraction of a second then it crashes. I'm playing on the windows version.

Edit: I got the game working on another computer. Here's what I noticed while playing:

I stopped playing there because the game ran pretty badly on my laptop but it seemed very well done. How many people are working on it? The production value and attention to detail stand out compared to most hobby projects.

The game looked very similar to Recettear. What are you going to change to make it different?

I would have liked to be able to get to the core gameplay faster. However, I was more impatient than usual because the game didn't run too well on my computer.

Thanks for playing! My best guess as to why it didn't run on your laptop is the game utilizes DirectX12 for grass for Windows and Windows 7 doesn't support it iirc. I'm currently scouting for some new grass anyways and one of my requirements is that it's OpenGL compatible so hopefully it won't be a problem sometime in the future.

I'll go ahead and push up the "hold Esc to skip intro" task priority, I can see how it's a hindrance. Do you remember if you were in the middle of an action or menu while alt-tabbed that caused your mouse to drag up? Or was just during the game while walking around?  And if you wouldn't mind me asking, what CPU and GPU does your laptop have? I'd love to be able to better support lower end PCs.

Currently the project is mostly done by me. A lot of models and animations were bought on the asset store, some were made by Square in agdg,  Bah who also hangs around agdg made the character portraits, and another friend made some of the UI backgrounds and layouts. It means a lot that you think it's so polished and well made, I'm hoping to get a following or a publishing deal to be able to continue working on the project as my full time job instead of only working on it when I don't have another side gig going (I'm a contract programmer by trade).

Recettear is definitely one of the main inspirations. While how it hands the shop side of things is good, I hope to improve upon it by how you interact with the town and the townspeople, to hopefully make it feel a little more like animal crossing instead of just a series of menus. Mix in some top-down zelda style exploring and maybe combat and I feel like the game will really shine.

Thanks again for playing and for the thoughtful writeup, it means a lot!

>Do you remember if you were in the middle of an action or menu while alt-tabbed that caused your mouse to drag up?

I've restarted the game to test that out. It seems to happen during the VN-like portion of the game between the two cutscenes.

>And if you wouldn't mind me asking, what CPU and GPU does your laptop have? I'd love to be able to better support lower end PCs.

Here's the specs of my laptop.  It's using the nvidia GPU when running your game, not the intel one. 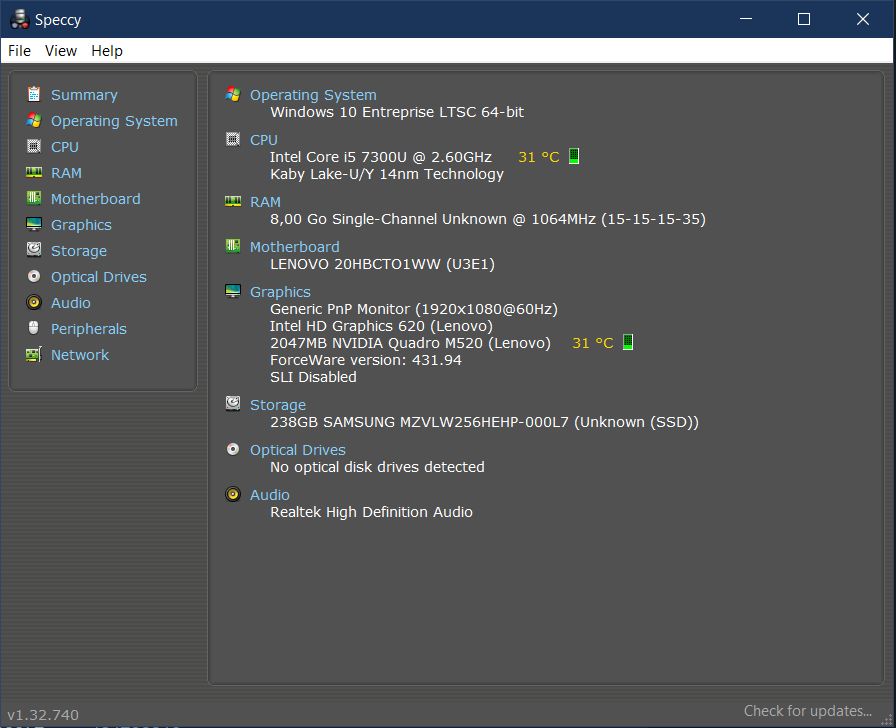 Thanks for the follow up. One last question, for the Windows 7 machine (where it kept crashing), do you know if it's 32 bit or 64 bit?

It crashes too after the logo.