This thread is now dedicated for ingame typos.

Ah! Well, those aren't really typos or anything, but nonetheless grammatical in nature... mostly. Since i don't know if this has been already mentioned elsewhere, lemme just put the ones i distinctly remember here (and for our convenience, i looked them up in the questtext.gd)

in "MainQuestFrostfordMainOrder" there is the one i noticed the most. The Order mage says "Oh right,you is the one we want to deal with that one issue..." Which stems from the use of $he, which gets turned into 'you' instead of 'he' because it runs through globals.player.dictionaryplayer(). Maybe another variable is needed, like $3he for third-person-mentioning of the player? i'm sure i noticed it somewhere else in the quests, too. and even though i can't remember where, i guess it CaliGoodEnd, because in there is "Mom, Dad, this is $name. $He’s been letting me stay at $his mansion and $he helped me find my way back." And the same, i guess, in CaliGoodEndKeep, too, even though it doesn't show, because " And, well, I guess I do owe $him for all this." just sounds like she suddenly addresses the player again. This may be somewhere else too, but i don't remember it. :)

then in "MapleFlirt": "... gives you no choice but to stay standing leaning up against the wall, but it seems ..." sounds weird, but not being a native speaker, that might just be me. or maybe its missing a comma? o.0

then in "MainQuestFinaleGorn", there is a 'a' missing. "...despite the absence of their leader, considerable number of Kel'tor's clan went into hiding..."

and i was shocked, when in "MainQuestFinaleGoodChoiceLeaveGarthor" you toss the poor bastard to his death o.0 "You strip Garthor and his orcs of their equipment and toss them over a cliff before continuing on your way." This should really be a "it" instead of a "them" ;)

i hoped that helped, further good luck with that, i highly enjoyed playing it (even though i used a walkthrough in order to not miss out on special characters :) )

anyway, i just noticed that in the small logs on the side, when someones stress-level changes, it should be "has become mildly stressed" (same with considerably stressed, of course) instead of "has became" :)

Fear "Invokes subconcious feel of terror onto the targer. Can be effective punishment." .....mispelled target

this one is just awkward to read. i want to think your companion is suppose to be doing things... but its having the main character do things. which is causing word and grammar conflicts.

##switch to companion instead of main character (i.e as pictured Moro is my main), and modify the wording.

"As you consult with your leading companion --

COMPANIONNAME mentions that (he/she) saw some poisonous berries nearby and offers to try to poison the bandit's mead barrel."

##correct the rest to follow along for proper wording.

"You accept and warn (him/her) to be careful. COMPANIONNAME stealthily moves off into the woods. A few minutes later, the bandits that are drinking are distracted by a sound and start poking around the brush.  You see COMPANIONNAME quickly sneak up to where the bandits left their mugs, adding something to each. As (he/she) disappears back into the forest you admire her skilled woodcraft, startled when (he/she) pops up behind you. As you watch the bandits resume their drinking, it does not take long before they start acting oddly. One lies down and apparently goes to sleep, while the other starts throwing up into the bushes before collapsing."

##after pressing continue (this one is pretty good really... just to to remove "be")

"As you carefully scout out the situation you realize that there's probably more here than you can easily hand at once. Two bandits are in the center of the camp arguing over who gets to rape the terrified girl tied up near them. Two bandits are lying in a drunken stupor near the mead cask and one more is making a slow circuit of the camp, keep a close eye on the surrounding woods.

here is 3 of the texts. all text is missing descriptions at the end for both the Main and the Slave.

In globals.gd: $name $surname is no longer in your posession

the pleasure shivering through your body despite your desire.             not despite, because of.  or maybe despite the situation instead.

also on my previous post you missed  disgust and overwhelmed, I forgot to put // to indicate 2 changes :

watches your actions with digust,        overwhelemed by the situation

Dunno if a bug or a typo: the brothel owner expressly asks for an elf girl, but a male elf is fine too.

This one always annoys me because of how often I see it.

(Same thing for large militia group and for other towns)

So in 19c, sexing your sister starting slave gives some typos.

Should be, 'You and your sister <do sex thing>'.

This has already been fixed in 19d

At the Master info window it states "Personal Achievments" should be achievements.

P.S. It would be nice if the helper would tell the game version you are playing when asking about bug reporting.

$name seems to be in a melancholical mood

In jobs&specs.gd, the bonus of the Nympho spec is described as follows: Sex actions take only half energy, + 2 mana from sex actions, + 25% to fucktoy, no penalties from any sex activities.
A slave working as fucktoy in Umbra, gets no bonus though. Nymphos get a nice +25% if they work as exotic whores in Winborn.

In tutorial.gd:
- at line 49: if you're servants -> if your servants
- line 164 is not true anymore: The last opponent standing in combat will always stand their ground and do not need a servant to pursue them. [...] 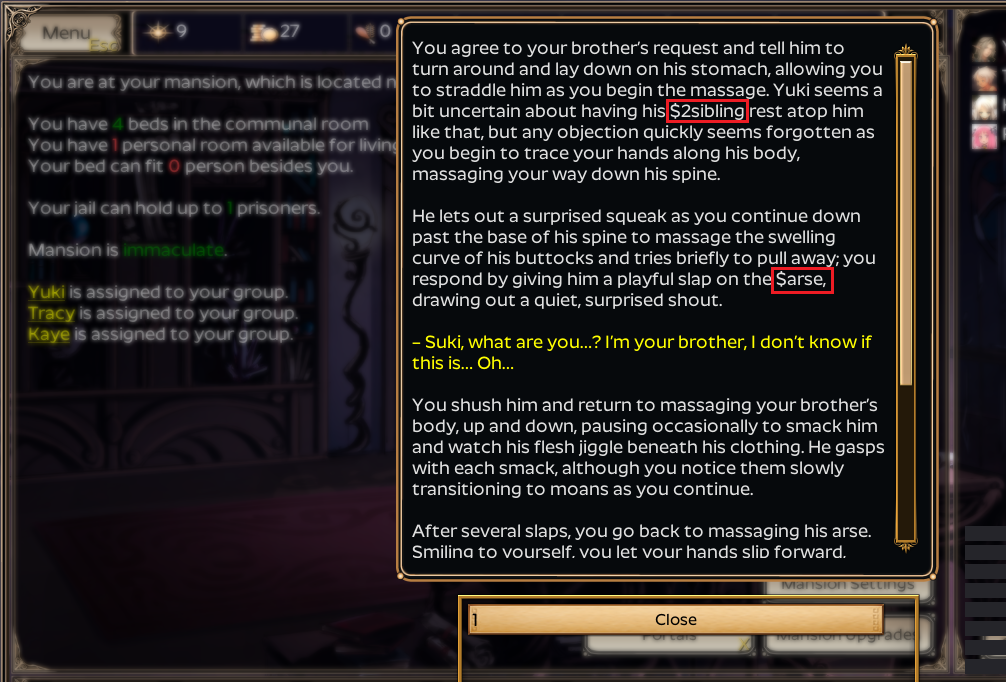 The reference to cattle on the main mansion screen should say "livestock" instead, on account of the hens.

One more:   "Easterm" sword, should be Eastern.