Definitely the most thought-provoking of the bunch!

Having dealt with creating graphics with a limited palette, I’m really impressed with how the sprites turned out in this! They do NOT look like 16-color sprites.

With a few more tweaks to make it clearer why things are happening I think this could be really solid!

Thanks! I realized about 2 hours before the end of the jam that endless mode ramped up difficulty way too hard so I eased off on it but I think I went too far. Difficulty ramps up based on log(time) so it does increase but much too slowly. At least it should be appropriate for people who haven’t played Puyo Puyo before, haha.

There’s only 4 missions so I think you should be able to get back to where you were pretty quickly after losing but yeah, starting the level back over would have been better.

I think the main problem is it’s really difficult to actually find the source for what you did for the jam since there is so much code in the tarball and most of it was pre-existing. The jam page mentions you should make an effort to show what you worked on for the jam; maybe in the readme you could point to the main.fnl file and explain where the rest of the code came from?

If you’re using Fennel and Love2d for the jam and this isn’t your first game, please consider making your game using version 1.0.0-dev of Fennel so we can put the latest version thru the paces and see if it’s ready for a final release. But if it’s your first jam don’t sweat it and just stick with the stable version.

I’ve got a branch you can use here: https://gitlab.com/technomancy/min-love2d-fennel/-/tree/1.0.0-dev

We had an entry last time using a custom lisp stack which targeted the Apple ][gs so I mean, seems right up the same alley: https://spindleyq.itch.io/8-bitsy

FWIW I’ve never had trouble running your games on Debian. All it takes is sudo apt install racket and then it runs fine.

Oh dang; I didn’t realize you had updated this to include publishing to the browser! That’s great to hear. I was going to do another TIC game but I might go back to love2d if the browser publishing is working.

Hello! I’m the lead developer of the Fennel programming language. Fennel is one of the languages included in TIC-80, and making TIC games is one of the more common things that Fennel is used for.

We are running a survey to help us understand how to improve Fennel. If you’ve tried it, even just a bit, please check out https://fennel-lang.org/survey and let us know your thoughts.

I found a still-maintained fork called gbajs2 and asked about this there. They gave a good answer; looks pretty easy! https://github.com/andychase/gbajs2/issues/24

Thanks; that looks great! It plays my rom nicely.

Unfortunately it doesn’t seem to have any documentation; the readme refers to a wiki that no longer exists. I want to publish a version which includes my rom and doesn’t make people select it with a file upload dialog. Do you know if there are any examples of such a thing published elsewhere that I could follow? I don’t know any Javascript but if I saw another game do this I bet I could figure it out.

Edit: oops; posted before I saw that you gave a second suggestion. gbaninja looks like it has better docs but it crashes loading my game while gbajs plays it flawlessly.

I know there are some GBA emulators that run in the browser. Does anyone have recommendations/tips for how to get a cart embedded in such a way that you can play it straight out of the itch page without downloading or installing anything?

Thanks; I got a decent answer on their issue tracker, though their docs could certainly be improved.

A simple example for anyone who’s curious: https://git.sr.ht/~technomancy/liquid-runner-3/tree/master/item/Makefile#L51

Importing a sprite sheet from TIC-80 turned out to be pretty easy using gbagfx. 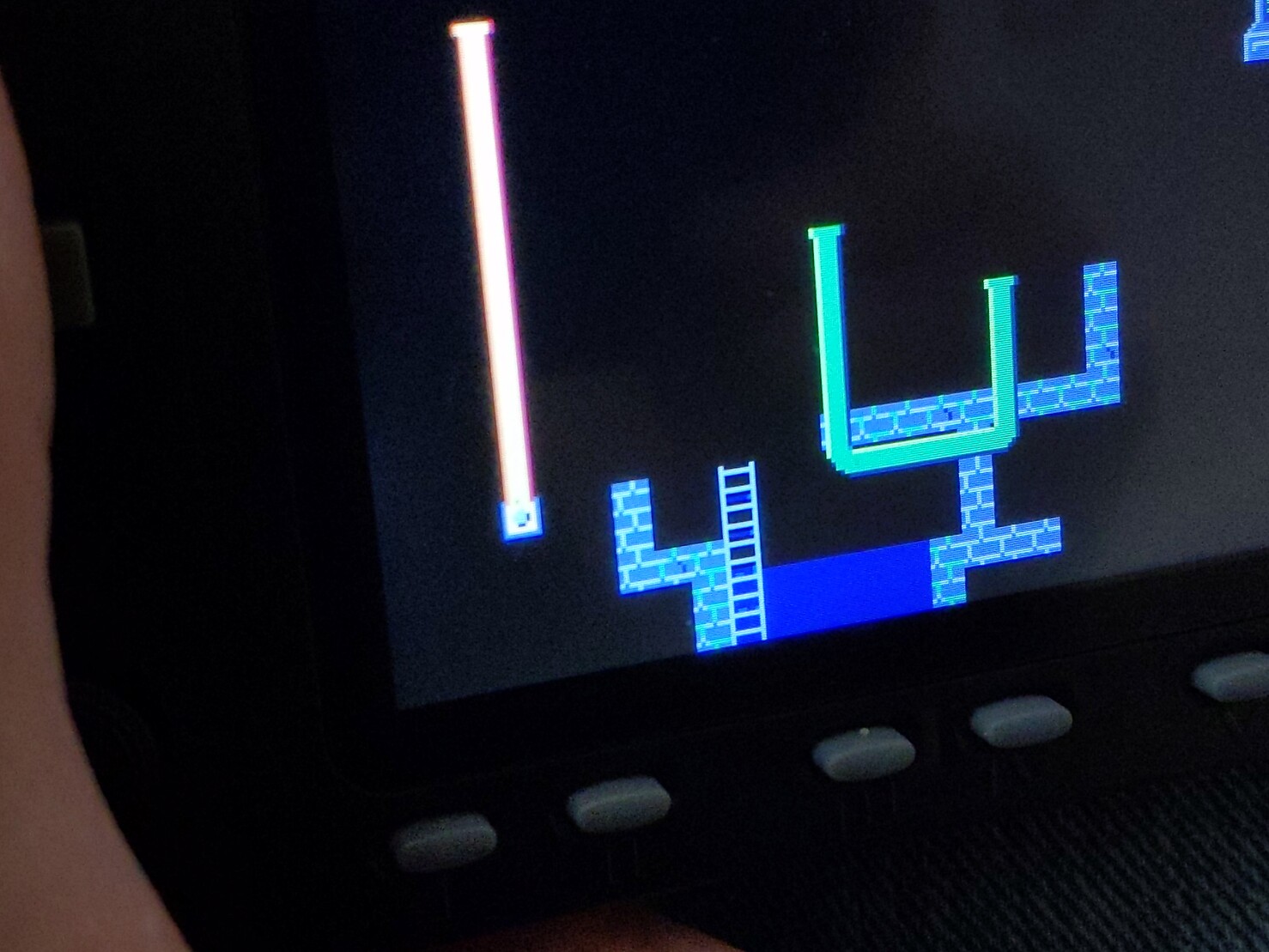 I’m looking at tilemap studio and it looks promising; however there aren’t any examples in the docs about how to incorporate it into a GBA game. Does anyone have an example of using a map created in this program and incorporating it into a GBA build?

Thanks but I just noticed the other thread which says there’s no way to run it on glibcs older than 2.29; I have 2.28.

Is there a way to run this on a system that has libffi6 instead of 7?

I love how you can be playing thru and then all of the sudden be like “where did THAT come from?” Very peaceful and soothing to play.

It broke my brain around the 3rd Y combinator puzzle, but this was really inventive. At first I was like “wait how is there all this lisp code with no quoting” and then I was like “ohhhhh that’s basically the whole game”. Love the idea. Also this reminded me a lot of the structural editor I was working on a few months ago; same key bindings used to traverse the code trees.

robotfindskitten is exactly what I thought of too–the randomness of the conversations would make it feel like that even if it didn’t involve … finding a kitten.

Thanks! Most of the puzzles were made by my 10-year-old son who has a couple of his own games on his own itch page: https://zachhagelb.itch.io/

I should have made that the reward for getting all 10,000 points!

It’s a lot harder than it looks! I like how you mix multiple rulesets into the same grid to spice things up. Fun times!

The music really makes this work! Short but sweet.

I couldn’t get this running on the latest Debian or on Fedora 31; I get “./zonqueror: /lib64/libc.so.6: version GLIBC_2.33 not found (required by ./zonqueror)” followed by the same message again but with GLIBC_2.32.

I’ll be curious to see if anyone gets a 100% score on this as it’s even more challenging; if you do, post a screenshot here!

I’d love to see some shots of this running on real hardware!

Another TIC-80 entry for me. It’s an homage to Lode Runner, and like the original Lode Runner, my kids are helping out with the level design.

I’m glad you like the game! The last beta release was in 2017, so it’s really not under active development any more. I would like to pick it up again some day, but it might be a year or two before that happens. If it does, it’s quite likely that the API would change significantly. I have a branch where all the default in-game code is ported to Fennel instead of being written in Lua, though Lua is still available. We’ll see!

I just posted a writeup of a simplified raycasting engine using the Fennel language. It is based on my recent jam entry Spilljackers but radically simplified down to 43 lines. I tried to show how simple the raycasting algorithm is by stepping thru the functions needed to trace the path of each ray. One fun technique that worked really well is encoding color and height of map tiles in the sprite sheet based on the row and column of the tile in question.

(I love how TIC-80 lets me embed the actual game demo right in the middle of the blog post.)

I hope you can make some progress and finish it after the jam!

Seems to have some commonalities with Go; that’s fun.

Yep, wanted to give it another shot after we had so much fun using TIC for This is my Mech last year. The built-in map editor has been really handy for designing levels.

Looking good! Here’s a recent shot of ours:

I just published a 14-minute introductory tutorial video for anyone who wants to see what it’s like to code pong in Fennel on TIC-80:

It’s pretty rough since I don’t have a lot of experience doing video, but maybe some folks will find it interesting!

Great job for a first jam! Had a really ominous feeling to it; the howling wind was a nice touch.

Jek is usually in the forest. If you hit tab, you can see all the names sorted by Y value so if he’s above your name in the list, search up, otherwise search downwards.

Thanks. I tried the updated version and it works better but still has some problems. When I downloaded it, it complained that it was missing the .pck file. Because I had downloaded the windows version previously, I knew that the .pck file was found there, so I extracted that into the same directory. Then when I ran it, it said that the .pck file had to have the same name as the executable (without the extension) so I renamed it to match. Then it was able to launch, but it crashed because it required a newer OpenGL version than I had on my machine.

So anyway, if you fix it so that the Linux version is a tarball or zip that contains the correctly-named appimage along with the .pck file, then it will probably work on other peoples’ machines if they have a newer graphics card than I do.

Thanks but it looks like the zip file still just contains an .exe and a .pck data file, so it will only work on Windows. edit: you should probably remove the marker indicating that it’s compatible with Mac and Linux on the .exe download.