I guess the "impact" of having very few ratings should indeed be stronger. There are games in the top 100 that have only 8 or 9 ratings (all done by a bunch of friends, as comments are not written in english)

If the best stategy to be on top of the list is to show the game only to a few people (to ensure 5 stars), that goes against the idea of a game jam to me.

Great game! I like how you can handle levels depending on your previous choices.

It should have been a nightmare to balance everything. Good job!

Funny enough, we used the same idea in our game (one second to see the path), but with a rather different interpretation

Nice game! It looks very simple at first, but having to use only one rotation direction makes it totally different.

Nice little game! I played Slay the Spire a lot, so I already knew the mechanics.

It oculd be improved, of course, but that's already a good base. Good job!

Thanks for sharing your thoughts

That may be my opinion only, but what you described is precisely what we wanted to avoid: people (meaning everyone) will go to the submission list, sort it by "popular" (thinking that these games are probably the most enjoyable), and play/rate a certain amount of them (probably not 50). At least that's probably what I would do, from an outside point of view. So the "top" games will get even more visibility/ratings. To quote you: "if someone rates a popular game they enjoyed, they'll be will to go explore and rate other games". Except that the next game in line would be the second most popular.

The same use case with "random" order would at least be more fair to games that are not on the top 50 (even if that's not perfect, I agree)

I'm not saying that having these kind of sorting is bad, but I would have activate it only once the ratings are closed.

According to the comments, we did a hard game. It has been designed to be quite unforgiving (only one life), but still doable. And it seems that we achieved our goal here.

Later on, we added several difficulty levels. Instead of just altering some variables, we wanted to have a different experience for each difficulty level. That's why, on easy mode you have some additional visual elements which helps you to find your way out of the puzzle, whereas on hard and extreme mode, you get far more easily lost. I think that hard and extreme mode make you really feel what we wanted to share in this game.

Many thanks for the feedback! I too saw several other games with the same core concept, but totally different implementation as ours. That's what makes a game jam so interesting!

Indeed, procedural generation and/or a level editor would be a good step forward.

Nice game! Cool concept and neat realization. I was wondering it it would be the same thing all along, then things started to go faster... It feels like an horizontal tetris.

The fact that you did it only in one day, and alone is quite awesome. Good job!

Here is ours if you wish t have a look: https://weslito.itch.io/void

Cool game! Quite easy at the start, but it goes up quickly to something more interesting.

Controls are a little too rigid (using a combinaison or direction and action in one motion may have been simpler), but overall, good job!

Ps: The sound of the text in the intro is a little too loud...

I will check you game later with a friend (I guess it is better this way than playing solo). But as far as I can see, it looks really nice!

If you wish to have a look at the game we made, here it is: https://weslito.itch.io/void

Nice game! The large 3D world is nicely done! But maybe it would have been better to make it smaller and bring more life in it (it is quite empty currently).

Nice little game. It kinds of lack a purpose as the is no real goal in it, but it could be a base for something bigger. Good job

Cool game! I don't know if it is intentional, but the music and particle effects reminds me of Zelda Twilight Princess.

Also the deformation effect of the blocks is nicely done!

This game is good! Simple and effective.

The "tunnel" level with the slime is a little too precise, but overall that was fun. God job!

Reply
GMTK Game Jam 2019 community · Posted in HTML5 or macOS Games out there?
minimaul2 years ago

I tried and rated your game already, and found it very funny, good job!

We have a web version of our game too, even if the soundtrack is not working correctly on it: https://weslito.itch.io/void

Let me know what you think ;)

Nice game (every game with a dwarf is automatically nice :) ). I played and rated it yestarday already, good job!

We used pixel art in our game too, with some minimalist sprites (32x32): https://weslito.itch.io/void

Here is an example:

We made an horrific puzzle game based on light path, memory, darkness, ... The build is for Windows, but there is a web version (without soundtrack unfortunately..) 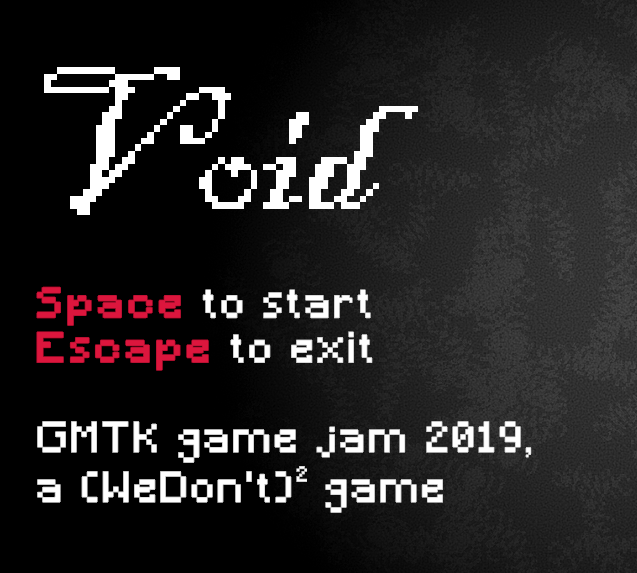 Funny game! Quite random sometimes concerning the position and the bonus (so if you are unlucky you have little chance), but after the second attempt I succedded.

I did not see upgrades for fire rate, it could have been a good idea.

Funny, with cool graphics. i like how it is possible to reach the goal by using two different traks.

It deserve some more ratings...

Totally agree too.. Isn't it possible to deactivate these filters?

Nice and funny game! Controls are neat, and everythings works fine. Like how you can cancel attacks by shooting at them.

I'll give a try to your game, looks promising!

The maze game is very complex to solve, some additional feedback may have helped

The jump game is more homogeneous. I didn't really get what the green keys are for, but I was able to finish it anyway.

Funny enough, we used the same kind of mechanics in our game (1 second of light to see the path)

Some indications on how to use the shirken may have helped (took me some time to figure out).

Our horrific puzzle game is also powered by Unity (2019.2 to be able to use 2D lights).

In our game, we wanted the player to feel lost and isolated (and also we had no musician...), so we didn't put real music on background. Instead of that we used an ingame noise generator to add some sound effects. As the players goes to higher levels, the pitch of the sounds goes up too, to amplify the feeling on unease

You can see the result here: https://weslito.itch.io/void (only in the downladable version)

I thought about procedural generation for the levels, but that was clearly out of the scope for the game jam. But maybe for the future...

Really cool game! Love the art and atmosphere of it.

I got stuck in the library, as other before me (a few hints may have been useful here), but all in one I had a great moment.

Not very easy to know what to do sometimes, but that's part of the game...

Thanks a lot! It is indeed unforgiving, as despair and darkness rarely forgive :)

Nice puzzle game! Difficulty goes up quickly as you have to manage several bots, but once you manage to find the solution that's quite rewarding.

Death is quite punishing indeed. But that's part of the idea. Once you fall into the void, there is no way out :)

Thanks a ton! Very glad you liked it!

With a sentence saying litteraly "click to take possession of a kid" I guess we are indeed in the spooky zone :)

Funny game! i experienced some issues with some characters being stuck sometimes, but with the reset button that wasn't really a trouble.