The Riddle Bros get the Phoenix Wright treatment you've always dreamt of!
Submitted by sevenish, ABMaca (@ABnormalMaca) — 6 hours, 20 minutes before the deadline
Add to collection 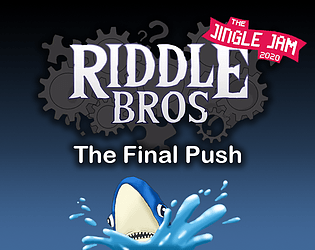 Thank you so much and so glad you enjoyed it! It was an exhausting 48 hours haha

Thanks so much for playing! So glad you enjoyed it as an Ace Attorney fan!

thanks for playing! I'm glad you liked it!

Really nice idea! Lot's of funny references. I think the backgrounds did not really match the art style though. Also I am not sure about the sound effects sometimes when people have a dialogue. Am I missing a reference here?

Thanks for playing! The sound effects with dialogue is more a nod to how phoenix wright does things. It showing if someone is yelling (which a certain detective with a 100% win rate does a lot.....) or to emphasis a point/show that you got a hint.

Loved how well you captured each of the Yogs personalities! It made me want a full length Riddle Bros game!

Thanks for playing! Glad you enjoyed yourself!

This was definitely a fun entry to play through, I'm a huge fan of Phoenix Wright and you did a great job capturing the gameplay style! I think the main issue for me was that the sort of slapping noise that plays every time you advance the text got annoying pretty quickly, so I did have to play with sound off for the most part. Also, while I know it's obvious to anyone who's played it, I feel it'd be important that you point out somewhere that the character artwork is traced over existing Phoenix Wright art, just to be safe! Aside from that it was a really well made game with great writing!

Thanks so much, glad you enjoyed it! So glad we managed to capture that Phoenix Wright style! And yes a lot of the character art is traced or based off of Phoenix Wright characters, or several of their body parts at least :). Sorry too about the slapping sound! It was supposed to be a bit annoying to emphasise that Zylus' character was annoying but we may have overdone it a bit!

Awesome game and so impressed you got it done in such a short time frame :)

Thanks for playing~! Glad you liked it!

Thank you~! Glad you liked it!

The game feels really nice, I found myself trying to understand what I missed for some time without pressing ALT F4, which is quite nice :)

Visually, the game is really pleasing, but the background of the first playable scene contains lots of elements, and it's pretty hard to find clues on this one.

The BGM and SFX are pretty cool, they give good insight about what's going on, but I found the inspector's talking sound pretty bothersome. I just wanted him to keep quiet at some point.

Even if the concept is pretty simple, I think a little tutorial to explain the different buttons and what you can achieve with them would be nice :)

The game was fun to play, even though sometimes you may get lost with all the clues you have and can use at the same time. The end is really interesting and gives an intense rush of satisfaction, I liked that part

I personally didn't encounter bugs, but could see on the description that there are some bugs you know of. Therefore, I didn't take it in account for the rating, because it is avoidable :)

I didn't really see the theme in the game? Or maybe did I miss something?

Oh no!
Zylus' clear bragging about his 100% win rate might have been too much.....
We just wanted everyone to know how great he was!
I mean is!
Clearly he's great!
I would never doubt that!

Sorry~! couldn't resist :P tutorial would have been great but we just didn't have the time. :(

And it sounds like none of our story twists surprised you, damn you're too good of a riddle bro for us to catch out~!

Thanks you so much for playing~! and for all your feedback! I'm glad you liked it!

And I understand for not having the time to create a tutorial, it's not a big issue for the rating I gave don't worry ;p (in fact given the rating I put in each category, this one has clearly no incidence on the result)

I'm the best riddle bro of all riddle bros' hehe! But I feel like it's even more rewarding than seeing a twist, you feel like you're too intelligent (oh wait I'm not :( anyway)

Well thanks for the laugh with your answer too! :)

hahaha glad I could sneak another laugh in~! Thanks again for playing~!

ooooooh there's some pretty damning evidence back at Yogtowers after [SPOILER] gets arrested that you need! But you might need to talk to the person who got arrested to find out what exactly that means! You're going after the Bristol Pusher after all! You need to make sure you have all the evidence before confronting them!

If you scroll down on the game page there is as (as spoiler free as we could make it) walkthrough available :D

Thanks heaps for playing! Glad you liked it!

OH MY GOD. This is SOO good. Getting clues feels just about right. The dialogue and everything makes sense. And when you confront the pusher, It's just so epic! Man I really love this game.

AaaaAAAaaaahhh~! Thank you~!!!! So glad you liked it!

This game was by far innovative in terms of creative writing and visuals. Including mythical characters such as CthuIhu in the story really makes it interesting as well. I had a good laugh as well with the way some of the visuals looked and some of the puns you used(Especially the canon pun haha). Like I seen in some comments, this does give a feel for Ace Attorney and It would of been REALLY amazing if they ended up going to court for this. That would of been extremely intense. Overall though, amazing job on the game!

We kinda limited ourselves to one of the "investigation" chapters of phoenix wright as we figured it had the most to explore gameplay wise for a jam.

Thanks heaps for playing~! Glad you liked it!

We kinda limited ourselves to one of the "investigation" chapters of phoenix wright as we figured it had the most to explore gameplay wise for a jam.

Thanks heaps for playing~! Glad you liked it!

I can talk with sharks, I like novel with sharks https://risingpixel.itch.io/bitch-shark

I love the character art and all the Yogs-jokes! Definitely feel the Phoenix Wright influence! I would love to watch the Riddle Bros play through this as a series...

oh man, that'd be the dream~!! Not sure there's enough here for a series though :P maybe an episode? hahaha

Thanks so much for playing! Glad you liked it~!

I really enjoyed this, really fun and engaging. Funny story and great gameplay, would love to see something a little longer with maybe more characters/paths. But that's obviously not possible with the time constraints.

My only minor gripe was that the snare drum sound that mainly happens when talking to Zylus is a little loud, but other than that the sound and music were great and really set the mood, the character design was perfect.

5/5 The reveal of the Bristol Pusher shouldn't really come as a surprise. The clues were all there, but a great surprise/mystery solving game

if only we had more time! Then Ben probably would have lawyered up....I wonder... would Rythian been available?

Thanks for playing!! Glad you liked it!!

Honestly if this doesn't get into the top 10 then you've been robbed. Amazing work!

The only thing I could say is more characters, I just want to see every member drawn this way!

if only there was the time!! Thank you for playing!! Glad you liked it!!

Wow, This is definitely the best submission so far! The art is super good, I love the Phoenix Wright vibes. Also I literally laughed out loud from Ben's 'blergh' at the start haha. I would be super surprised if this game didn't turn up in the top 10!

omg! Thank you so much~! We couldn't in good conscience have Ben die without a blergh!