A small sci fi Tinder-like experience based on the characters of Sixth Vowel’s Element: Space
Submitted by David T. Marchand (@DavTMar) — 14 days, 13 hours before the deadline
Add to collection 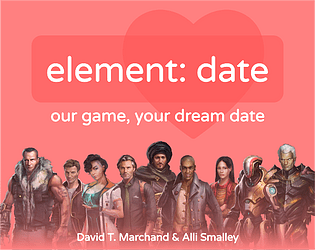 I love this one :) Great artwork, a nice variety of characters and just a bit of interactivity to let you choose your path. The dating app aesthetic works really well :)

Thank you so much <3

Love the concept of this soo much. It's like a better version of Tinder, only with fictional characters! :'D

Right on! Thank you so much.

LikeReply
Whales And GamesSubmitted3 years ago(+1)

The setting, environment and diverse cast of characters were gorgeous. Checked a few and more than once, enjoying the solid writing. The Tinder-esque interface was a great novel, and being able to pile the possible dates made it more than "choose X to date it". And I found it impressive that there's even voice acting on this. That's a rarity, and a damn good one this time around.

Still, I do have to be somewhat critic on the amount of "gameplay". With so many visual novels around on the jam, there's varying of lengths of replayability and playthroughs, and I'd say that having 18 endings is less of a feature and more of a problem this time around. I loved the diverse cast of characters, but it soon became apparent that I wouldn't get more than a few lines of exposition before getting a short ending. No time or space for development made every playthrough and underwhelming, which is a shame, given that so many characters had strong first impressions, but nothing else.

I still like it for what it is. Short on the narrative, but what's there is well written and voiced. Here's hoping there's more opportunities in the future to get to know the characters. Cheers! 🐳

Nice! Thank you very much. Entirely fair criticism. There'll be definitely more systems and interesting choices if we ever attempt something like this again.

Hm, interesting! I like the schtick, it's very clever. Each little narrative was good. However, there are some UI issues. First, on nonmobile devices, scrolling is very awkward because the natural motion (use scrollwheel) moves the whole page, and the dragging motion is uncomfortable. Second, while a nice feature for those who like readalouds, the button to disable the voiceover doesn't work consistently, and clips of audio kept coming through. These are both pretty major barriers to enjoying what the game has to offer.

The mechanic of being able to come back to characters you liked but didn't immediately respond to is completely opaque; I initially thought the chat message screenshots were of content not in the game because it seemed like there was nothing beyond the swiping screen.

I loved this!!! The voice that reads to you was a wonderful touch, great job!

Aw, thank you so much! And I agree about Alli, she should get more voice acting work.

Short but sweet. Really enjoyed it.

Is this considered complete? Slightly more in-depth dates and the ability to go on multiple dates without restarting would both be really great features.

Yes, we consider it complete, though we also knew from the start that our scope was very very small. We'd definitely add more agency, interactivity, and closure to the experience if we were to do something on this genre again.

Not sure what you mean with “restarting”. If you right-swipe multiple characters but don't date them right away, finishing a date should always take you back to the other characters you liked ready for the dating. Only when that pool of characters runs out you'll go back to the swiping screen. If that's what you mean, maybe the game could do a better job at communicating it.

Hi! This is absolutely us “finishing up something on the backburner.” We’ve been working on and off on this for the last few months, but we recorded all the voices a week before the start of this jam and I used my jam time to implement the voices, add all sound effects, fix some bugs, and put together a small trailer.

Most of the stories are based on characters from a different game we also worked on, and we have full permission by the rest of that team to use them here. I hope you like it!