Fight your inner demons while keeping your mind in balance
Submitted by Positive Zero (@blueturtlegames), IainWay (@IainWay), Eggy0 — 53 minutes, 16 seconds before the deadline
Add to collection 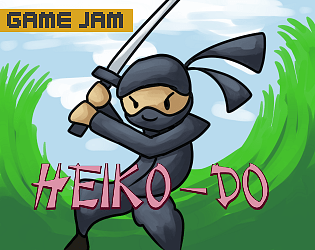 Really nice game and I love the artstyle! Just felt like the enemies were to heavy or the player too light. When I move to a dragon, all weight were on one side and the bar gets flipped over

I liked the game as a whole, though I did find it hard to get any good scores as I struggled to balance out the beam, does the player weight anything? as I couldn't counter balance the bean once an enemy was on the other end, which felt unfair. Otherwise this is a solid and well thoughout entry xD

Here is my review of this game

So gameplay wise, i felt the movement and attacking was a bit rigid and stiff at times and inconsistent at others where the jump would not allow you to move during it and would only move if you were moving but when the log rotates you auto move in that direction. While its realistic for that to be the case the other rest of the movement undermines that in a way which is why i find it inconsistent. Sometimes the player would also get hurt by the enemies even tho the enemy was facing away from the player and never really did any indication to show they were attacking or how to avoid it and even when enemies were dead they would sometimes not die because i killed them too early. The log would often tilt way too easy sometimes and other times its impossible to move which again leads to more inconsistencies. A final thing to note is that the leaderboard seems to add new scores per finishing the game which for an offline leaderboard is fine but for online it seems weird to have the same person's name multiple times rather than just moving the name around however this isnt a big deal, just a minor thing of note.

I loved the intro aesthetics and the leaderboard design and the art had a cute style to it. However i cant help but think the animations were a bit too smooth and unnatural in movement which is really its only fault.

As for the theme, i dont think i really need to say because it is very clear that you have stuck to the theme and come up with an interesting concept.

As for sound, i didnt really hear any sound so i cant review that

In conclusion, this game was a good attempt at making an interesting and fun concept with the balance leaderboard theme however im personally not too big of a fan of the gameplay since theres too many issues that i found that distract me from the game and lead to the game ending rather abruptly such as the log rotating 180 degrees so no real explained reason one round yet the same circumstances would occur the next and nothing would happen.

On the other hand i can tell you have tried to make this work and be the best it can be and for that i say good work!

While not the best game in the world, you still managed to make it in 3 days or less so with that in mind the game isnt too bad.

Hi, as the artist I'd like to chime in on the animation looking too smooth and unnatural. Unfortunately even though I'd like to take upon animation myself someday, I still have very little experience and all the anims had a very short deadline (meaning I had to get them done fast) so that might be why it looked too smooth and unnatural. I'm glad to hear that you liked the art style though :)

You are welcome! Its difficult to make a game in such a short while and even harder to make it near flawless so its expected that issues would raise up, especially since a lot of the devs have little experience in their field making this more of a learning experience. I wish you luck with your animation and art!

Also i would also like to ask if you would mind checking out and reviewing my jam game while you are here, it would mean a lot if you would try out and tell me what you thought as well as rating it. if not thats fine but it would really help me out. My game is called Interstellar Balance encase you decide you wish to check it out.

Thanks! I try to work every day to get better :)

I'll check your game out :) May or may not be able to leave a detailed review like you did but I'll try to provide useful feedback haha.

The gameplay was really addicting and easy to understand. Very connected to the theme!!

Well made game and nice to see a godot made game... The movement inputs could have been changed to spacebar to jump and mouse click to attack... That would help a lot... Very addicting game... Also 3rd place in the score board yay... Keep it up mate...

Credits, a "How to play" and a scoring explanation can be found on the projects page.