A Year-long Journey
Submitted by poard — 3 hours, 10 minutes before the deadline
Add to collection 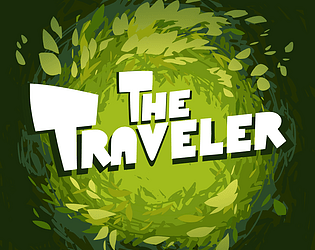 For my soundtrack, I chose to go for an OpenMPT/Modplug Tracker-like style of chiptune, taking inspiration from various 16-bit era games, recent indie games, as well as other chiptune artists such as Jayster or Tancla. The soundtrack sits at 11 tracks, totaling a little over 12 and a half minutes, so there's a wide variety of content for you to enjoy in an easily digestible amount of time!

When making the soundtrack, I imagined the game being an indie RPG that's mostly about exploring the world and conversing with the occasional NPCs rather than battling or anything like that. The story itself is about your character, the Traveler, leaving their home to make a year-long journey, experiencing the four seasons along the way, starting with spring in the 3rd track, Raining, and ending with winter in the 9th track, Snowing. Each track is a little more similar to a "moment in gameplay" rather than a standalone song like on an actual soundtrack, so you'll hear some of them transition into each other, have contextual sounds, or have sound effects and all that neat stuff.

For a more in-depth description of what each track represents, check out the tracklist on my submission's project page!
https://poard.itch.io/the-traveler

Message from the artist:
This is the first project I've ever completed, and I'm pretty satisfied with what I made, and I hope you like it too! 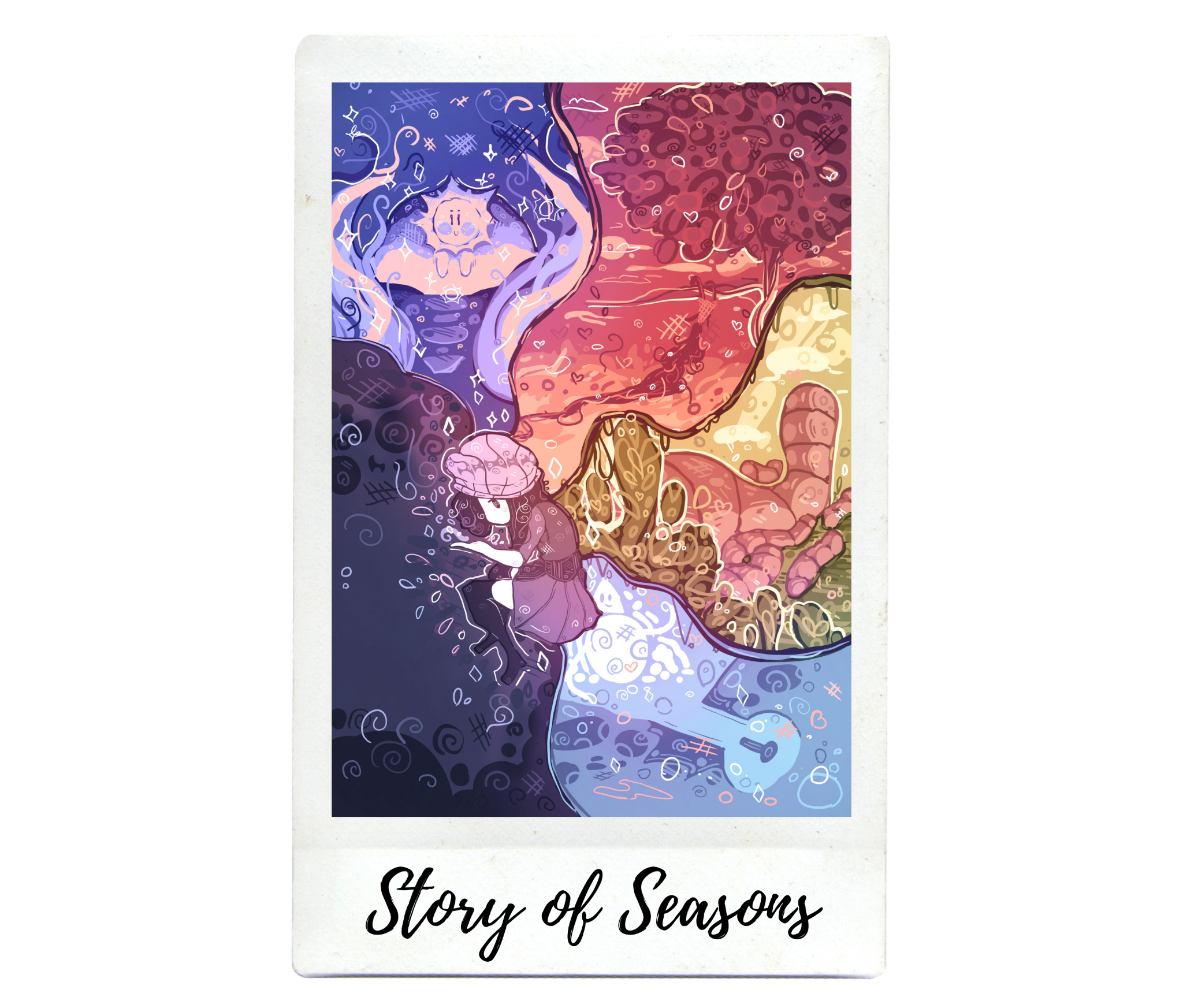 How does it fit the theme?
I chose to take inspiration from both Story of Seasons and the picture, but mainly the former.

As said in the description, the seasons the main character experiences are an integral part of the game, both signifying progression in their year-long journey, and a sense of difficulty as winter gets ever closer. This can be heard in the tracks Raining, Sunny, Cloudy, and Snowing, clearly representing each of the seasons.

For the picture, the connection might be a little bit more of a stretch, but I think I managed anyway.

Unlike the obvious idea that there are 4 seasons, the picture clearly has 5 "sides" coming out of the character in the middle. While you could interpret the seasonal songs as representing the 4 colorful sides of the picture, you might be wondering, then what represents the darkness? What I did was add a track titled, "Desolate," which plays as fall turns to winter. It's tonally completely different from the previous songs; it interrupts the flow, and that's exactly what I wanted it to feel like. I thought maybe what the darkness represents is the main character's realization that their journey would become significantly harder and more lonely as the sharp winds and snowstorms come rolling in their direction, leading into the track Snowing. I also believe it gives the track Home (Reprise) more meaning, that even after all that, you still managed to reach home and are rewarded with the chance to rest and celebrate the holidays for another year.

Submitted
Quest for The Summer
LikeReply
mchamanSubmitted234 days ago(+1)

I don't listen to chiptune, so I don't have much reference to compare this to, but u had me hooked on the title screen. "Home" transition into "Raining" w. the door was so cool, it felt so seamless. The description for "leaving the house" was way more literal than I was expecting XD. I love the slide you have in "Raining." I love the feel of Sunny. One of the ref mats for my comp was FFXV (Open World and Summer) and I get a chiptune version of that vibe and I absolutely love it. In "Unusual Character" the way you hold rhythm and your use of silence is on point. I feel like the chittering and certain fx are dialog-oriented to get the ferry? I may be wrong on this but it reminded me of dialog sound. ATt his point i'm starting to notice a pattern w/ how you do slides and I really like it. Personally, it reminds me of a relaxation day. "Cloudly" has really cool key modulations. "Desolate" into "Snowing" is like waking up to snow for me. I just can't describe the feeling, but it feels magical and awesome, and it made me really happy you were able to capture the feeling of it. I love how you brought the door transition in. That was really big brain to contextualize "Home (Reprise)" the rit into nightime was also really cool. I really appreciate this being new material. My favorite themes "Sunny", "Desolate" into "Snowing", and "Good Night". Ty for sharing these!

Great work - I particularly vibed with Home. Easily could be a soundtrack for a cool game - well done.

Nice retro vibe here! yet I find you bring some modern touch in several moments which is refreshing and stands out. Nice touch on adding some sound effects, really makes me feel like i'm playing the game!

This soundtrack was so diverse in its style and instrumentation! I loved the bass riffs in “Sunny” and the waltz in “Ferry Across the River”. “An Unusual Character” s very fun with such a creative use of sound effects. I could go on and on, but all in all this was a joy to listen to!

Submitted
Seasons to the Summit
LikeReply
AlpersiaSubmitted237 days ago(+1)

I really like the retro style in your music! Very nice work!

Snowing was by far my favorite! I very much enjoyed all the SFX you incorporated. Being able to see/hear more of a picture made the experience that much better. Bavo good sir.

Love the 16-bit vibe here.  You really captured the feel of an SNES game.  Great work!

excellent work here. I love the melodies and the jazz fusion and prog influences here. The compositions are nice and seem appropriate for a retro action adventure game or rpg.

Sounds great: I really like the sound effects and background ambient sounds, definitely add character to the experience and I can really feel the game playing out. Really love that funky synth bass. Great work!

The addition of the sound effects are really endearing ^^
each track has it's character and some are the best kind of cliché (the kind where you absolutely know that you didn't took it seriously and was in for the laugh too ^^)
the transition being baked into the music shows that you thought about the cohesiveness of this OST, also i want to celebrate your ability to create really effective melodies and to support their presence in the track !
It's really a nice little journey.

Really great tracks and a lot of 'em. My favorite is Raining. The e. piano is very dire, dire docks-esque and I love the syncopated hits in the B-section.

This score is such a tasty medley of sounds. The little foley sounds here and there are super cool. You could play this in the background and someone would think you were actively playing something.

Love all those 90s early 00s strings and bass synth. LOVE it.

Yooo, the pause moment in "An Unusual Character" so damn clever, I chuckled out loud.

Submitted
The Winds of Murder
LikeReply
John WillowSubmitted239 days ago(+3)

yo, I gotta be honest man, you really made me almost cry of nostalgia at the ending of a game I never played

I love how interesting and intriguing your Piano sections are.

I enjoyed the soundtrack a lot, the way you used the sound effects in "An Unusual character" was very creative and funny. My favorite track was Sunny.

Your use of sound effects is so creative and really helps the music flow into each other when the footsteps lead into the next song. The soundtrack is also a vibe all around!

Submitted
Search for a Cure
LikeReply
elitestratmanSubmitted241 days ago(+3)

What a lovely journey with so many stops along the way. "Desolate" did throw me for a loop and was quite spooky, a clever departure from the chipper attitude so far before that. Really reminds me of an old pokemon game. Oh and I love your use of sound effects! The sound of the front door closing to signify the beginning and end of the journey was a neat touch. Great job!