Welcome to the VOIDView game page

You were awakened by your Anabot only to know that the universe is dead.
Submitted by Cosmo Myzrail Gorynych (@cosmogorynych) — 16 hours, 13 minutes before the deadline
Add to collection 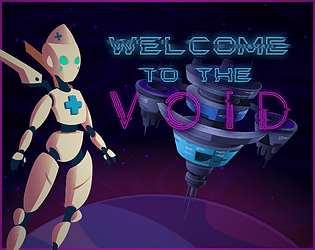 Welcome to the VOID's itch.io page

As the other have mentioned, the quality and the amount of content is very impressive for such a short jam. Very nice visuals, good sounds, TWO game-modes, a story-line and the game is long.

Really like when the story is told without interrupting the game-play to much, it was at times however, a bit hard to follow. It felt at times that the dialog bled-into one another at times, as the dialog sometimes auto-continued (I think?) making me miss parts (more my fault then the game).

While the game has a very nice presentation, I found that it lacked feedback in certain parts. The analytics of the planets where clear, you had a great "pointer" visual to find planets that helps players stay focus, health-bar, level-progression etc. all the important stuff is there, however I would have liked to see more of the smaller details. The combat for-example was lack-luster at best, the laser-hits lacked any impact, there was no great indication when you took damage (except the health bar visual), the ship felt rather "stiff"-flying in space. That I think is really my main critique, while it looks great, the entire game felt rather "stiff", think about adding more subtle animations/visuals to add a bit more "life/motion" in the game overall.

Also, while I did like the on-planet segment, I felt it was lacking from the otherwise great space-ship part. The "mouse-only" limitation was not as nicely implemented, and while the digital-buttons work, it felt like a rather cheap solution. Also the mode lacked the objective pointers from the ship-part, and while the levels where not that complex, I felt I had to just take a stab in the dark to figure out where to go, especially with the fog blocking so much. A bit to trial-and-error for me.

A great game! One of the best one so far.

I surely should have made in-space experience better. Drawbacks of an over-ambiguous project that was made in less than three days ¯\_(ツ)_/¯

But on planets? Going here and there, bumping with your robotic head into obstacles being in almost complete darkness is a part of experience XD And if seriously, along the plot, you need to search for unknown artifacts by exploring abandoned stations, so I see on-planet pointers or UI hints unsuitable. I feel that it is better to push a player towards exploration (which is rewarding as all the sideways grant prrrecious crystals).

Thank you for such a detailed review!

Ah, true. In relation to the story then that choice on the planets makes sense. Always found it a hard balance between what the story demands, and what feels best game-play wise. A middle option would then to instead have visual clues as part of the environment or dialog that at-least hint on where to go (I don't think you had that already? Or I just missed it). However, as I mentioned, I actually never did get completely lost while playing, so it could be said that the levels are already well designed already :)

Also, was diffidently a good choice to have extra crystals to gather, definitely had your desired effect. Always nice to get rewarded for exploring and making it a complete waste going the "wrong" way.

the art is beautiful, the audio is beautiful, but i couldnt actually play it, some bug was making things go completely off screen and i couldnt see some of the graphics(?) i mean, i assume i couldnt, since there were empty areas and when i press the mouse a sound comes out but no graphics at all... could be a problem with me since i am playing it on chrome in linux, but just a heads up ^^ its really sad i couldnt play it, i quite liked the little i saw

Have you tried reloading the game?? Bc I use Chrome on linux as well

I hope I'll solve the issue with a mad camera soon :\

Dang this is a long game! But its complete. This is my favorite entry so far.

Just echoing what everybody else said, the quality of this submission is crazy, particularly the art but also the gameplay (i was expecting it to end when the analysis was finished, but NO! surface level plus a followup mission).

From the games I tested, this is the best, congratz!

The screen jumps and jitters while I was playing. Aside from that, all good.

i had this problem times ten, like, the screen jittered so much that things got out of screen

Unfortunately, I had no such issues while developing it, and when I started receiving all those issue messages I had no opportunity to debug the game and update the entry D: I hope it is still cool to manipulate a flying jackhammer XD

Really nice entry. I liked the controls, the art, the particles, the audio SFX, music and the narrative. I just found it a bit too easy to get lost. I would have liked a mini-map, a zoom, or some kind of clue/pointer.  There's no frame of reference to plot a course to the planets.

I played twice, but didn't quite fill up my analysis meter. If there's a nice payoff after that, I missed it.

Thanks for the tip. I went back and played some more.

No idea why I didn't notice the pink sonar on two previous playthroughs.

I love the artwork! I'm really impressed with how pretty looking you made it! It's definitely the prettiest game I've seen so far for the Jam! When I first started, I was quite saddened after the third dead world, thinking it was just going to be roaming in dead space forever, but I decided to keep going and was pleasantly surprised by the ground level!

I feel like this is the best submission so far! You'll probably place well ;)