The Player Person, a unisex device for all.
Submitted by SpacefaceDEV (@SpacefaceDEV) — 2 days, 11 hours before the deadline
Add to collection 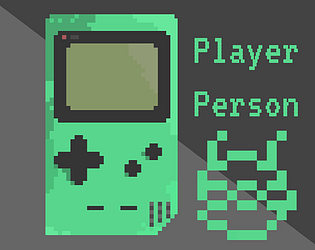 How is your game meta (within each relevant category)?
The game is a parody of the game boy and a variety of games and aspects of the handheld console. That explains the relevant categories I chose, being game culture and specific game parody's. I also attempted to make what I spoke of in game and on the itch.io page match aspects of game culture. Being language such as nub, noob, gg, and so on and the reference to programmer art.

Anything you want to say to players before they play?
Be sure to check out the itch.io page to play, and maybe read what I wrote?

Chase of BassSubmitted1 year ago

i liked the humor in this a lot - 'legit sky' lmao -and the zelda game from her perspective   -the gameboy w/ transitions was well done! :D

Thanks, your game was amazing!!

LikeReply
Chase of BassSubmitted1 year ago

Ohhhh youuuu xD thanks! -we still have a loooong way to go with it but it's been a lotta fun! :D

This was so bad.  But in a good way.  Like, all the mechanics were painful to use.  I don't know how you could do this to people.  Seriously! WHY.

Lol, I gave myself little goals to make this game a huge prank of sorts. Like every sound track had to be made in 10 seconds or less.

That makes a LOT of sense, I loved the troll of it=D

The sounds and voluntary glitches give a nice psychedelic feeling! I liked it. :)

Check out your game in my let's play video!

Mario doesn't control very well, and the parody didn't really come across strongly as I would have thought...

Ya can't jump while moving Mario sideways, which seems like a fundamental flaw. I like the sense of humour.