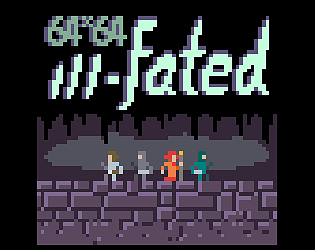 Nice game! I included it in my LowRezJam compilation, if you’d like to take a look :)

"ill" would really benefit from a dot on top of it in the main image. But overall I like your design. Also an option to turn off music in the HTML version would be nice. Still have the feeling that my game also needs it.

Hi Alex, yes in the rush of the jam we didn't have time to revise those details, the game was suffering from majot bugs for mulyiplayer gameplay and i added music and sound effects literally in 20 minutes including creating some of them.

A after jam revised version will have those fixed :-)

How was overall your game enjoyment?

Overall I found the game pretty interesting (for a small project of course), although a bit more guidance in the beginning on controls and what is going on would be nice

Thank you, I think that I will develop in the next day a "director's cut" version, with all the features I should have put in but I couldn't due to time wasted to fix bugs for let 4 players work properly.

Great work! Getting a 4 player coop game in 64x64 pixels is an impressive feat in itself! Graphics looked great and you managed to get a lot of variety in.  although I initially felt attacks were a little slow, I started to like the weighty feel of it the more I played.

Only real negative I have is that I didn't really understand the 3 bar system while I was playing, which led to me thinking the attack had bugged out sometimes (I guess it stamina?). I also had a few other bugs that came up. Understandable in a jam though.

Thank you so much BigStompyRobots!

Yes, it was extremely hard, I push myself beyond every limit reached until now giving so much time to fit lots of things in the game. Due to some bugs I couldn't manage to add all the features. Lysa, the artist, actually created other 3 kind of monsters and different environment for another level but I couldn't fit. I will release a "director's cut" after the jam with all the original idea planned for the game.

The explanation of the bar system was supposed to be in the game but I had to cut it down unfortunately. The top red bar is the life, the yellow middle bar is the stamina (it is reduced by one after each attack) and every 3 seconds you recover 1 point, the last (blue) bar is the mind, once it drops to zero, you become insane and game controls respond in different way, so you are pressing to move in one direction but the characters move in another way.

Each bar is large 5 pixel max, if you score is higher than 5 you have a brighter additional bar on top to be used. So for example if you play with the warrior, you have an additional 5 pixel wide bright bar. Once it will be reduced to zero, you will use the darker red bar. If you manage to complete the level with 10 or more life left, your character will level up and in the case of the warrior, you will receive additional 3 life points, therefore a new even brighter red bar will appear on top of the previous.

Every character have different stats, attack, attack speed, etc. to create a good variety and require cooperation with other players. I wanted to add more depth but I couldn't in so short time. For example the light system you can see on level 2 is supposed to be the one for the warrior only, the others should have a totally different system.

I will give more behind the curtains view of the game in the next days :-)

Please, come back to play it with friends and let me know of eventual bugs so I can fix it for future versions.

Nice little game, I especially liked the minimalist pixel art graphics giving each character a unique look. The addition of local co-op is great too!

Submitted
Don't Let Them In
LikeReply
Biim_GamesDeveloper5 years ago

Thank you NPJarcade, yes Lysa did a very nice job with the art and I tried to give each character a unique fighting style. Have you tried the co-op with some friends?

Couldn't beat it yet. I think I'm gonna find someone to try the the multiplayer feature. But from what I saw it seems really awesome! Visuals are neat and the music fits perfectly and causes nostalgia :D

Thank you Michael, we are very happy that you enjoyed our game, especially because you have created a beat 'em up too. Please let us know how it will be playing with your friends! :-)

Solid! I couldn't beat it, but I liked the music and graphics, especially the forest & mountains. The little wizard's cliff-plummeting pose made me LOL. Good monster variety, too.

I agree that faster attacks and/or faster stamina recovery would make it more satisfying to play, but a little kiting never hurt anybody. :)

We are happy that you enjoyed the game, when Lysa gave me the animation sequence for the death I decided to recycle the first frame for the falling. Honestly I couldn't stop to laugh as well when coding the fall, I think I played 4-5 games after each other, running to avoid the enemies just to see the player fall down :D I also slowed down the fall trigger in order to make it looks like a cartoon :-p

When players finish the first level, each one increase their stats depending on the character. You will have between 1 to 3 extra stamina points that are translated in 1 to 3 extra attack before your stamina runs out.

Please let us know if you would be happy to have a proper game finished, we might keep working on the project!

I actually liked the slow attack, maybe you could have 2 or 3 different attacks with different speeds , the slower the more powerful. Overall the game has a nice feeling.

Thank you mikiex, we are glad you like the game :-)

Due to the time limit the game scope have been resized. Originally some players have a second type of attack or special ability to use as for example parry with the shield. If we'll receive enough interest we'll continue to develop the game and add more and more features.

I played this one solo, but I might actually invite others to play it some day.

When it's not broken.

Animations are slow, and attacks don't occur until they're finished, which makes you feel like you're slicing through jelly. I also managed to get stuck on an enemy, too. And when I died the game crashed.

thank you for playing the game and thank you for your feedback.
Unfortunately due to the limited time I could give to the game, I couldn't create a nice smooth effect. However some part of the game mechanics are meant to be in that way, the first frame of the attack is supposed to be a preparation to hit, like 'loading' the attack, while the second frame and third are the attack itself. The game is more an experiment for future development mixing beat 'em up with RPG, players will be able to customise characters, change weapons, change equipment and so on. You might have noticed how attacks and stats are different from one character to another.  You can see an example on my reply to xenological below.

Bugs are normal in a prototype game done in few days, so if you find any, please let me know as much details as possible in order to fix it. If you were stuck on a Giant Leech (the first monster) while using the Warrior (first character on the left that you can select), then it is probably normal. Leeches whip you first dealing damage to your life (red bar) and mind (blue bar) at the same time, once your mind goes to zero they jump on you and stay attached to you sucking your blood until you die. I addition when your mind level is zero, you become insane and this can cause some random problem, at this stage only one is implemented, the movement controls are inverted. The game is aiming to be more a cooperative game rather than a single player, the single player just give you the desire to play with a friend. In your case when a Leech is attacked to you, you cannot hit it, a friend however can attack it and set your free to play again. The insanity however, will be in effect :-)

I have noticed the bug at the restarting of the game, unfortunately at 2 am you need to make a decision knowing that you have to wake up and go to work at 6.30 am. My options were trying to fix the bug (and not be sure to succeed) or add music and sound effects. I opted for the second one and I am sure the game is more enjoable in this way rather than with that bug fixed. I cannot fix the bug now due to the end of the jam but I will do for sure after the end of the voting. In the meantime with the above details in mind, you can try again the game with your friends and let us know if you were able to finish it. Please also take note of any bug you might find, I will do my best to fix them as soon as possible.

Thank you really much for playing and leave a comment! :-)

This is cool, I like the graphics, and the option for up to 4 players! One thing though, is I think it'd really benefit from faster-paced attacks.

Thank you very much xenological :-)

Yes, the action is a bit slow because this was for me more a test game. The idea is to make a beat 'em up with a little bit of RPG system.

You might have noticed when finishing the first level that the stats increase and recover differently from one character to another. In the future the speed of the attack will vary more depending on the weapons. As per now comparing the sword with the mace for example, you might notice that they have a slightly different speed, make different damage and push the enemies in different directions.

Unfortunately due to the time restraint lots of feats have been cancelled as for example different lighting system depending on the character during level 2.

If we'll receive a good response from players we'll keep developing the game :-)