Investigate a planet cursed with too much gravity!
Submitted by Serious Table (@serious_table) — 16 hours, 12 minutes before the deadline
Add to collection 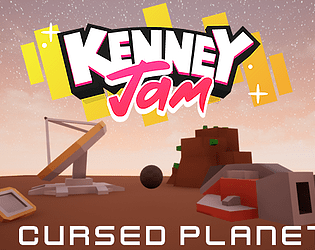 Challenging game. I included it in my compilation video series of all of the games from the Kenney Jam, if you’d like to take a look. :)

At first I was confused and a bit frustrated with controls and lack of in game instruction (didn't read the game page first), but after moving around and figuring out that space was a hover and not a dash, then unlocking the rock thrower and figuring out the other mechanics.. I realized it really was a great start and had some potential.

The only real suggestion I have is have an in game menu/prompt of some sort that instructs on the different inputs.  It was easy enough for me to figure out, but it was a frustration that wasn't really needed.

Very nice! I love games where the controls are hampered in some way, makes things "frustratingly fun."  I would have put the controls on screen, I ended up having to exit and re-read the entry page, but all in all, good idea, small scope and fun gameplay.

I really enjoyed it, great work. At the beginning I was feeling quite lost, then after reading the game page it went very smooth, so one suggestion would be to make clearer how the game works even inside the game

Stellar presentation and really well thought out puzzles! Even though the challenge is in the ship being a bit hard to control, the handling was very responsive and always made sense.

Nice little game! I don't think the terrain/sky uses Kenney assets, but that's okay. It's fun to play for sure, good job!

Concept not so bad, has some potential. Those power ups that are letting you to go on  are a good idea. I think you could think about different flying mechanics.

Nice game, challenging and fun! I really liked the difficulty of the last jump. Good job!