It's a 2D Puzzle game which can be played by one or two players. We advise you to play it in fullscreen.
Submitted by Ganius Games — 4 hours, 16 minutes before the deadline
Add to collection 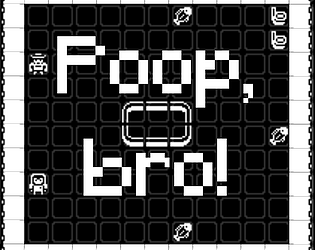 Ranked from 61 ratings. Score is adjusted from raw score by the median number of ratings per game in the jam.

Interesting game. I included it in my compilation video series of all of the games from the Kenney Jam, if you’d like to take a look. :)

Enjoyed the game.  I love logic games and the pink panther music in this one really makes it more fun   :D

Im not a big fan of these logic games, but I enjoy to play it. The visuals and the audio is good, and the basic idea is... unique

Suggestion: Make the movement animation a bit faster, and a bit queter the game over sound, it scared me

Thank you for your feedback, really appreciate it! We would try to make the movement a little faster in the updates after the jam.

Well polished and maybe a tad short but does provide quality fun, nice use of the theme!

I enjoyed the game, and played more than what I've planted to. If I may suggest - if the player makes his last move, wait to see if he picks up food instead of showing the "Gameover screen". I used my last move to pick up food and the game instantly kicked me out.

Thanks a lot for playing, we appreciate the feedback! And we'll fix that bug asap

+ Controlling 2 players at the same time is different
+ Nice use of assets
+ Fits the theme well, especially the way that the curses affect movement keys
+ Challenging

Thanks a lot for playing the game! We're glad you enjoyed it!

This was pretty fun! Any game with poop in the title gets a bonus rating from me.

Haha, thanks for the bonus rating!

Funny concept. Took me a bit to realize how the 1-player concept worked. I'd suggest speeding up the steps, but otherwise solid entry!

Thanks a lot for playing the game! And thanks for the feedback

Bro, I died when I heard the 8-bit pink panther theme. I loved it! Game was super creative and fun too. 10/10 would recommend.

Thanks a lot for playing the game! We're glad you enjoyed the game!

Great game with a lot of great polish! I think I would have really liked more 'cursey' sound effects, but the music was fantastic. The gameplay loop was fast and tight, so you could learn by trial which was great! I enjoyed the limited time between moves had some leniency for learning and mistakes, while also maintaining challenge.

I did run into an issue with random keys where I got a key that was 'semic'. Although looking at it now I imagine that was probably semicolon, in the game I had zero idea what it could have been.

Thanks a lot for playing the game! Really appreciate the feedback.

If my last step is food, I can't stay alive T_T

While other things like the atmosphere is fun and attractive.

Thanks for playing the game! I'm glad you found it fun!

pooping from every possible hole of my body! Great game guys , plus the background score  is awesome.

I liked the mechanic which you have few moves to reach the goal.

Thank you for playing the game, glad you liked it!

This game educes the feeling of pooping after a long period of constipation! GUD GAME!

Indeed it is, thanks for playing

Well yea that's the game, thank you for playing the game

Thank you for playing the game :)