A Chomper is stuck in your tail. Do whatever it takes to get rid of the Chomper!
Submitted by Marrack's Jams (@gamesbymarrack) — 3 hours, 5 minutes before the deadline
Add to collection 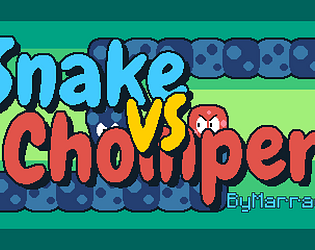 I liked the game, nice little experience pretty cool for a mobile device, tho i would advice increasing the frame rate a little bit? I found the movement too slow/choppy at a time, also i died a couple times because bombs spawned right infront of me giving me no time to react i would add an area around the head of the snake where no bomb can spawn. Also congrats for adding a Cutscene to a Jam game! Awesome dude!

thanks for the feedback, yea im working on it now. as for the framing, it moves tile by tile thats why. im mimicing the old snake games on the mobile.

Yooo dude congrats! I will sure to check it out later today, gotta get to work first! Hehe

thanks alot, the game is still bare bones but i just posted it there to see how it does. its like an experiment. thanks :D

Hi i played your game, i like the idea and the game runs fine though i would increase the framerate or the speed of the snake a bit it looks super choppy, i understand its a Snake game but still, i would look into that direction. Also the ads load fine, its a shame it covers some of the UI at top, try moving that to the bottom of the screen or on the side of it. Last, damn, its hard to unlock levels, 20 apples for the second level seems a bit much haha, considering you have to hit 3 times the little red guy to get only one apple. Good luck with your game!

in one barely decent game you can get 10 tokens so in 3 games it will be unlocked already. the banner placement is because there is no important info in the middle top portion so i put it there, i cant put it near the buttons because that would be deceiving people to click into the banner. about the framerate i actually increased it already from before because i got those comments, im thinking if i increased it a bit more, you wont be able to tell which tile youre on and might accidentally hit a wall or something. thanks for the inputs. ill look more into improving this in the future.

It feels kinda weird having to "farm" tokens in a Snake game, most people will want to collect 3 apples and move on, or something like that, more classic. Also about the ads, remember not all people got big screen cellphones, my screen is kinda small so the ad overlaps with the UI thats why i pointed it out. Something to keep in mind. Good luck dude!

before my original idea was to have medals as a reward, and if you reach bronze you can unlock the next level, but i think for not so good players bronze is kinda hard to achieve and i wanted it to be hard, because you need it for completion. so i settled with tokens. its not really tokens in a way that you will use it to spend, its just there increasing as you play more games. so in theory you can unlock and experience all the levels without getting a medal, also higher levels give more score per bite so it gives you more tokens too for less bites (or chomps) with the banner thing, i can get rid of it for now. i didnt think about that one, i thought it would adapt to the screen. thanks for the reply dude. you've been a huge help

i will be adding a more intuitive UI that updates the tokens too, so you can see it increasing faster on higher levels. and a progress bar for medals, so maybe i can replace the banner with that one. also more fruits that spawn with different effects, apple will be the vanilla one, i have other ideas, maybe it can increase speed or other things

"thanks for the reply dude. you've been a huge help" No worries man, good luck with the game! 20 days have passed since then, how are the stats of the game going, is people downloading it or no luck? i know how hard it is to get your game to peoples phones haha

its really hard to get downloads, and with a shitty game its even harder. I got the experience that i want with publishing in google play which is a good thing. Some people say that I need a boost in installs, so an admob campaign can certainly help. i think posting on forums is not enough, atleast for the kind of game that i have. so maybe a more appealing game would fare better but i think the larger publishers use admob to boost their install up to a certain point that it can be sustainable. now my goal is to make a game that will fit that criteria. maybe im wrong but thats what im seeing right now.

I personnel think this is a good game with good basic stuff in it it would be more difficult if I had seen more different levels or even see the creature eat you  so that you have to eat again to regrow your own body.
I really think you still can do a lot with this game and that is a good thing to see.

yea its actually in my checklist and i will update it after the voting period. i just dont have enough time to do it without any noticable bugs thats why i ditched it along with the random starting pattern. thank you for the feedback and i like the enemy thing too so maybe that will make it into the game in the future :D

it is a fun little game, a bit repetitive at times though, but it's still a unique take on the classic snake game, also, the graphics are really amazing :D

yea i will update this with new patterns too and other stuff. thanks for the feedback :D

Cute little game! My only critisism is that when you start getting longer and you're just curled up, it can get a little boring just waiting to uncurl, maybe it would be better for you not to get so long but add more obsticles to avoid earlier on. Another thing it would be good if you put the controls somewhere, i had to just guess until I stopped hitting walls.  Other than that, the game does what it says and has a cute story! Nice job :)

yea more patterns will come to the future. thats what eat up most of my time actually thats why i ditched it. i tried with random patterns but sometimes you will get entangled in your own body thats why. thanks for the feedback :D

Overall, it was pretty solid. A literal take on the Ouroboros theme symbolism. It could have been just me but it looked like there were only a few different layouts because I kept seeing similar snake layouts several times in a row. If a little bit more time was spent on generating unique layouts it could have bumped a few of the scores up a bit more but I'll be generous with the "Overall" rating. I enjoyed the cutscenes, a little bit of humor is always appreciated.

thanks :D yea i agree i should have atleast add 1 or 2 more layouts, i still have time to do it too. oh well haha thanks for the feedback appreciate it!

Funny intro! The concept is nice! The speed is always 1? It felt a bit slow at the start of levels

you have to get longer to advance to 5 levels then the speed ramps up. its a grind tho to get there, maybe in the future i need to put a slider in before you start the game