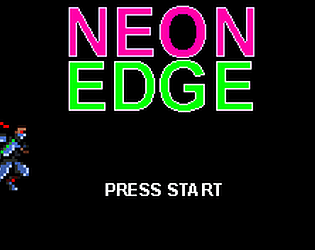 XenoneoSubmitted4 years ago
This can be played fast, if you're willing to adjust the platform's timing a bit more to be played without stopping. Shuriken was not much usable or like to be necessary for specific part of gameplay.
Submitted
2 Worlds Onside
LikeReply
Palladinthug4 years ago

One of the things about this game was that the action itself wasn't explained, but it required you to get momentum in the sense that once you started moving and acting it was easier to think on your feet.  Many of the enemies all had a pattern of attack, but as the ninja you had to be careful not to accidentally push forward on the analog stick or risk moving into them as they pathed.

I enjoyed the music most of all, but the game play itself was satisfying as well.  I'm more geared towards improvement, and I think instead of immediately maxing out the means of damage taken before the ninja is destroyed, number of special weapons like the shuriken, or max shurikens is where the game could benefit the most.

The platforming felt fair, and the diversity of enemies was enough to keep me on my toes.

I had fun once I got the hang of it. The attacking was kind of hit-or-miss for me, though, so I ended up just running and jumping past most enemies. The end boss was well designed and took me a few tries to beat. Reminded me very much of NES days. Overall, a solid effort for a prototype.

If you ever expand on this, it could be worthwhile to ease the player into all of the different moves (I only discovered that there was a dash move by reading the comments here). I'd also love to see a bit more variety in terms of obstacles and enemies, as well as a visual hint of how many hits an enemy had taken or needs to go down (e.g. show an enemy taking damage).

Music was fitting, as expected!

Hey thanks for playing!  I think I definitely could have improved upon attacking and I would have liked to have added a proper tutorial too, I'm not really a fan of doing information dumps like I did but I just didn't have enough time sadly.  I did add a visual and sound indicator for when an enemy takes damage but it probably would have been better to make the slash stand out more and maybe make the sprite flicker or go red, or something along those lines.

Solid, old-school gameplay. The dash attack felt pretty awesome to use. Everything played pretty tight and precise, except for one thing: When you get hurt, the shake plus the controller vibration plus the big white circle around your character can be a little bit disorienting. One of my deaths happened because one of the laser enemies hit me 2 times in a row while I was confused at the hurt effects. Still very enjoyable. It is a shame it is so short

Awesome old-school looks, awesome soundtrack. I previously said the hurt effects were kind of disorienting, but the controller vibrations were actually a neat touch. Some parts of the art still need polish however, like the death and hurt effects. The dash and air attack look superb!

There was no story to be found, but that is a non-issue for a game like this

Gameplay is solid and has the "fun factor" I think good platformers need. It certainly draws players in so they complete the level. I think this category loses out a bit since there is not much more to see after the first level

Expand this with more levels, more enemies, more bosses, polish the art and you have a really great game here. While I think the dash mechanic is awesome, I still feel this needs just a little extra originality to stand out. The Ninja Gaiden influence is pretty obvious and you already have pretty fierce competition in the indie market in the form of The Messenger

Hey thanks a lot for the detailed review, I really appreciate it!  You've given me some very helpful pointers here and I definitely agree that the game could use an extra twist on the established formula.  I do want to add additional sub-weapons other than just the shurikens and I think that'll help a bit, but, I think I'll need to come up with a gimmick or feature that changes the core gameplay more dramatically if I really want to stand out.  Maybe not something as crazy as the Messenger's 8 bit to 16 bit time travelling, but definitely something that gives the game a unique selling point and makes it stand out more.  Once again, thanks for the review!

If you have the time, could you check my submission? I would like to get as much feedback as possible from everyone, so it would really help me out!

Thank you, I'm glad you enjoyed it!

Great job on this. Solid dose of nostalgia with cool music (as to be expected). Felt a bit fast, and controls took getting used to, but after an adjustment period with dozens of deaths, it was a lot of  fun.

Thanks, I'm glad you enjoyed it!  Sorry if the speed is not to your taste, one of the biggest problems I had with the games that mine is inspired by is that they're too slow for me, it probably also doesn't help that I play a lot of Sonic either haha.

Very awesome, I had a lot of fun with this! Definitely too short, I want to play more! You capture the feel of a classic NES game (right down to the awesome music) with all the necessary updates to make it a smooth and enjoyable experience for today's market. I really hope you continue with this project and look forward to seeing more of it!

Thanks!  I'm glad you enjoyed it!

Your instructions don't say how to jump. The first time I tried your game, it displayed in a borderless window in the middle of my screen. The second time I tried it (which was to check what the instructions were), it went fullscreen.

Oh wow, that's the first time anyone has actually pointed that out, sorry!  The keyboard control for jumping is space, I'm surprised that I overlooked that even if it was done at the last minute.

Borderless window is disabled in my startup options on gamemaker and the game is set to go fullscreen when it starts, I even made it force a display reset and force fullscreen again with initialisation code to fix a refresh rate bug, so I'm not sure why it's doing that. I'll have to look into it, maybe starting it in a x2 or larger window would have been a better choice.

I died lots, but dying lots to a jamming soundtrack was -great- Once I got the hang of things, I did much better! Managed to beat the boss on the third try! The only gameplay thing I found strange was that sometimes attacking made me do a dash forward attack and I would take damage at the same time as hitting the enemy. I died lots to that and eventually relied on jump attacks and standing still to attack.

All the same, this is just solid fun. The boss battle was great for a first boss!

Thanks for playing Maki, I hope you didn't die tooo much!  When you move forward while standing or crouching you perform a dash attack based on that stance, the problem here is I think that the hitbox object is being destroyed a little bit before the dashing attack ends, as a result of that you get these rare instances where the invincibility frames are ending too early and making you take damage.  I've been told there are instances where it happens with the normal attacks too so I'll need to look into it.

Also, I apologise for the short length, I had a very tough time creating everything by myself so in the end I decided to try and prioritise quality over quantity, the good news is that making more levels will be a lot easier now that the core mechanics and systems are in place!

Honestly, that's the right choice. If the gameplay wasn't focused on in favour of more content - then people might not have had enough fun to even reach the further stuff. You prioritized the right stuff, so no need to apologize, I just want more : D

I died a lot, but I was trying to go too fast through the level. (look I grew up with sonic) Once I slowed myself down and thought a little more about my actions, I did fine. Also I was never too chaffed about dying because the check points were generously placed. I hope you can iron out the dash attack thing though.

The boss fight was my favourite part though. It was a lot of fun, the strategy was nice to learn, and the progression of the bosses movesets were good.

I also grew up with Sonic, which is probably why the game is so fast!  It'd be really cool to make the game more speed friendly whilst keeping the ninja platforming and combat intact.