​A Journey of a just dead character to heavens and hell.​
Submitted by Xenoneo (@Xenoneo201_) — 9 hours, 50 minutes before the deadline
Add to collection 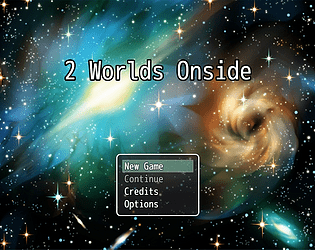 This is a strange game.  It has some charming points, but not quite enough for me to comment fully on.  The story is an interesting variant of Dante's Inferno.  The exploration is decent, but the one thing that bugged me is the typos.  There were so many.  I can forgive it since you're not a native English speaker, but it impacted my enjoyment of the game a lot.  Would like to see some form of combat in the future, but I understand if that wasn't a concern.  I like where it's going, but I don't have enough here to make a full judgment on.

Thanks for playing and so sorry for typos. I even checked spelling of the words I wasn't sure but it seems it wasn't enough. Of course I'm willing to do a redo on game and adding battle, but I'm not 100% decided and ready for now.

I've thought about battles in your game probably far more than I should have, but if you're still planning to continue working on this game after the jam, here's a suggestion for combat.  Instead of having a traditional "battle" like in most RPGs, you should have a morality variable in game.  You can encounter various NPCs in the game, either randomly or in the story, where combat takes the form of doing good/evil deeds to an entity.  If you do nice things, your morality goes up and you can ascend to higher levels of heaven.  If you do bad things, your morality goes down and you can descend to lower levels of heaven/hell.  I imagine this as something similar to the ACT option in battling in UNDERTALE, if you've played that game.  That could be a way to replace the story triggers and make "combat" more meaningful.  Another thing to add, this game does feel more like a walking simulator than a proper RPG.  Just putting that there with not much else to say on that.

Yes I had some kind of battle in mind without HP so I think I should replace it by morality, but because going up in heavens doesn't have meaning in story other than first part of game where the main character is completely pure and can go all the heavens down, Only bad techniques are needed. Angels can do good techniques to stop the characters. Fixed number of battles in both as story events and lying on the field. hard part that needs more thinking is the techniques and how to obtain them and levelling up in this short game that even with battles added I don't think it becomes more that two hours.

For now I'll only fix some events, and this version maybe for some other time in future.

This was a hilariously weird game. I have no idea how you would plan to expand this into a full-fledged game, but it was a fun experience none-the-less. Good job!

Thanks for playing. The full game would have had options for the evil deeds, also for the other characters of the party, a different story for god, and also a battle system without HP and dying because everyone is already dead. I'd like to make that full-fledged too, but I don't have time for it now.

The game... well, what can I say? I couldn't figure out what to do, the writing was pretty bad in all areas and it made no sense. I never got to see much of any gameplay as it played out like one long cutscene - which I wouldn't mind if I could figure out what I was supposed to do or was going on.

Thanks for playing, also the video I really liked it seeing someone playing my game. I'm not native english so sorry for bad writing.

Making no sense is because I wanted it to be  this way. This is what I think heavens would be, if it even exists. I mean no one being good enough to enter it and even it'd be boring.

Being like one long cutscene is because this is a short game with the ending, not a demo so I wanted to explain everything.

about the gameplay I didn't have time where I wanted to add battles. and by the far you played it, everything was still peaceful.

I gave this game a go today, everything is kinda simple, but  the way you manipulated events and control their movement is nice,  that's very great for your first games

Thanks for playing. May I ask how much did it take to finish?

Actually because of work i was only able to play until  main character talk to his 2 neighbor kids then moving to some strange place with golden statues. I will try some more when i am free = ) the concept is nice  so far

Ok, so the game starts with the player dying and being sent to Heaven. However, as there's nothing really to do in Heaven, you decide you'd rather go to Hell instead. In order to move from Heaven to Hell, you decide to do some bad things.

The game could be described as being quite random. In the beginning, it is not exactly clear what you are supposed to do, but the lack of NPCs helps in this aspect. Talking to NPCs mostly advances the story or at least gives you hints on what to do next.

The main strength of this game is probably the somewhat wacky characters. It's probably the first time I've been accompanied by a tree. Too bad the game suffers from misspellings and sometimes unnecessary crude language.

The graphics and sounds are mostly RTP stuff. There are some items I don't recognize, but they go quite well with the chosen style.

The maps are dull, and there is one map that suffers from either bad passability or bad eventing. I'm talking about when you are in Hell and need to push a sleeping angel into a dark pit. The pushing event works alright, but sometimes she just did not move. I'm suspecting there was an invisible event blocking her path.

The ending was somewhat anticlimactic. I'm not sure on how to go on adding to this game, I guess the author is planning on adding some combat or something?

There's certainly some effort put in the game. Too bad the presentation falls a bit short. Might be worth your time if you have thirty minutes to spare with nothing better to do.

About pushing angel I made corners impossible to stand for angel, otherwise it could stuck at corners and no pulling. There are also 2 or 3 invisible moving events and they're bacteria and virus. As one of NPCs point be careful not to step on them.

Ending and god's origin changed to have a peaceful ending cause I didn't have time for battles.