Choose a weapon. Change your path.
Submitted by Craftsman42 — 16 days, 6 hours before the deadline
Add to collection 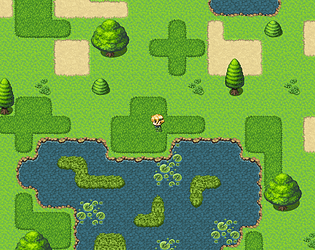 I didn't find anything particular about the game, but the maps styles feel similar to mine.

Pretty simple and to the point. Having a dash button could have helped immensely. Not too much to say. I think it needs something more.

I'm not sure if the Minotaur battle was the end or if it was bugged. I lost the first time and tried to go back in. He challenged me again and I won, but nothing happened, so I tried getting in the cave again and the battle just kept repeating, so I had to stop there

Pretty basic use of the RTP assets. The dead tree looks a little weird

The multiple weapon choice was a nice touch that could make players do multiple runs. This needs much more in the gameplay department to retain players however

A game like this would disappear amongst the sea of RPG games that look similar. You either need a more concise gameplay mechanic or an unique art style to distinguish yourself

Although I am disappointed in myself that I failed to impress you, I completely understand why you chose to rate it this way.  I have more plans in mind for where I wanted to take this game, but for the contest, I just wanted to put down the core mechanics of this game and make something that works.  In that end, I think I succeeded, but in hindsight, I see I confused "room to grow" with "not enough to expand on."  This isn't something I want to give up on, but it may well be necessary for me to continue this on my own for a while.  Thank you for your feedback, and sorry for the late reply.  I wanted to take a few steps back and post a comment objectively rather than have my reason blinded by a negative response.

Am I missing something? I don't see any files to download in order to play this game :/

I fixed the problem.  Apparently, I had the files hidden and not able to be downloaded, which I quickly changed.  Thanks for the heads up, and sorry for the inconvenience.  If you play it, I hope you enjoy.

Thanks, I was able to play it now! Had some fun with this short puzzler, though it was a bit easy and I wish more time travel was in the demo though :)
One suggestion I have is to let the player dash - since there is a lot of moving around and going back places due to it's puzzle nature, being able to move quickly would be very nice. And one bug I found, when finding the switches in the flowers, it left behind an invisible impassable tiles.
Good job overall, I hope you continue to work on and improve your craft!

Thanks for the feedback!  I will definitely keep your suggestions in mind as I move forward.

Hello gamers.  This is the first time I've tried something like this, so I am open to any constructive feedback, positive and negative (especially negative.  There's no way this is flawless.)  Thank you for your interest and have fun.