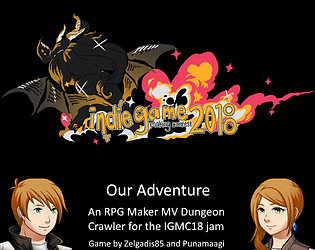 I really enjoyed this, it was a fun and unique experience! Aside from the whole premise and gameplay, I also like all the interactions with objects. One minor bug is that the character HUD dissapears from the screen after interacting with the object - looks like the text box appears over it, then it doesn't re-appear afterwards (at least in some locations in the cellar, maybe it wasn't everywhere?). Great job, I hope you keep up with this as I would like to continue playing!

I'd prefer to walk around the town instead of going through the menus. also if main characters could have conversion with each other that would be better. Dash only worked with down and right I think. Other things were just okay, considering it's a prototype.

Storyline: You and your sister go out to become adventurers. Adventurers all seem to come from all walks of life, but all want gold and glory. Also, there seems to be some evil force somewhere. It's a pretty average storyline. You need to name both your character and yourself. The other adventurers you get on your party don't talk either and are just random dudes, so don't expect much from them either. The town is pretty active, so you'll get most of the storylines from the people you talk with.


Controls: Pretty much standard stuff. You needs to choose from a list of things to do in town, from shopping, to resting and of course the quests. The battles were pretty difficult starting out. I played the game on normal difficulty, which gave you a handicap if you died. Unfortunately, my sister died a lot, and the others weren't as hard to take down either. Perhaps I needed a healer, but random battles shouldn't take that much out of you at the start of the adventure. You choose the class for each of your two characters, which is fine, but when your mage is getting curb stomped with one hit, maybe it's time to test the difficulty.


Presentation: Some good artwork for the intro and the town you enter. RTP for the most part, when you get into dungeons. There are some imported battlers. The game looks and feels ok.


Fun Factor: This was an average game for me, mostly. The artwork was charming, but the battle system works against it.