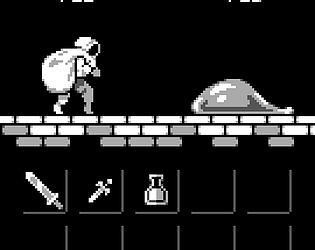 Source
Not at the moment

Participation level
This is my first time

I love how simple this game is. I got pretty far, but it seemed to be endless! If there was an end, I did not make it. Loved the music and sound effects. I, too, wanted more variety like Phil said, but all in all, nice little mobile game.

I like the concept! With more variety I can see how it could be the base for a really nice mobile game. The pixel art is perfectly fitting, love it :)

I don't think I see the theme in this game or at-least it's not obvious.

I did somewhat enjoy the game. although there isn't much too it, the concept is sound and I see the potential, but in its current state its a bit lacking in content.

Simple but perfect. There isn't much else to say.

I’m always a sucker for pixel art, so you’ve got me there. The black and white pixel art is simple but it looks great. However, animations and effects would heavily improve the game.

The game was a little loud, and due to the lack of settings I had to manually turn it down in my volume mixer. Other than that the music sounds great. While there isn't much going on in the game the sound effects fit the game.

Although I haven't seen a game exactly like this with the interesting inventory based gameplay. The turned based combat reminds me of Darkest Dungeon. Further expansion on this concept can solidify it as its own game.

Overall the concept is interesting and I can see myself playing this on my phone if there was more to it.

Heartbeast, I would just like to let you know that I'm a fan and I didn't even know you were participating in this game jam. You were one of the first youtubers I’ve followed for game development and you had a big role in inspiring me to actually start developing games

Thank you for the feedback :) Glad you have enjoyed my videos

Great work! Enjoyed killing many slime's and rat's with my time in the game XD

I really enjoy games that are simple with addicting mechanics. Your game has that! It's fun to try to min-max the attack, heal, and recoil. Your music was SO good. I see the game becoming exponentially better with more items to use and deeper story/progression.

> I can't stack items that are the exact same

> I saw exactly 2 enemies. That may be because I didn't get far enough (which I doubt, I got pretty far), or  because there are only 2.

> What's the point of keeping Red Potions? Just use them directly

> Wayy too luck based.

> No way of telling how far I got

> I now have 10 dragon swords. It has no use. What I mean by this is I get farther and farther, but items are less and less useful. The only ones that have a use are throwing daggers and red potions

Conclusion: Not enough content. That's the only problem. There's very very little content. I'd recommend adding a resting point, because it pretty quickly gets just "how many red potions can I drink in a minute"

-Wasn't able to implement item stacking in time.
-Yup, only 2 enemies.
-The only point in keeping them would be if you already had full health. Atm not much reason to.
-Luck based. Could you elaborate on that?
-You pretty much got as far as you needed to test the concept.
-The theme is a stretch tbh (destroy enemies harvest items, I wanted to add harvesting enemy essence but that feature was cut). I had an idea and went with it even though it didn't really match up with the theme. I was using the jam as more of a time constraint for making a prototype than anything. Worked like a charm for that.
-Yeah, your final conclusion makes sense. That is okay, though. I was able to test the basics of the idea and I'm happy with that. Lots of stuff I added were really last minute and not that balanced. I do have one question for you, though. Was there a part of the game that you enjoyed? You're feedback is helpful but generally critical (not a bad thing) but I'm considering putting more time into this concept so I'm curious if there was something in this rough prototype that you think has potential.

I like the main mechanic honestly, but the problem is really the amount of content. There was like 4 weapons in the game, which made it repetitive fast, and you end up with a bunch of the same weapons, which has no point (well, on the swords, but that's beside the point). The mechanic is smart, just doesn't work with so little content.

To answer your questions, when I say luck based, I mean that you surviving depends only with the red potions dropping or not.

I agree with Bitron that this could be pretty good as a mobile game, but only if it has a lot of content, because your mechanic only allows that

Perfect! Thank you so much for the reply. This feedback has been very helpful.

First off, congratulations to submitting!
I like the visuals of this, music is good too. Concept has potential!

What I am missing is some kind of progress in the game. My bag was filling up with items, but those didn't get better over time, nor did the enemies get stronger.
With increasing difficulty and a score system or a story to tell I can see me playing this in the subway on my phone.

Thanks! Yeah, just basically ran out of time. Wanted to try out the concept but it clearly needs a lot of work still. I decided to submit anyways because the last few jams I entered I didn't submit and I think it is important to submit even if you didn't get to the point you wanted to.