shoot 'em up with a twist
Submitted by Bitron, Artificer-111 (@111Artificer), ambivorous (@ambivorous) — 2 hours, 37 minutes before the deadline
Add to collection 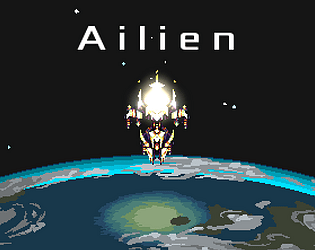 Source
Not the full source, but you can always ask!

Game description
It's a Shoot 'em Up. Buuuut with a twist.

Amazing visuals and I really like the ship hacking aspect, haven't seen that in a Shmup before and it's fun and motivating to cycle try the ships out. Beyond that, it's a well done but standard feeling shooter that plays a bit too hard and chaotic for my personal taste. The screenshake is a bit overdone, making me almost nauseous at times. The audio is well done but when there's a lot of action going on the mixing adds to the chaotic feel of gameplay.

That's some great retro vibe there, Impressive graphics! The hack idea is a nice twist in a classic genre, big enemies can make us stronger :)

Whining first - I wish there was a prompt or visual indicator when I was within hack range, maybe a bright outline of the ship you would hack so I knew when it would successfully grab a ship, sometimes it didn't possess them when I thought it should've. And having the death mechanic require possessing another ship fast enough was kind of a bummer when no ships appeared. It's probably a good idea to plan ahead and replace the ship early, but still felt like I got punished harder for dying depending on where the bad guys happened to be flying. And lastly I agree with Wing's point - a brief invulnerability after hacking would be cool, I believe you have a cooldown in there already so I think it'd be balanced.

It was so much fun to blast apart all those ships, and the hacking mechanic gave me this subconscious feeling that when a ship felt overpowered, I "earned" it because I had to steal it first. The little sparkly background and the minor bloom on everything gave it a real sense of wonder, the visuals were overall amazing.  There is already a great sense of progression and excitement when a new big enemy ship shows up, but also how you leave the surface of the planet and then there are different landmarks like a distant galaxy as you progress, really helped the sense of going somewhere. You earned a high rating from me, one of my favorite entries.

Loving the hard arcade polish that's been done on this game! It's pretty fun, and I love the creative twist you implemented (you can hack into literally anything!). I only wish there was some small invulnerability when you hack a thing, because in most cases it takes damage instantly.

Submitted
The Good, the Bad, and the Veggie
LikeReply
rocknightstudios285 days ago(+1)

I love the AI taking over enemy ships idea! The gameplay is hard, as expected, but I really enjoyed it! Well done!

Hope to see more of this in the future! neat idea! loved it.

Harvesting ships to take control... is genius. My heart stopped when there was a big ship to hack :droolface:.

The ships might need balancing. It seemed like I could play as 1 ship the whole game and it seemed OP.

You actually made it to the end? :O
Congraz! :D