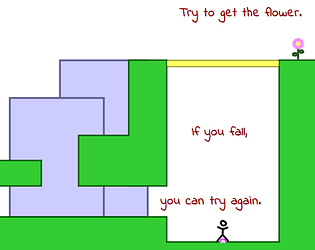 Whaaaat! This game has a mind-blowing twist! It's so subversive that I sat there for a while trying to figure out if it was possible to beat "level 8"

Hihi, I had a few bugs after I understood what to do in the last level (I tried a lot of things related to the solution), but it was so great to succeed.

Very interesting game. The final puzzle definitely makes this great! I was starting to get frustrated at restarting the game, but realised that restarting somehow related to the solution.

Beating the last level really did require some out of the box thinking. I love how it's technically possible to beat the game without refreshing at all!

Submitted
One Way Out
LikeReply
bcmpincDeveloper3 years ago(+1)

I wanted to do something where not refreshing would allow you to finish the game with way fewer restarts, but haven't really come up with a nice way to implement that. Synchronizing picking up the flower would work, but does not entirely make sense within the puzzle.

Loved it though! The solution was very unique. I don't think I've ever seen a game do something like it!

That last level's solution was so awesome!!! Loved it.

I play too many puzzle games and I will always remember that last level as one of the most top-notch creative ones. I kind of wish you didn't have to start from the very beginning every time you want to leave a clone, but I understand why you did that. Maybe starting from the same level you refresh the page from would work?

If you keep working on this and you keep going back to the start (or maybe checkpoints?), you could incorporate that fact to have some cross-level puzzles. Thanks for that last level! :D

Submitted
The Only Juan: The Adventures of The Jelly Knight
LikeReply
bcmpincDeveloper3 years ago(+1)

I really wanted to run with the idea that restarting the game does not restart the game and instead puts you into the one and only game with a new avatar (and a new page to control it). That first hint is also really important, but doesn't make sense until people progress further into the game. I also want restarting to be consistent regardless of the method used to restart.

What I could do is change the first level into a level selection area where there's a flower for every level unlocked. Though I also like that players think they completely restart the game until they catch up to the point where they did restart. A checkpoint for after the stepping-stone level could also work though.

It's hard to think of puzzles that can match that final puzzle in the game, but I guess a cross-level puzzle could at least come close. If the game remains popular after the game jam finishes I'll look into expanding it a bit.

Interesting idea well executed! Threw me off a few times! Having to redo all previous levels is a bit tedious time wise (especially if you repeat a mistake!) but I understand that is probably part of the design so not really a complaint. Good job!

That is indeed part of the design. I could've easily implemented a button to restart the level, or a button to restart the game, but the choice for F5 and it reloading the page is deliberate. Restarting the game should feel like restarting the game. I actually wrote a custom handler for F5 just to be able to give that warning/confirmation dialogue box. It's all yet more hints to how to solve the last puzzle and should make total sense once you solved it. Did you manage to finish the game?

This game left me mind-boggling. In the last level I'm dealing with hints and in it I start thinking about "How can I beat this level?" and then "How can I apply those hints to beat the level?" and left me on about half an hour. I know some people are faster in terms of their creativity and I appreciate that, but I'm slow and really bad. I have a shifting problem in my mind that prevents me from thinking into what I'm facing at the moment. Great puzzle game. Not sure if I'm going to beat it, guess I'll have to give up until I come up with a solution, plus some other people were able to beat it!

Wow, half an hour? That's dedication! The solution to the last puzzle requires some serious out-of-the-box thinking. I believe so far only dimuslv managed to solve it, so don't feel bad for not being able to solve it. They have a really good hint in the comment below. A different approach you could try is to play around in the first level trying to break the rule that there is only one game.

I actually did it, a mind-boggling idea for sure. You do give a lot of hints, but it becomes really apparent only when you got it.

WARNING: If you leave this page, you will lose control of your avatar.

But, in the last level, you'd like to keep control of him, right?

Submitted
Just One Input (Per Screen)
LikeReply
bcmpincDeveloper3 years ago

Congratulations and thanks! That's a really good hint too.

I was starting to get really worried that no-one would manage to solve it. I really wanted players to take a step back on that level and go over everything with the idea of "wait, that doesn't work, what did I miss?" and get that sense of victory when it finally makes sense and they do solve it. From a puzzle perspective I think it would be better to introduce the final puzzle at the start of the game, so players already know what they're up against when the game's gimmick is being introduced and know that their initial interpretation might not be the right one.

It was halfway into the jam when this idea popped up in my head and I simply had to implement it. I chose a platforming game as the medium, as that seemed to be the easiest to implement while still being enjoyable. Obviously, I focused more on the controls and level design than the art, but it's a design challenge after all. Having only 24 hours left and this being my first game jam, I'm really happy with the result.

This is a neat idea, but having to play through previously-beaten levels repeatedly does slow things down quite a lot.

I'm aware of that, though this is conscious design choice. There is a reason why you can't restart levels and why refreshing the page is used to restart the game, but I can't tell you without completely spoiling the final puzzle of the game. I have tried to keep this into account though. Most levels get shorter or easier when beaten. Level 3 can be made easier once you've partially figured out the game's core mechanic. I've kept the game short. There's only 7 levels. And the text is not just fluff, but contain hints to solving the final puzzle. So it has it's use for players to be able to read those again.

I absolutely love this game! The puzzles get more challanging with each flower you pick up and this rogue-lite feel that your progress of the previous run wasn't in vain makes for some addicting gameplay. Personally I would have enjoyed jumping via the up-arrow and a slightly slower character movement but that is knitpicking on a very well thought out and executed idea. Great Job!

Thanks! For the character movement speed I had to strike a balance between having a character that is slow enough to feel controllable and fast enough that replaying the game does not feel like a grind. I had thought about adding 'up' as a jump key as well, but forgot to actually implement it. Did you manage to solve the final level of the game, the one that cannot be solved alone, where it all comes together and you have to apply what it means that there is only one game?

I haven't yet. But I'm determined to beat it.