A very rushed game made for GMTK Game Jam 2019.
Submitted by dimuslv — 1 hour, 22 minutes before the deadline
Add to collection 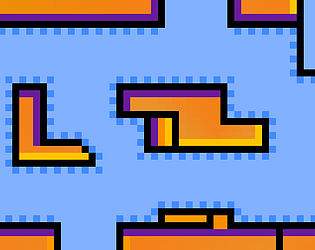 It's definitely not for me, it's too frustrating to keep reloading the page and starting from the beginning (I read your reasoning in the comments and I get it now) but still, it's very creative and it fits the theme really well!!

Having to restart from the beginning makes the game a bit tedious, but I'm sure you're familiar with that feeling ;). I think you can improve the levels somewhat by making them less time sensitive so the game is less reliant on timing skills and more a puzzle game. It's the best take on the theme I've seen so far. I managed to get to the crossroads for the second time, until I decided to give up.

Yeah, there are some tricky timings, which weren't really intended but still left in the game. I also think I made the puzzles a bit too hard, which you can't really feel when you yourself know perfectly how to solve them and are just thinking how to make puzzles that don't seem too obvious to yourself.

For example, for the crossroads(which I guess is the room in the thumbnail) you need to keep holding left and down two rooms earlier, then in the next room you go on the other side of the wall and start holding right, and then you enter the crossroads by going diagonally down-right, so you can enter the room on the left by releasing down-right and starting to hold left at the right moment(which is a bit of a precise timing). Both left paths are red herrings, which seemed to make it "complex enough" for me, but in reality, it's pretty hard for others to figure out.

I'd actually love it if someone managed to beat this, there's a last set of intertwining rooms(that also involve shooting some monsters) when you enter the top-right exit of the crossroads, which are also hard, I guess, but I think it would feel great to figure it all out. If anybody tries it, here's some tips: keep holding buttons; when you fail, always think how you should have done; the first time you enter a room there's usually only one exit you can reach, so find it; when you get to a dead end, it's not the game laughing at you, they are essential parts of the puzzle.

But even though I made the rooms too hard, the thing that amazed me is that it's even possible to make complex puzzles with this simple idea of having just one input per screen. Maybe it could be expanded so much that I could try making a longer game? Maybe.

I really like the idea, but I can't seem to get the reset to work, so I have to reload each time I mess up. Otherwise I'd probably try to beat all of it. :)

You can only reset if you have an input left! :o

But it's right, I really feel a bit controversial about this. I wanted for the game to stick to it's idea, so pressing "r" also counts as an input, but was it worth if it can damage the user experience quite a lot? idk.  But anyways, by pressing "r" you also start from the very beginning, so it's much the same as reloading the page, only a bit faster and handier.

Really fun idea, keeping input between screens and all. Great way to follow the theme while creating interesting scenarios!

Late to reply, but thanks, I'm glad you enjoyed it! :D