Throw a surprise party for your cousin without being caught!
Submitted by bompi94 — 1 hour, 59 minutes before the deadline
Add to collection 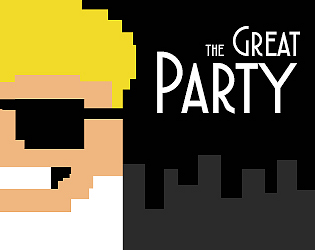 Fun little game! I included it in my GameDevNetwork: The Big Festive Game Jam compilation video series, if you’d like to take a look. :)

That was a really cool concept and fun to play! Well done!!

Thank you for playing! Glad you liked it :)

What a cool concept! Really nicely done, especially liked the sims-style voice lines. Some mechanics to affect Jimmy's movement would be a great addition

Thank you for playing and the feedback liamsorta!

Affecting Jimmy's movement could add some deepness to the gameplay, will think about it for sure!

Thank you for playing and leaving a feedback randomphantom, glad you liked the aesthetics!

haha! its really interesting when i carry a lot of people behind me. i like this feeling, that i call a lot of people to attend a party! And the artworks in first screen just like comic. Really special!

Thank you for playing and leaving a comment! We are glad you liked the comic style of the intro. That crowd can get very big in no time :)

This is a pretty great game. The art was great, the controls were pretty good, having the townspeople jump up and down when you could invite them was very helpful so you didn't have to check the invite list or try to count all the people swarming around you. The chatter and voice acting was an incredible piece of polish (except you couldn't really make out what they were saying because the music was louder). The game itself was very fun. It was more challenging than I thought it would be. A couple times I lost and retried and just ran around picking up people, thinking it was pretty easy, but then I would get sloppy and Jimmy would spot me and chase after me like I owed him money or something.

I have to ask - why are we throwing a party for Jimmy? He seems like quite the ungrateful little guy. I mean, I had  Batman and Superman at his party and he was only 42% happy. Why does he love that panda so much? I eventually convinced the panda to come just so Jimmy could be happy, but I can't help but feel Jimmy doesn't really deserve a cousin as great as Marcus Tempest.

I had some trouble figuring out to press space to get things started in the story part because it doesn't say anything about space in the controls. I tried clicking and moving around at first. Then when I got in game, I had a hard time finding where I was. I think I was confused by there being a blond guy in the center of the screen and I thought it was me. I tried moving for a bit and he didn't move. I did figure it out eventually that I was in the top left corner. I think something like a fade out would work wonders to fix that. Like start with a small circle around your character and everything else black, then expand the circle to show the full screen. That is if it was even a problem for anyone other than me.

Hey Solrun, thank you very much for taking the time to play the game and write such a thorough comment!

The chatter is actually unintelligible because it means nothing at all, is just gibberish :)

Jimmy just loves pandas THAT much.

To me it felt natural to press Enter or Spacebar but it would have been better to place some arrows on the screen or to let player just click to advance in the initial comics.

Highlighting the starting position of Marcus is a good idea, could do it in the future.

Also, congrats on beating the game :)

So fun to play and the music matches perfectly with the game, good job man.

Well, it's a great idea and the art looks great, good music.. but i couldn't get the controls to work with 3 tries. first i got stuck on the first screen, then i figured out that Enter turned the page. then i checked out the invitation rules and got stuck on that page and never did figure out how to get back to the game from there. reloaded and it wouldn't load. With some work it could be a great little game though!

Hey, very sorry to hear that! From the invitation rules page you can get away by clicking the red cross in the top right corner of the screen.

If you are interested in the game and you are still having trouble with the webgl version I can provide you a desktop build to try it out.

Ah, yeah I saw that and tried it a bunch of times >.<  I think it's just a browser thing to be honest, not specifically your game's fault.

Ok, if I can be of any assistance let me know! Thanks for trying the game out :)

Was very fun to play! Cool idea! I especially liked the feeling of being chased while still having an actual chance of getting away.

Hey, thank you for playing! Glad you liked it :)

Matches the theme well. This game has a lot of style. The sound effects are a nice touch, and the music fits well with the overall aesthetic. The gameplay isn't anything groundbreaking, but it is an interesting take on the PacMan concept. Good job.

Thank you for playing the game and taking the time to leave a comment. Glad you liked the style and the music :)