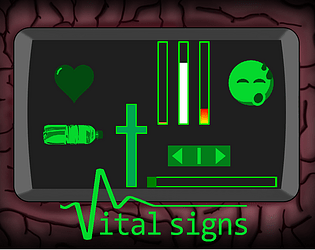 I quite like the simple yet effictive design. Also how you can play at your own pace with the speed you are running. Well done :)

Agree with one of the others that it had a definite Manual Samuel vibe. I enjoyed this a lot and dug the approach. Great job.

I love the concept and execution here! It seems like we went for a very similar approach to the theme and went with interconnected needs that you have to keep fulfilled. Your approach to it was way more dynamic, though and I love that. You can technically set your own difficulty level to an extent, but there's a motivator to drive you to try and aim for a better result. Love the how to play tutorial as well. Simple, to the point and explains every aspect of the game clearly. Overall lovely project ;) Amazing job!

I love the intro and tutorial. The game really gets you pumping if you want to reach first place. The ONLY thing I would want added is a little running man sprite above the speed indicator, and honestly that's just luxury nothing necessary. Fantastic job!

That's a great idea! Noted for the post-jam edition :) Thanks for the feedback!

Reminds me of Manuel Samuel a bit, with fewer graphics. I think the only thing that would make it better, without going way beyond scope, would be button-controls.

Thank you for your feedback! Keyboard controls would be pretty cool. Thanks for the feedback!

This is a really fun game! The idea is very unique and executed so well, and the tutorial was very helpful. I had a blast with this! Great job!

Thank you! Glad you enjoyed it!

This was fun. So far the most innovative take on the theme For some reason the heart is hard to click on when it gets very tiny. My runner died a couple of times of tiny heart syndrome.

I ended up in fourth place.

Glad you enjoyed it! The heart takes a bit of skill to keep up, haha. Thank you for your feedback!

I like the concept of the game as well as the gameplay. The tutorial was very helpful as well.

I would recommend that you play around with sound a bit more to balance it and make it a bit less sharp. The text sounds as well as the soundtrack generates this sharp beat which is irritating if you're wearing headphones (like I was).

It would also be nice if there was some sort of timer or bar which lets the player know how far they have reached in the marathon.

Overall, I'd say its a pretty solid game. Nice work!

Thank you for your feedback! I have had some people complain about the sound, oops. I'll have to fix it after the rating period is over.

Also, there is a bar which tells you how far you have reached in the marathon.... (horizontal bar in the bottom right)

Oh, my bad. I thought it was the running speed. Maybe consider making that bar bigger and moving it to the top or bottom of the screen so that its easier understand.

Noted! Thank you for your feedback.

This is pretty well put together! Interesting concept, fun quips, and a cohesive style is already good enough, but the mechanics are balanced together quite well. There are just enough tasks to be engaging, and tying a few of the tasks to each other (breathing/sweating/drinking) was a clever way to make it not feel jumbled. Well done!

(my favorite line when getting 5th place was "you got slightly below average, which is what we strive for in this company!")

Submitted
Workin for the Weekend
LikeReply
BurningApparatusDeveloper1 year ago(+1)

Yeah, I wanted to make sure that everything served a purpose, and didn't exist just as another thing to worry about. Glad you enjoyed it!

Also it runs well in wine so as a Linux user this makes me happy. I can’t play half the games from the jam :( (well, I could if I really wanted to put effort into it lol)