Play as the compulsive gambler, Thomas, and follow his story as he tries to win money on questionable casino games.
Submitted by Vedal (@Vedal987) — 3 hours, 30 minutes before the deadline
Add to collection 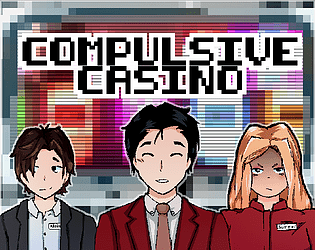 What a great game/games!  I don't understand why you don't have more ratings.  Amazing work!  Hope you''ll check out our game as well!  https://itch.io/jam/cgj/rate/476728

Submitted
The Race: A Track of Lies!
LikeReply
ManusSubmitted1 year ago(+1)

What a game :P It must have been a lot of work.

There were some minor things that could be fixed like transitions between music, a bit more detail on minigames, walk speed, but game was really great. I love that you juiced every minigame.

Great job :) I wish I could beat that bulletstorm game so that I could get further in plot, but I couldn't ;/

An interesting entry, I didn't like the dialogue bu the minigames were good. Good Job!!

Would really appreciate it if you could play and rate my game, https://sam-vart.itch.io/foxy

The visual and the music are amazing, the minigames are challenging and fun, nice entry!

FIRST THING: too many dialogs. I mean, it's a story based game so yes, but it could have been quicker and more interactive maybe, I don't like spending my first 5 minutes reading texts. The game is having a nice storyline, with some contextual music and sounds that are ok: some of them (e.g. the race's one) aren't looping seamlessly. You should also have added sounds when using the Z key to interact, player feedback is important for any action.

I like the idea of implementing several mini games in a game, but sometimes they're having some little bad points (e.g. the jump of the platformer game, you can stay stuck to the sides of the platforms). It's hard but to me, you need to make sure every single added game is having the same quality level as the rest. Overall, those mini games are pretty simple and I think they could have been better. To me, it was a very ambitious project for a 7 days game jam, leading to some missing polishing and approximate controls. The bullet hell and the air fighter ones are the worst, I didn't enjoy playing them: way too unbalanced.

Art is cool, consistent, even if I'm not always fond of the UI elements of the arcade games. It's still great, especially the main scene of the game (the casino).

I can see that there is a lot of work done here.  Oh and also, game mechanics aren't lying, you're just cheating at games to win them. I'm not sure about the way the theme has been handled.

I still had fun trying the game, good luck for the voting!

TLDR: The game has a nice writing, art and sound, but the game design turns me down so much, it isn't bad, but lacks so much polishing, could not finished the game because it becomes so frustrating.

The writing is nice, got me laughing many times, characters could be less generic, don't know how to express it, but it is ok, i know that it takes a very long time to create deep characters.

Game design is frustrating, slots and bullet hell are ok and works fine, caution with screen shake on bullet hell, it made me lose some lives, fighter planes could work if it wasn't for that MASSIVE last wave of enemies, super tiny shoots and the slow motion cheat slowing down the player too, dog walking simulator lacks polishing, jumps height are different sometimes, and you can get stuck on the wall very easily, driving sim was working fine, but wasn't fun at all, it was dull.

The cheat combinations were hard or just unresponsive to do on some games like bullet hell, i lost so many lives trying to do it and getting myself in the way of bullets.

The songs are well made and doesn't gets repetitive, well done :)

Some sound effects stacks one on another and ends up clipping and creating very loud noises.

The art is pretty nice, the gloom effect on the casino looks amazing, full of little details on the background, and the protagonist walk animation is well made, could walk a little faster to not create that ice walking effect.

Does it fit the CGJ theme? hm... haven't played it to the end, but from what i played i think it is that you can't win, right? It is an OK use of the theme, but be aware that the lack of polishing could confuse the player thinking that he loses because of glitches and unbalanced gameplay and not because it is obviously made to be impossible to win, at least for me, guess i am a little slow to notice these things, lol.

Anyway, take my feedback as constructive, the game has good things like art, sound and writing, although the game design is lacking for me. You guys did an amazing job for a jam game.

Loved the music and the variety of games. Overall it was very entertaining. Please check out our game too! It'd mean a lot

Thanks! I'm glad you were entertained, and I'll definitely check your game out.

found myself playing too much of this, story was pretty decent, i think there was too much dialogue, the games were i'm assuming purposely too hard so you have sneaky guy tell you cheats for that reason, overall good game :)

Thank you! I appreciate the feedback and I did try to make the games a bit too hard :)

I just did not get anything about the theme sorry

Submitted
This is just a simple and normal game.
LikeReply
VedalDeveloper1 year ago

You can't win the casino games through normal methods. They are a lie.