Bobu is a lieView game page

A decent platformer (?)
Submitted by Wolfy Games (@Gers2017) — 2 seconds before the deadline
Add to collection 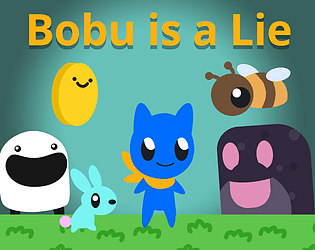 Bobu is a lie's itch.io page

Cool game. I like the graphics. Mechanics are nicely done but dying because you touched side of the spikes is just unfair... It's sad that dialogues aren't working, it seems to have some interesting story to tell.

Please give my game a shot and rate it if possible ;)

Cool mechanics, Music was quite loud. I really wanted to try and collect the coins.

A really fun and cute platformer! I like where you going with that artstyle! I definitely will want to see more of your games with this artstyle! Rated ! <3

Thank you JazeGames!!! That means alot for me I'm glad that you like the game. For some reason I like to make cute art.

Sweet color combinations and overall theme! And i thouht we were running short on time.. If nothing else this game definitely wins the "last minute" award!! Great job. What a rush that must have been.

Thanks I put my heart in the game and I forgot the time...

As promissed, here is my feedback.

Let's start with the good stuff. I really love your graphics they are awesome. Your game was fun to play and I really enjoyed it. You spend some time with the level design and really thought them through. I really liked how you gain the abilities over time and learn how to use them. Similar to our game, which you should enjoy ;)

Now to some not so good parts and how to improve them:

I hope this feedback helps you.

Would love if you give our game a try. I really think you will love it due being very similar ;) I really enjoyed your game.

Thank you! This feedback it's great

About the dialogues. Yes they have a bug and it's because the game was made in a inestable version of Unity (Because in the editor works fine) and it's the main reason to fit the theme. So good bye theme points...
About the backgrounds to be honest I just wanted to make vertical levels and I didn't have many time so I make a flat background.
The arrows are lying. You know the game is a liar.
I take out the double jump becasue a want to make the player able to choose levels. But the time kills this too.
and I really sorry about the end! The time! Just 2 secods was left! Sorry!

(edited: I forgot to tell you that I enjoyed your game °<°)

Damn you really live the risky life. Submitted 2 seconds before the deadline :D

I will play your game today.

This game was honestly really fun, definitely the best one out of the handful I played so far. Really good use of classic platformer mechanics. The art is fantastic. The music is great too, did you really make all that in this week? I will say the most frustrating part was forgetting I could dash while trying to pass the first set of rabbits. Once I figured that out, it wasn't too bad. The signs didn't work for me at all, pressing space did nothing, which is a shame because I'd love to see what they said. The moving platformers were a bit glitchy with sticking you to them they way they did. Overall tons of fun.

I found if one stands on the right of a sign, just touching it, space (usually) works to show the sign - some are really funny to read and make up part of the charm of the game... guessing just a collision issue.

Thanks! I really appreciate your comment!
There's a bug with the dialogue boxes because in the editor works pretty well, and with the moving platforms I forgot to add a line of code. My bad. Gotta fix fast.

Oh I died so many, so many times!
Good fun tho!
Really cute graphics...!
I am going to try an win this - challenge accepted! I want to see those later levels :D

Not going too hard with the theme but giving a cutesy vibe that I love. Great song and nice movement flow