The Legend of PencilView game page

Made for Brackeys Game Jam 2020.2
Submitted by Luife (@Luife_Games) — 5 hours, 6 minutes before the deadline
Add to collection 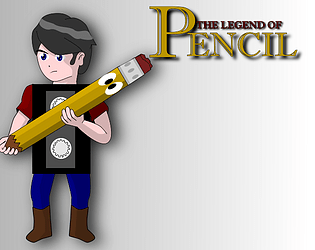 The Legend of Pencil's itch.io page

In what way does your game fit the theme?
History and Mechanics

Did you write most of the code yourself and made all the assets from scratch?
Myself

i loved this game reminded me of those old rpgs also the dialogue is great also also rate my game pls https://itch.io/jam/brackeys-4/rate/722051 if you haven't already

It really feels like an old RPG from GameBoy or NES era. I especially like the art style, the animations are good. Good job!

Really felt like an old Zelda game with the dungeon layouts and the power-up gaining. The enemies having a in-game health visual (the unwound tape) was clever. The movement was a bit slow for my liking so I found myself rolling everywhere (like Zelda) and the text SFX was grating. I also wish the pencil would interrupt the game less.

Reminded me of Zelda Games. Had fun playing it.

Its a nice game man. i found the title funny. but then the game has a darker look to it. But at the end is pretty fun. feels like kind of Pokemon. hope you will give me your feedback on my game ;)

Submitted
Back In Time
LikeReply
GuldorGamesSubmitted1 year ago

its nice that it really feels and looks like an old gameboy game! and how did you make the browser go fullscreen! no idea you could do that on itch :O I really like the look of the game in general! Not all art pieces are clear what they are but thats oke. I do have to say that the movement feels a bit slow and the roll a bit to short for my taste. Als the “C’ on the ground was hard to see just like pressing the “z” later it was not super clear. I would say show some text on screen at the first(few) times you need to press a new button so player don’t forget what it was.

Personally i’m also not a huge fan of having to read to much, but it works really well for the artstyle so this time its oke. I have to say i really enjoyed playing it! it was fun and i was wondering what else there was to come so very nice on that part! the pencil (and using it to rewind in the old days) was a nice idea and fun weapon and character at the same time cool idea! But the further i got the more key’s i had to remember so maybe have it on screen what buttons you have with symbols of what they do or something like that?

The puzzle was a nice idea but maybe a bit hard for a first puzzle, took me a bit to long to get it right :P Overal a nice little game!

interesting take on the theme I liked what u did , the controls the art were on point the SFX was little to loud at some points .

This is a very good game. But after the puzzle, I did not know what to do next. Overall, great game!

I really like this game! The story and graphics are very well made. Sadly the music that is playing backwards is a bit annoying to listen to but all in all, great game jam entry (rated) 🐘🐘🐘

I love the art, game play, mechanics, and relation to theme, it really is an amazing game and I can't believe it only took a week!

I liked how the game not only has a story, but a whole world it takes place in that has its own lore. I can see in the beginning that you’ve been playing a bit of Undertale from how similar the intro looks.

The sound effect for the text scrolling was quite unique, and it seems very fitting. Perhaps each character could get their own text-scrolling sound effect that matches their personality.

The puzzles that the game has are well executed. You treat the player like if they were smart and allow them to figure out all the aspects of the puzzles themselves. It’s also cool that the puzzles teach the player how to use new mechanics correctly, that is an example of some good game design. While the 4 tile puzzle was well designed, the tiles were kind of small which lead to many times where two tiles would be pushed by accident. Making the tiles larger should fix this problem so that the movement of the player is much more loose for the player to move up to the tile they want to push instead of moving a slight amount of pixels just to be able to push one single tile.

Some of the sound effects, such as the boulders collapsing, hurt my ears since I was wearing headphones. I was expecting the volume of the sounds to be only slightly louder than the background music, but it ended up being much louder than expected. I had to turn the volume down all the way which made it hard to hear the music.

I kind of wish the pencil wouldn’t get stuck in the wall behind me as I threw it. I don’t know anything about the engine you’re using, but I’m assuming this could be fixed by spawning the projectile right in front of the character instead of starting behind.

The rolling ability seems kind of short for an ability that’s meant to be used for dodging, and seems to be easily spammable. If the dodging were to occur for a longer animation time, as well as to have a slight delay before it can be used again, then it would feel much more natural and useful for combat.

Some of the pixel ratios don’t seem to match with one another with some pixels being larger/smaller than others. The pixel art should always be at one consistent ratio to make everything feel like it matches with one another. Having different ratios makes the art unpleasant to look at and its style becomes completely out of place, and all over the place.

Overall, while this game does have some rough edges that need to be smoothed out, I had fun exploring the levels of this game and it’s mechanics; as well as the story it has going for it.

This is the best review of my game, thanks.👍👍

Submitted
You will never catch me!
LikeReply
MitaclaSubmitted1 year ago(+1)

Someone as being playing Legend of Zelga and Undertale kinda of games :)
Nice intro and art design, and I like the story (want to know the continuation :) ).
For me, the audio was not the best choice. The dialogue sound is kinda annoying.
Liked the reference for the puzzle, but maybe it is a little to difficult for such an earlier phase (although I was able to do it :) ).

Good zelda-like game. The only problem I've found was in the dialogue sound, it was very loud and not enjoyable, nothing that can't be solved. I liked the atmosphere of the game, overall great job.

obviously it's based of the zelda series, but this doesn't seem like a knockoff zelda, this one hase some appeal, i would trully recommend expanding this one into a fully fledged game, I see potential.

The game is polished, I didn't find any bugs so that's a plus for me, great great job luife, see you arround on twitter haha :)

Very nice work! It was interesting and long enough to keep me engaged without being tedious or drawn out.

The game was super fun. I really liked it. The pixel art was very good and the audio was top quality. Overall, a really great game.

Also could you please rate my game too?