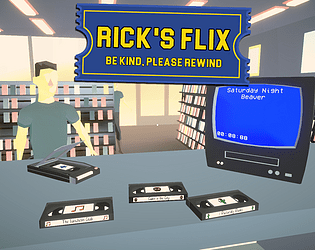 Ranked from 63 ratings. Score is adjusted from raw score by the median number of ratings per game in the jam.

In what way does your game fit the theme?
Rewind VHS's to satisfy customer needs.
Also, rewinding back to the good times of BlockBuster

Did you write most of the code yourself and made all the assets from scratch?
Everything is made by the team, exception being the animations and packages such as DoozyUI, URP, FlatKit, JMO, and TextMeshPro

Very well done and polished game. Great design, graphics and theme! Very creative with the movie names too haha! Check out my submission when you have a chance. Thanks!

really charming, I forgot how I missed this type of game xP

Really great game and very polished as well! The gameplay loop is very satisfying and the game is charming overall. Amazing job!

I had a bug where I couldn't interact with anything (objects didn't light up).

This was a joy to play! I did find myself accidentally reinserting tapes when I had already rewound them. Presentation was fantastic, and the gameplay loop was engaging.

Well done to the team!

Amazing. Super simple concept and kind of addicting to play... My only gripe is picking up the VHS, it was a little finicky getting the right VHS, and sometimes they would be placed inside each other. But otherwise is was a solid little game.

I left the clients angry kkkkk.

Really nice game, I like the idea and the visuals also feel really nice. The detail of the candy is great!

The game is kind of laggy which makes it less fun than what it could be, maybe a quality option for the player to choose would be nice. But apart from that, good entry, keep it up!

Would be awesome if you could check out my game too and leave a rating, thanks :)

Submitted
Manolo
LikeReply
Rainbow in the DarkSubmitted1 year ago(+1)

Things I liked, honestly this whole game was a lot more fun than I expected it to be. I loved the fast pace management of all the tapes and I got to say after awhile I even found myself talking back to the customers as if they were actually there XD. The candies where also nicely done as they allow enough brevity for the player to hold out till they find a tape someone actually wants.  I can tell you also had a lot of fun with the naming conventions behind a lot of the movies, very nice touch!

Things I dislike, normally this list would be longer but you actually catch a lot of that in your disclaimer so well done on that XD. The only thing i'll say then is that I feel like your game would definitely benefit from some sort of career mode or story thing to help interest the player along. I was actually fairly motivated to see each next day, out of the simple challenge of having to manage extra genres, but having some sort of story or characters to follow along with would elevate this from simple game jam to full on GAME. (no jam included)

Overall this is probably the game iv most enjoyed playing in this jam so far! Hope you keep working on it so I can see what a full game version will look like!

First, A big THANK YOU to everyone that has played and rated our game, it really means a lot to us! For anyone coming in blind (or is frustrated with the game) here's what you should know:

- Between levels you may no longer be able to select anything. Just restart the game to fix this, your progress is saved

- The Downloaded game will not be less buggy, but it will run smoother than the Web version

- There is no tutorial, check the How to Play page and try your best on the first level

- Customers can (and often do) ask for movies that you don't have. You can mitigate this by giving them candy to calm them until you get the required movie, or you can just let them get angry and allow a different customer to fill their place

There are other bugs too, but these seem to be the most common. Hope this helps!

Great approach to the theme. I couldnt play that much cause my pc has low specs and was laggy.  Maybe a low-med-high quality setting.

I really like this idea, and I'm a big fan of mindless mini experience game, but current state of the game while still fun, is very unplayable.

I restarted 6 times during my playtime:

- First restart: The tutorial wasn't clear on what I was doing so I messed up both tries, have to exit the game entirely because of the save to retry day 1

- Second restart: Day 2 starts and I couldn't click on anything at all, so I had to quit again

- Third restart: Accidentally press M1 and the tape I'm holding just drops to the ground, which because of camera lock I have no way of reaching, pissed off and restarted

- Fourth restart: Middle of day 2, I realized that customers can ask for tapes that you literally doesn't have, so that automatically makes you lose customers

- Fifth restart: I wanted to wipe my save to restart the game flesh, but after messing around a bit I realize I can't delete the saves in game, nor do I know where even are they

- Sixth restart: I quit to the menu during day 3 because I messed up and wanted to restart the level, going back into it the level is only half reset, the customers is still asking for tapes, and when I give a customer a tape of science she's asking for, she got pissed off because apparently she was asking for love movies (I'm assuming this is a bug caused by the half reset)

Some other notes: Path-finding is wonky, customers can get stuck on other customers that are asking for tapes

I really wanted to like the game, but by god it is buggy

Note: After writing this review, I figured out where the save files are

Submitted
The War We Lost
LikeReply
Ninja MonkeySubmitted1 year ago

Edit: I quit and restart the game and luckily my game was saved and  I was able to continue and the controls were working again. Maybe you should adjust the dificulty. On day 3 the clientes asked for movies I don't have,  and I think is a little unfair.

Ya, unfortunately we are aware of the no click bug and have worked to find a fix. We are still unsure as to the cause, which is why we implemented the save feature to allow you to go back at any time!
The no movie issue is a balancing issue we've also had trouble with.We are glad you enjoyed yourself nonetheless however!

Click games aren't really my cup of tea, but I did enjoy playing this. Unfortunately, I lost all ability to select items on two different occasions, one after a terrible first day at work (restart), and second after starting my third shift. Windows version. So we'll have to leave it there. Thanks for the game!

Yeah, I'm aware of the bug, fortunately it only happens between days and you can just re-load the game and resume where you left off. But it is pretty annoying. Thanks for playing!

I believe the difficulty curve could be a bit slower, so that it is not so hard!

We had the exact same idea and almost shared the same title! lol

I also made jokes with known movies names. I have to admit you made a much better job than I did and your game is more fun!

It took a while for me to catch on to the flow of the game but once I got it down it was pretty great!

so, idk if this is just me, but I found the game to be too difficult.  other than that it's a great game.

The movie titles were funny, i also suggest to add a tutorial.

I hope you were able to find the "How to Play" section! If so, Please let me know how I can improve this! I always try to make tutorials easy to understand!

Ah, I see! I'll keep that in mind for the future. I'm glad you still enjoyed it! and thanks for the feedback :D