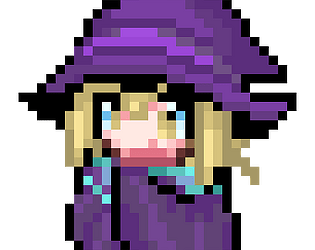 In what way does your game fit the theme?
The player's gun uses time as ammo and when time runs out, the bullets rewind back to their original position.

Did you write most of the code yourself and made all the assets from scratch?
All code and development was done myself. Some assets were created by me and the rest were public use from opengameart.org and soundimage.com

Really like the game!  The rewind mechanic was really cool and the audio was great! Nice one!

Cool game, nice controls and fun boss fight. I was pretty upset though that both me and the boss died at the same time, but i feel like that still counts :P

One thing i would suggest is to maybe make some areas a bit brighter. I found that a lot sections were so dark that I was effectively blindly shooting to hope i didn't die.

Could you please play and rate my game too?

A great game! It has many variety of enemies and interesting mechanics, good job!.

I really liked your game! I accidentally went straight up to the final boss so that was difficult LOL.. I think it would've been nice if the bosses had health bars. Also I wasn't sure what the eyeballs were used for? But I had a lot of fun playing and got mad whenever I died, so that's a win in my book. Great job :D!

Submitted
Run It Back
LikeReply
FlygalaxiesSubmitted242 days ago

Wow! How does your game only 18 rates? this game is great! A perfect dungeon crawler, good sound, shaders and graphics.

Submitted
Ghosts of Futures Past
LikeReply
RedstoneEngineSubmitted243 days ago

Cool 2d shooter game! I liked the range of enemies and the differing difficulties. Some of my suggestions would be to have the enemies be able to path find, have the bullets phase through enemies, have the rewound bullets do double damage, and maybe create some intractable rooms. Great game so far considering a week!

I like to play in the insane mode.. cool game.. I had a good time killing monsters.

My game is a casual game if you wanna rate is https://misterm.itch.io/mixtape-match , Thanks

Very fun! I tried shooting at the wall and luring the monster to the rewinded bullets but I don't know if there's an advantage to doing so instead of just shooting it (which is also one of the issues my game has). Overall this is a very fun game with a lot of potential! Keep it up

Good game, looks great and plays great. Got enough levels and enemies to have fun with!

I loved how the rewind changed the bullet-hell concept, and it is the first game in the jam that i have played that has a fast gameplay.

The only thing a little bit strange for me was the darkness, sometimes it was way too difficult to see the enemies in the way. But it's not a big deal (maybe its just my monitor), really liked the game anyway!

The art looks great. You have a lot of enemies and the game is pretty big. Cool game

Wow I really admire your work, it is the first time I play a bullet hell and I love it. I am really very impressed with your work, I would like to see this game become something much bigger, since its potential is gigantic

I really appreciate your game. One of the best I've had in this jam

Really fun game! I love the wide variety of enemies in the game. Great job!

I'm a fan of twin stick shooters and bullet hell games, so I had fun playing this one! I was impressed by the number of different enemy types, and the size of the game. Visually, the enemies and main character were done well, as were some details like the little cross-shaped shells you leave on the ground when you fire.

Sometimes I got a bit lost with levels that large, so a map would be handy. Also, one enemy (the black ghost/wraith that fires a 360-degree burst) was particularly hard to see. I was trying to find out if I could rewind bullets into enemies (or myself) but it wasn't clear if that was working or not. Some feedback would be helpful there, otherwise it felt a bit like rewind was just reload with a cool visual effect.

I had fun playing, thank you!

Damn, nice game! Love the complexity & detail of it, made in 1 week it's pretty insane :D

The gameplay feels dynamic & the art fits it pretty well. Had fun playing it :)

I like the game, I just have a few problems:

If you get behind the blocks, the enemies don't go around.
In the menu the character hides the controls and in the credits, I only see half of the credit text. But if you fix that, the game is good :)

It would be cool if you also rate my game^^
https://justinklasnic.itch.io/dark-time

It was nice, the lighting was rly cool, tho the way the rewind was implemented felt a bit off

The most badass witch I have ecer seen