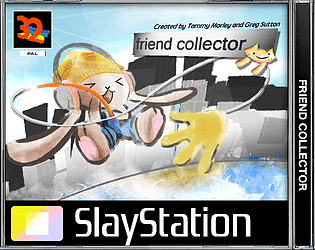 Amaaaaazing graphics and 90's feel! Sadly my controller didnt work with this one T_T It was pretty tough to control with K&M but I did manage to reach the vehicle/escape sequence.
Exquisite vibes, Woah, Very Good, Nom Nom Nom Nom

Ty!! and woww props to you tho for powering through. Can you let us know what controller you might've used? Always good to ensure we get as many devices working ! Thanks again :)

It’s incredible to imagine two people got all this done, especially with all the music, in just two weeks. I handled just music on this jam and barely managed to get a soundtrack of two tracks and two fanfares done, so I can’t help but praise your work ethic.

The balance meter is an interesting idea - it comes across to me that you intended it to be a fair, forgiving way of handling failure in rhythm games, but I’ve seen other people perceiving it as an overwhelming additional element to simultaneously juggle alongside the rhythm gameplay.

Unlike some other games I’ve seen this jam, I am a little skeptical about whether this game concept could be increased in scope and scale. The concept of “keep getting good at the gameplay loop to add additional game time!” as seen with things like endless modes in puzzle games or E-102 Gamma’s gameplay in Sonic Adventure is solid in theory, but I think it’s hampered in this case by the fact that the songs are of fixed length - no amount of increased skill will make them take up less of your finite time, even if the reward money compensates for that. In my personal experience, it makes me feel like how much time I have left is out of my control, regardless of the ability to buy extra time.

I’m definitely glad to see this game exists in the state it’s in, though. It’s an excellent exploration of a bunch of ideas that feels really authentically PS1 in spirit. I admire the soundtrack’s bolder approach to messing with sound compared to what I’m normally used to. I’d love to see a download of it!

Thank you! We had a lot of fun developing this, I made all the music during commutes whilst juggling the art assets at night. I really enjoyed making the shorter, bouncier tracks as I'm so used to working with incredibly dense music artistically w my band and solo music.

We really appreciate the feedback regarding the gameplay loop! We originally wanted to make the goal of collecting every type of friend possible but couldn't balance it all during the jam period, so instead focus was put on collecting as many as possible with a simple timer upgrade to increase the odds. However, we want the game to really reward the player for performing well! and so for the future we have plans in the works to improve this.

Also have plans to ease players/tutorialise a bit more for those less accustomed to rhythm games and some other QoL things. We plan to address much of these things in a future update :)

Also I'll definitely post the OST somewhere at some point!

That sounds great! I know I might have sounded a bit more critical than I actually meant in my first comment, but I’m genuinely looking forward to the update and the soundtrack release.

Great graphics and music! The game is quite hardcore, which is why I couldn't take my friends home. However, I would like to change the control of the two right arrows to the A, B buttons on the gamepad.

Thanks! We are planning to add re-bindable controls in a future patch so hope that will help :)

The level of polish in this is insane. It feels really authentic to the PS1 while also feeling very unique but nostalgic for some reason. This game checks all the right boxes and is definitely one of the strongest contenders in this jam. The only criticisms I would have is that the rhythm sections could be a lot easier when they first start (or have a difficulty option), and some mechanics need to be better explained. But hey, I felt just like I did as a kid when I played the PlayStation and wasn't really sure what I was doing until I got a grasp of it after a while, so I think for the purpose of this jam this even gives you extra points. Great work!

Thank you so much! Really love the point you made about how the difficulty fits right into the era, we feel like the overall challenge of the game is one that takes practice but becomes very enjoyable and satisfying once you get the hang of! Just like a lot of games I grew up playing as well. Despite this we do want to make it a little bit more approachable/apply some more quality of life features for players so we're taking that into account for the 1.1 patch after the jam :)

Loved literally every second of this. The music, mechanics, and aesthetic of this game are obscenely good. The rhythm game parts are abnormally well-charted and responsive - not only for game jam games but for indie rhythm games in general.

I'd kill for a full-fledged release. Not even more features, just more songs and friends to catch.

Aw thank you so much this is a HUGE compliment!! :D We really want to add more content to the game just as you've described as well hehe

looks like it was pulled straight off the disc. loved the animations and overall look of the characters and icons. fantastic work!

WOW that's crazy polished for a game jam. Seriously love the concept and gameplay, but I thought the rhythm parts were wayy too hard. Maybe I just suck at rhythm games (I was only able to keep up when my laptop went into battery saving mode and the game started lagging :P), but I think having some easier songs (particularly at the beginning) would make it more friendly to noobs like me. Really great work though :)

Thanks for the feedback! :) We think the approachability/difficulty of the gameplay is the main thing we want to improve on for people less experienced in rhythm games and also to better tutorialise the unique gameplay system a bit to players in-game. We've had some ideas on tackling it for a future patch after the jam! Thanks for playing! :D

Awesome, glad to hear you guys have future plans for it. This one has so much potential, and it's already so good!

It took me a while to understand it (mainly because I didn't read the controls at first), but the concept and gameplay are amazingggg, I loved it

Easily one of the best jam games i've ever played. The amount of rich and deep gameplay put into a 20 minute loop is incredible.

The game is endlessly replayable, with a learning curve that got me constantly doing new runs!

The art is so cool and the music is so good!!! Tammy is out of her mind to create that many songs but she did it, and they're all bops.

The game is also spectacularly programmed, with so many gameplay styles and no gamebreaking bugs, it's clear that Greg is just a wizard disguising as a programmer.

As a lifelong Parappa fan, i'm so glad the team have managed to nail the quirky PSX rhythm game as well as they have, I will not stop till I get all of the friends!!!!!!!

This game is awesome !! This is just the perfect brand of 90s silliness ! I can't believe I lost all my friends at the end though !

thanks glad u had fun! and aw no! the fuzz can't keep getting away with this smh 😤

I suck at rhythm games but I still enjoyed this a lot. You nailed the 90s look, great job

That was such a fun playthrough! very unique :)

This is amazing! ^^ theres something about not knowing where a game is going, or why it works so well that's very 90s, when games could be ANYTHING random and still become extremely popular. This nails that feel 1000% very well made both of you :)

Thanks! and YES Exactly this! We were inspired by the diversity of wonderful games in the PS1 era and how much effort was put into creating games of incredible niche.

Escape the fuzz gave me stress like you wouldn't believe. 10/10

Submitted
Daughters of the Dancing Flame
LikeReply
NOIROVASubmitted96 days ago(+1)

I'll admit that I spent an unhealthy amount of time playing this game.

The graphics and 90s feel was rather endearing; Oddly this game felt nostalgic despite not actually being made in the 90s.

The music and SFX was likely the main reason why I continued playing the game. The minigame was difficult at first but really fun when you got the hang of it. As someone who really likes the rhythm genre, you both really hit the nail on the head I'd personally say.

The only part I was unable to really get the hang of was trying to catch the "friends" that were really fast. It was pretty difficult managing the cursor while trying to fill the meter up (I was using a mouse if that means anything).

But regardless, amazing job! So far this is my favourite game of the jam. :)

When the "Fuzz" cutscene came on,  I found out that I was able to pause / access the shop. I bought more time to see what would happen and then un-paused. This resulted in the screen going black and I was unable to proceed to the "Truck" minigame. To also note, I was still able to hear the button sounds despite the screen being black.

Submitted
Daughters of the Dancing Flame
LikeReply
TammyDeveloper95 days ago

That's super cool to hear!! I'm glad you enjoy the music I tried to strike a good balance between being enjoyable but replayable, its tough! but overall seems like its worked out :)

Also that bug is so funny because I had a friend have that EXACT same incident, it's so very specific too we would have never considered it in testing lol, but we're going to try to address it in a patch after the jam rating period! Thanks for the feedback. 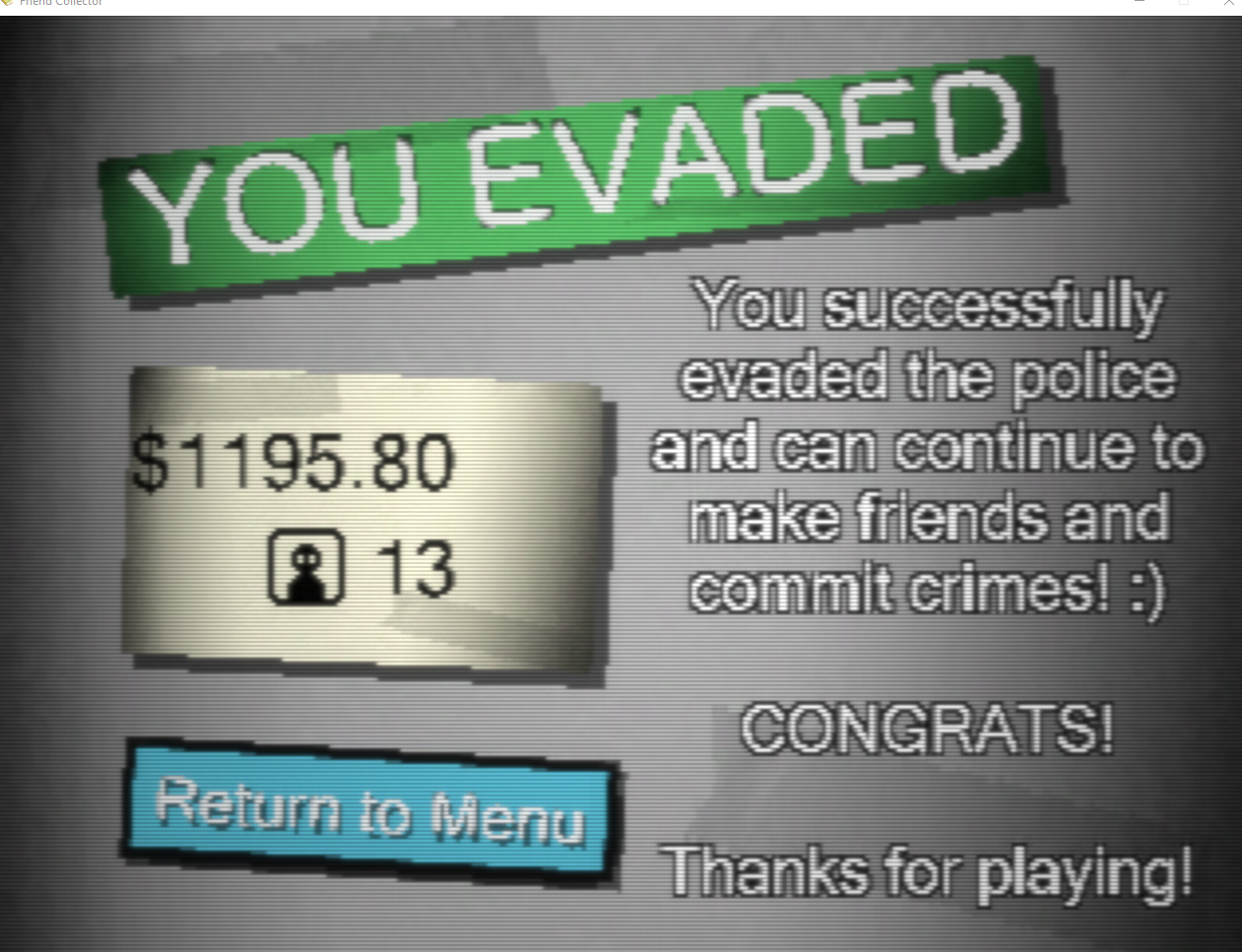 That was awesome! The graphics, music, and overall presentation are top notch, by far the best I’ve seen so far.

The gameplay was really hectic and seemed difficult at first, but after a few rounds it started to make more sense.

I think you should clarify that the balance is meter only moves significantly when you miss notes. I noticed that if I just focused on hitting notes, I barely needed to move the balance meter.

I couldn’t figure out if the size of the friend shadow had any effect on the resulting friend type. I played for a while and almost maxed out the book, but it took me a long time to find any food or houses.

Ah thank you! Your feedback is immensely helpful we're hoping to roll out a patch after the jam that addresses bugs and improvements to UX :)

Wow! What an interesting idea, and great execution as well. I love rhythm games and fishing games, so this was a fascinating combination to see!

Submitted
Death In The City
LikeReply
TammyDeveloper95 days ago(+1)

Thanks! We're relieved to see that people are enjoying the execution of the idea aha