Very cool simulation game! For aesthetics it would look cool if the people kept moving even if they were locked in. That might also increase the number of infected if they're all cooped up and bumping in to eachother, whereas now they just stood still.

Cool concept! I like the story and the gameplay is interesting, but the Firewalls seem way too strong, especially given that you can prevent viruses from spawning. Reminds me a bit of Into the Breach in a way, which is a good thing.

Great game! I think the AI is very clever and performs a little back-and-forth dance with you, and I like that if you chase one of them another takes advantage and slips past you. What's also interesting is that you can point the flashlight away from someone to lure them closer.

Great fun! Love the concept and the humor of it. At some point a lot of the villagers started to follow the ghost buster and I wasn't sure how to deal with that. Also, why were there floating crosses at the edges of the map?

Nice game! I think it looks great and it's cool seeing what the director is going to do next. The controls were not immediately intuitive; despite reading the description I started clicking the browns squares right away which didn't work. I think what would lift this concept to the next level is if you actually had to solve a minesweeper level while you played it, so where you could only build towers on randomly placed "bombs". But maybe that would make the TD part too difficult? Anyway, it's a cool concept and nicely executed.

Great game! Love to see such an in depth tutorial. It was a bit hard to differentiate the pits from just regular walls, maybe a slightly darker shade of black for the pits could have helped.

Fun little shooter! I love that you've used the theme twice, by trying to isolate the green buddy but also by having a cage as the secondary fire. I also think it's very clever that the enemies shoot cages instead of bullets, so there's no boring health bar mechanic. On the AI front, the pathing could be improved because I did see some enemies get stuck behind a wall.  But overall a lovely game!

Love this concept! I ran out of bullets which means I was probably doing too much shooting and not enough being a friend, haha. I thought the controls work really well. The menu seems to stop working after I died, so I had to reload.

Fun little game! I like how hectic it gets. It took me a bit to realize that the green ones can spawn inside the white spawn zone so you have to drag them out manually. And I wish that when you lose, the explosions start with the ships that caused the failure. Great interpretation of the theme.

Thanks! Yeah, I wanted to create a startling, dissonant ending, by contrasting the sad final statement with the cheesy sound effect and fireworks from Windows XP Solitaire. But if it felt unintentional, then I pushed it either too far or not far enough.

Thank you so much, that's definitely what I was going for. And I'm glad the abrupt ending landed.

Yeah good point. I assumed most people that want the menu narration also use keyboard or controller, so that's what I tested with. But that is definitely a good idea for an extra setting: "disable mouse during narration" or something like that.

Sure: it's in the level called "First challenge". Pressing the right arrow key causes more collision circles to appear, but the rotater won't budge. And unfortunately it happens consistently for me, so R doesn't help. 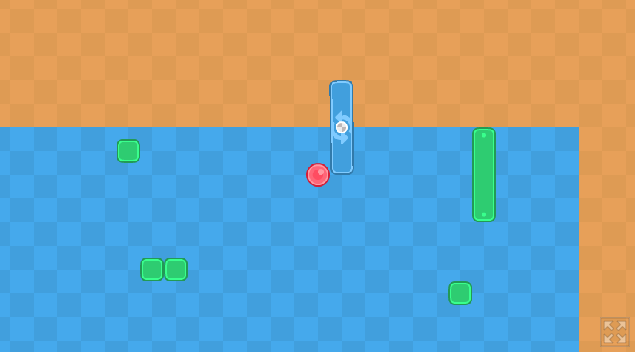 Cool game! The game feels satisfying to play. Unfortunately I got stuck on a turner as well. (Also, based on titles alone it seems you made my game's sequel, haha.)

Great game! Cool that it can be controlled with keyboard or just the cursor position / an eye tracker. The jump sound effect got a little repetitive, but I liked the voice acting, especially that it reminds you to build a fire.

I got the message "whatever you're doing, stop immediately" a lot, but I really had no idea what I did wrong. When I finished the tutorial, I got to an empty path where nothing happened and my buttons didn't do anything. But on reload, I did manage to get to the main game. It's a shame the tutorial didn't explain any of the icons. (Sword and shield make sense, but what is the star? The three daggers?) I like the spooky vibe though!

Hi! This game was finished and released two years ago, and has received a number of patches post-launch. There are Steam mods that allow destroying mountains, if you're into that.

Wow I feel called out by Nanako. And my heart broke when I mispoke in front of Oscupp. Cute game! I think it's a really interesting use of dice. I was thinking it would be nice if you got more options as you got more dice, but I guess that would take away from the wacky randomness of it. So yeah, no notes, top marks!

Very cute! It's a shame the "rolling" just gets in the way, it would be easier to just press 1 through 6. (I guess I don't know if it goes up to D12 or D20, but at that point the rolling seems even more laborious.)

Thanks for the feedback! I didn't play the game full screen during the jam, and realized after submitting that it wouldn't stretch. So yeah that's something to improve. The art is not mine, but I'm glad it looks cohesive.

I agree that accessibility is important! However I will point out that nothing in the game is identified solely by color: the dice have colored outlines but are mainly identified by the number of pips, and the color of the gems is determined by the room they are in, which have 1 to 6 pillars arranged to match the die faces. The game is equally (un)playable in black and white.

That said, you're clearly not the only one who didn't make the connection between the physical rooms and the die faces. The pillars were literally the first thing I put on the screen, so it never occurred to me that people wouldn't pick up on their significance. I should have asked someone to playtest it during the jam. Lesson learned for next time!

In the words of Mark Brown: "it sure is a game."

What a cute little game! I really like the art and the music is a good fit. There were some collision bugs and I think  the controls are a bit awkward. But it's great for a jam gam.

Hey, cool, we had similar ideas! I like that you get a sneak peek of the next enemy's dice, that definitely adds some strategy. I feel like the blue dice is not worth as much as the other two, idk.

Nice relaxed little worker placement game! It reminds me a little of DiceForge. A progressive goal (like collect X wisps) might be more fun than staying alive, I think. Nice aesthetics.

The sound effects really sell it! I couldn't always figure out what the random weapon modifiers did (the text didn't stay that long or only mentioned damage but then my number of projectiles increased) and at some point I couldn't recover hearts anymore. But the gameplay is definitely fun.

Cool game! It took me a while to get the hang of when to lengthen or shorten the wire, but it feels like just part of the challenge. I really like aesthetic and the felty audio.

Ah I actually just ran into the same problem. For some reason if you click outside the playing field, the arrow keys only scroll the page. But reloading and pressing "play" again seems to fix it, at least.

Huh, weird. The right side of the screen indeed basically plays itself, but you should be able to control the white gremlin on the left. There's footsteps and a pickup sound when you collect shards.

Yeah I managed to get to the screen that says "congratulations".

Fun little game! I agree that the dice rolling is a bit too punishing. Maybe it would be better if you started with 2 dice? Although that would make it less exciting to pick up another, of course. Well put together!

Very creative use of die faces. I wish there was a little more strategy though, or a reason why you wouldn't just always pick the highest number. Maybe there was but I couldn't figure it out. I would have loved something like the 3 being resorts that want to be next to the river, the 1 being a remote log cabin that wants to be next to the mountain, etcetera. Love the art!

Fun game! Feels a bit weird to play on a pool table and just destroy the pool balls instead of knocking them in, but it's interesting. I like the music, but some sound effects would have been nice.

Cool little game! Very polished, easy to understand and a lot of fun.

I love the aesthetic and the overall chill vibes of this game. Sippin' some water and growing some flowers. I couldn't tell at first wether watering the flowers did anything, but the petals and the faces were clever. Perhaps it would help if they started out slightly dehydrated so the first time you sprayed them they started smiling. Weather as the Sun's mood swings is a good fit for the theme, I think.

I thought it would be impossible to get stuck because you can always go back the way you came. But I guess a new shard spawned behind you? Something to think about after the voting ends. Thanks for the feedback!

Really fun game! I like that some of the die faces change the environment, although (except for the ice one) I wasn't sure if they also affected gameplay. Wasn't quite sure what the ghost effect did.

Very unique, there seems to be a philosophy behind the game that kinda flew over my head. The splash screens disappeared a bit too quick for me to read. And the music is too much, it almost sounds like two tracks playing at the same time. (Also why is the Fear emoji about to puke?)