Godot Wild Jam #24 - Our 2 Year! community · Created a new topic Allow submitting to both Miz Jam and this jam?
Dlean Jeans2 years ago

Rule 5. This is an exclusive jam which means that entries made to both this jam and others will be removed unless otherwise allowed by the organizers.

Miz Jam is happening at the almost the same timeframe and comes with no theme except a given art pack.

Hey, I played your game on Android after seeing this on r/GameDeals.

A few things I think you can add to improve your game:

PvZ has planting cooldowns, I think it helps balancing the game in some way, so consider that.

I'm studying game dev too and I'm curious if it's feasible to sell on itch.io. Could you kindly disclose how many copies you've sold so far (aside from 100% discounts)? Thanks.

Thanks for checking it out! Currently there's no game yet, it's just a "fragment" for now. I'm still trying to figure it out what to do with it.

I totally missed the jam and I wonder if another Demake Jam be hosted in 2019.

Thanks for the heads up! I'll map the Space key in the next update.

Here's the inreponsive input (twice mid-air and once on the platform) and slope collision bug:

This is the section I got stuck and have to rely on restarting the level in Level 3. May I ask how comes you get so many ratings compared to other entries? One jammer said because your entry has eye-catching thumbnails.

Thanks for playing this old game of mine!

I really want to add more weapons (archer, magic, catapults,...) and levels some day but never got the time to.

Okay, I got to Level 4 but got frustrated before finishing it so I dunno if there's more levels.

- The input is not fixed/responsive yet like others have said.

- The music is good though.

- The camera following the player is a bit slow.

- There's a collision bug on slopes that teleports me below the slopes when I touch the edge of the slope.

- You should add checkpoint before the enemies. It's already hard to get to that point and even harder to get through the first enemy.

If it's a clicker game then there shouldn't be a delay between clicks. Also you should be able to click on the objects to start destroying them instead of pressing Enter.

Nice feel moving around with shotgun and balloons! I hoped there were less obstacles that put me back to the checkpoint.

I think the Jump button could be mapped to W instead of Space.

You should mark your upload files as Windows-downloadable in the Edit page so people know that it's a Windows game and be able to download it from the itch app.

The game should automatically transition to the next level after the orange arrow turns black. I thought it was a bug and waited a while for nothing to happen.

The music is good though it stops after a while, you should put it in a loop. Also the pop sound was a bit too loud. But the sounds are fitting.

The texts in tutorial need a bit more contrast, I think.

I suggest doing it in  2D for your first game(s). So you can work on the other thing like level design and sound effects.

The ball and blocks textures look really nice though.

Yeah, tried the standing still strategy, my performance improved. The dodging needs to be faster to be effective.

Cool game mechanics. It's really fun when you figure them out. The only thing it lacks is in-game tutorial.

For the keybindings, I think it's more intuitive to use S and W to rotate not R, save that for Restart.

Also I think you might have notice there's a resolution bug when you restart the game after losing.

Nevermind, seems to happen with other entries on my machine as well.

I think this is one of the most visual pleasing game entries in the jam.

Seems fun, will play later with cousin. Wish you had spent some time on the AI tho.

But my brain simply can't process the matching :P

I think it would be more playable for everyone if it were rock, paper, scissors like you said, even a little kid could play it without any tutorial at all.

Regarding the help section, it'd be better if there's Next/Back buttons to navigate instead of its auto transitioning to the next image so I don't have to play it many times to get the matching.

It's a combination of healthbar and numbers of coconuts hence the pyramid of coconuts.

I'll look into the layering and physics. Not sure if it's possible to climb on the pyramid without knocking it down.

Hints: Try building a pyramid of coconuts like in the picture.

Thanks for the feedback. I figure that the game needs some kind of indirect controls to help the player progress.

I found a bug where I just spawns a ton of sweets at a time, probably when you lose and press start too quick.

Also do particles work for you on HTML5? It lags and freezes both in your game and mine.

Joystick: is too small compared to its sensitive response. I tried 20 times without falling to hit into walls :(

- Most of the time I would hit into the thin wall after turning around at the arrow. I believe the problem is the velocity got reversed when everything is flipped upside down.

- Another problem is the velocity is not reset when I died leading to immediate crash after respawn.

- The sound effects to me are pretty high pitched. Got startled when the first sound was played.

- I think immersion could be enhanced with the low humming sound of the engine moving through space.

Line of sight, you mean, like those in stealth games?

"a line that would show the trajectory of the perhaps shot bullet for more precise shooting."

Guns that shoot out grenades and land mines is a freaking great idea!

I really appreciate your immensely detailed feedback and ratings! ^^

Theme/Originality: The idea is that each gun is loaded with different and random types of ammo (spike, ice, air blow, fire) but I had overscoped this and only finished the base game. The lesson here is: account for the base for the idea. Also, this was not my first project at all. xD

Design: This is my first experience with level design so I tried to keep it simple.

By "diagonals", did you mean diagonal walls? That would be tough to code, but would make for even more interesting levels.

Question: Not sure what you meant by "more broken up walls rather than solid pieces of them", could you elaborate on this?

Regarding Your Side Notes:

- This pause menu has well matured over a number of my previous games, which is included in my custom project starter. I recommend creating and refining a project template to everyone.

- I think I could easily create a simple tutorial level with one gun spawner and one enemy. I once did this with my most downloaded Battle Simulator game yet here - where you choose your team color then learn to move around and kill the other guy to start playing. 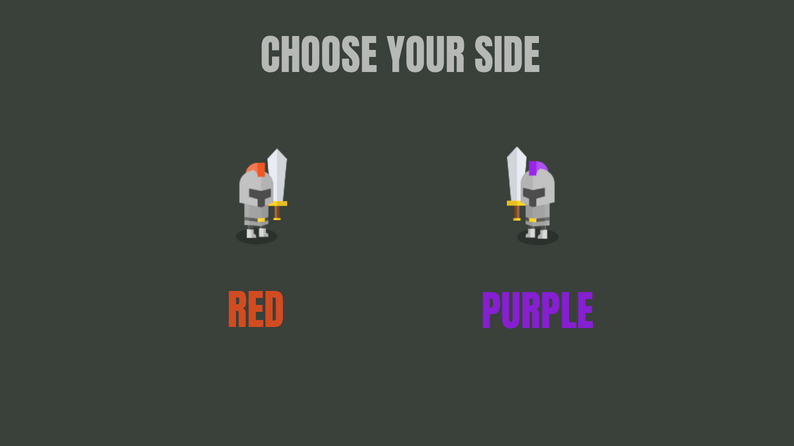 - There IS a countdown timer before the match at the top. It definitely needs to be more visible. Maybe a low pitched voice counting down xP.

- Well, the guns are actually the same, just random ammo counts - since I didn't get to work on the idea with random ammo types.

Audio: Could have been better with grunting death sounds but couldn't find any just yet. Perhaps I should record myself xD.

- AIs are actually for themselves but normally they just clump up together elegantly to create an illusion of teamwork. Also lesson learned: you don't need a complex algorithm for AI, even a Finite State Machine, a bunch of if-else statements will do.

- Multiplayer? It seems to me something far-fetched although it might just be my preconception resulting from people saying it's tough. Anyway, it's still a great idea and a goal to reach.

Thanks again for the feedback! ;)

Why not tag your window uploads tho? There's people who use the itch app to download games.

Reply
Demake JAM community · Created a new topic Where do I sign up for the next Demake Jam?
Dlean Jeans4 years ago

Just found out about this jam and found myself missing out on it.

Cool! I'm downloading your game now from the itch app

You need to setup the uploads in your edit page like this:

Your game currently looks like this in the itch.io app: 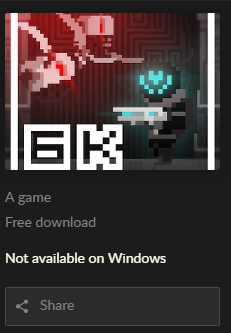 Yeah, that's a good idea. I was planning to enable the AI to guess your future position from your current position and velocity so that it would hit you perfectly. That would literally be a overkill :P

In case you didn't know, AI has been added. Might not  be perfect but there's still room for improvement.

Thanks for trying it out. It's still a WIP so try I'll try to get the AI done on the weekend :P

When it's done, I'll see if there should be more bullets to pick up.