If you want to try doing that. The cmake project will prep a linux build to get you started.

The 1.4 version still works but is no longer being updated... this means there’s no MacOS support for the 1.4 version.

I would wonder if this is something we could script using available itch.io APIs. I've never actually looked, but I know itch.io is very good about being forward thinking and giving us tools!

oh my goodness, that art is absolutely gorgeous

FONTS with an applicable license (public domain, really) ARE acceptable. We don't expect you to make fonts.

Oh yes, my wife and I reminisced about our old Nintendogs from jeesh, over a decade ago. I think that might be partially an influence for what my pet's going to be!

I am unfamiliar with this "Can your pet?" but it sounds like I might not wanna know ;)

Well put, can't really add much to this!

It's also good to remember the theme, Virtual Pet, is really easy to keep a small scope on, and you definitely should. If you try to plan for making a very simple virtual pet with all the basic features, get that working, then in the remaining time you can start trying to just tack on features. Like PhilBlank said, it's more like a tech demo, so if you're hacking things together at the end, as long as it works, there's no shame!

Oh my mistake, he's got someone. womp womp :(

I see on the Crowdforge that Bill's team is looking! https://crowdforge.io/jams/virtual-pets/teams/957

so maybe along the same lines as you had of "feeding the dungeon," maybe make the 'living dungeon' theme two fold and have it occaisonally 'poop' out rewards. for instance, you could have sort've random "food" pellets that when you drop them in the dungeon it spawns either a monster (a skellie, or a slime maybe) or perhaps a hero (sometimes a fighter maybe a healer or nuker-type). so players can kind of treat it as a bit of a terrarium, sprinkling the pellets in, and then watching the 'eco-system' settle itself. depending what dies, maybe that is what spawns new 'pellets' to come outta the dungeon.

that way you try to lean the tables in favor of different outcomes - maybe if more skellies survive, the dungeon is more likely to produce more 'undead' related foods, etc.

Also, if you're looking for a team, feel free to post a reply here, or checkout the #virtualpetjam channel on Rousr Discord!

Oh! Yes, I should also clarify this. I welcome discussion and ideas, just don't do any code or asset work early.

Let's try to all get about 72 hours of time for that.

Really though, the time zones might be difficult for you... we're going a bit honor system here so if you'd like to start a few hours earlier and finish a few hours earlier, that works... the jam is also actually a 75 hour submission period so if you need to finish a little later, you've got a bit of a buffer. Enjoy!

It's a relaxed jam, so teams are allowed. The splitting-ness of the prize is TBD, we'll just see what happens.

oh man, that chart is such a good reference! my idea just blew up.

To get amped I'm gonna start sharing images of the Virtual Pets from yester-year... join in, share some of your faves!

For me - I have always been enamored with the O.G. Tamagotchi... 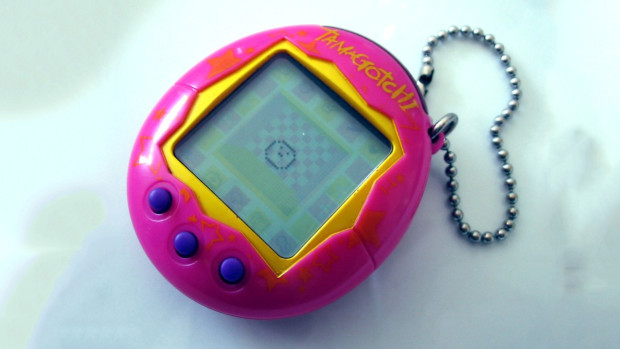 This was based on a true story.

i could just watch that reel for hours

In the end I didn't get it finished - but I posted what I had, as source, on github for any love2d users who are interested.

Been at it all day - I've broken my project into 5 'phases' so that I can hopefully finish SOMETHING to submit, but have a plan for more of the features I want... here's a demonstration of what I've got so far:

Starting to add some UI - those button prompts aren't going to stay up there... I actually had a pretty good 'eureka' moment with this last night... as I was two-days deep into an Entity system I caught what I was doing (writing an Entity System during a GameJam? what?) and rather than continue along my stubborn path and finishing it I stopped myself resolving to just hardcode my Entities... I'm writing this with in Lua after all (I'm using LÖVE), might as well take advantage and get sloppy with it.

So kids, today's lesson is to get sloppy with it.

I also realized the jam doesn't end tomorrow and ends midnight sunday, so with my new direction and all this time I have some hope I can get something finished!

Tonight I set myself the goals of getting the witch in her home, getting her picking up stuff, and getting her to transition between screens... 1/3 so far, and it's getting late... but I'm still going!

Nothing much new to show - a little holed up making a World 'manager/renderer' object so I can get my entire forest up and running. That should be going in tonight and then I can start sprinkling goodies for Miss BrewWitch to pick up... thanks for following along everyone ;)

I spent a lot of time today cutting up my mockups into workable sprites, and then loading everything into the game. I'm using Love2D since I have a bit of a soft spot for Lua and can get stuff up and running pretty quick with it.

As of now, I've figured out how I'm going to organize the game related data, build the world, and build the game objects... I'm using a 'builder' pattern and chaining function calls to basically use script as a game editor:

Not that it's the best time to make a new framework, but it's working out. It's inspired by what I did on my LD36 project (which is admittedly still a work in progress). Anyways, here's a gif of not-much-more-than-before:

Reply
GBJAM 5 community · Posted in How to post pictures?
babyjeans5 years ago

Thanks guys! Doing a bit more work getting everything mocked up into game, but figured I'd show off the logo I made:

Oh I was more just wondering if that was allowed ;)

"All Assets must be created during the jam"

Does this include fonts? I've started just drawing my own letters, but thought perhaps I should ask. A pixel font would be more thorough.

First time doing GBJAM and I've only participated in LD a couple times, but thought I'd give it a shot! I'm working on a game I'm calling "Brew Witch" where you play as a little old lady who runs a potion shop. During the day you'll forage through a forest and cave for ingredients needed to make potions, and towns people will slowly travel to your shop and submit orders for potions for their discreet needs... however, the 'magic' of your potions is a rare resource, a rare resource indeed. In the evenings, you'll travel to town locating unsuspecting sleeping villagers to 'leech life force' out of, but carefully, as if you take too much they'll wake up - It's a tumultuous relationship you have with the village as a Witch, and if they knew what you were up to the jig would be up.