Santa and his dinosaurs have to save Christmas
Submitted by Verzith — 7 hours, 18 minutes before the deadline
Add to collection 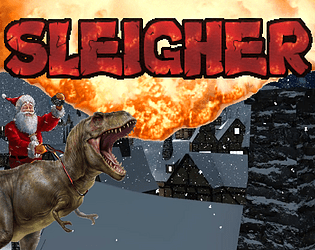 What about the game do you think should be improved?

Didn't you rate it as a "great 3D game" and "nicely polished" earlier on??
Lol.

Verzith made this game solo and followed the rules like everyone else. People have to join itch.io with a new account if they want to vote, so it isn't like there are multiple votes coming from few accounts. I shared the link on my Twitter and Facebook so my friends could support his game, too. How is getting more votes than another game suspicious or unfair? Even the stupid sips dirt dig game had more votes yesterday. It's just preference and networking.

Is it against the TOS to link these games to your friends outside of this website? I personally didn't feel the need to leave a feedback comment because I expressed my enjoyment of this game to him in Discord DMs. I've known him for years as have many who voted in the communities he is a part of I assume. If having friends is against the TOS then power to you, if not, get some.

Yogscast literally created a hashtag on Twitter for it lol.  #yogscastgamejam

Also, having the most votes doesn't necessarily mean it's the one with the highest rating just saying

Are you ok? Verzith is a great guy he worked hard not only making this, but promoting it. And as his friend i tried my best to share it a lot of people like it. Your comment is redudant and very mean.

You for real kid? wow you have zero of the integrity you claim to uphold.

To be real  with you, this comment doesn't make sense. You already said this is a "polished game" now you say it's not polished?

Don't be a sore loser you insufferable cuck.

this game is awesome and Verzith is an awesome guy, he always helps anybody without question, so ofcourse his friends are going to help him.  JosephGallear, you're the saddest person I've seen on the internet, grow up.

In case other people haven't told you already, you need to get a grip - I'm very disappointed you'd say this about someone's other game -Jeff

Impressed with the 3D work on this (espec since its in GameMaker), I wish there was more to it if anything~

I really like this game! I really enjoy the gameplay loop because I do like shooting things. I do miss it not having sounds for the shooting or anything except the music, but I can understand due to the time constraints. Otherwise, a very good game I enjoyed quite a bit! Well done!

thank you,  i'm glad you enjoyed!

not a bad game but it does feel very unpolished to move and look at, still not all that bad of an atempt.

if you have time please check out our game too!

Santa Riding a dinosaur dishing out some serious ass-whooping.  What a game pitch!  Awesome work :D

Gameplay feels smooth, and some more music would've been nice, but I can see what the time went into.

I'm genuinely impressed by this, from the perspective of someone with experience in high-performance rendering, because I had no idea you could use Game Maker's 2D renderer to draw in 3D.

Thanks! ye music wasn't a huge priority but i'm glad there was time enough to add it.
ye GameMaker's 3d isn't superb but it's there hahah.

Great game! Fun to get you in that Christmas mood

indeed! thanks for playing! :)

This is now cannon, as to how Santa delivers the presents on Christmas. Nice job, this is a really fun idea. :)

LOOL that start up menu is fantastic

It gives me a Iron Sky meets Doom vibe.

This is the first game of this jam that made me laugh.
Love the gameplay and music.

Thanks man! Glad it made you laugh :)

Submitted
Oil Me Up!
LikeReply
BigWicker2 years ago(+5)

music is great, gameplay is great and this game showed me and the world that dinosaurs need to be added to Christmas!

what! that music is awesome!  and the dinosaurs are cute ^^

thanks! ye the music brings it all together.

Rocking music. I love the polygons!

thanks! i couldn't be happier with how it turned out for my first Jam :)

Wow this might be the greatest thing to ever happen!