A little tiny cute robot game for the WOWIE! Game Jam 4
Submitted by Ninjago77 — 6 hours, 49 minutes before the deadline
Add to collection 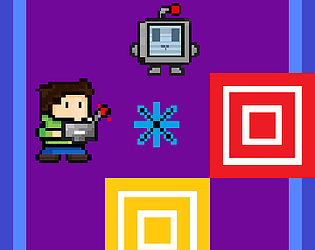 Great job on this. I think you have a really solid idea here, it just needed some more work on level design to really hit high marks for me. I enjoyed playing through everything, but here is some feedback!

1. Level design for this kind of game is extremely important! If you had created some obstacles that would kill the robot, the player would have had to make better movement decisions!

2. I would slow down the bot and smooth the movement. His idle close range movement was the right idea, just needed some polish.

3. The line between the bot and the player could be improved by causing it to alpha down to zero. This would be a really cool way to show the player how much further they have to go before they are too close to the bot! (or increase alpha the closer they get and have it not show when they are far, either way!)

Glad you liked it! I will be adding more types of tiles with different effects after the jam. The bot movement speed was actually a bug, I accidentaly doubled the frames (time of the robot's direction). (I take it that by alpha you mean the colour value indicator) I will add this feature as its a really great idea! Thx for all the feedback, it really helps me out! TYSM!

Good game. Congrats on the entry

Short and cute game. I wish the robot and player were colour coded with the targets though, because I kept forgetting which target was for who. And the robot seems very sporadic and when you control it it feels more like you're weighting the AI in a certain direction

Glad you liked it! I will redo the sprites, tiles & sounds after the jam, so I will colour code them too. TYSM!

LikeReply
The SDBSubmitted169 days ago

Really cool game. By the way which game engine did you use?

LikeReply
The SDBSubmitted169 days ago

Interesting game, but not really a challenge . The game plays on its own. At some levels you just have to move and win. The spark blocks the robot and not freezes, but that is not a problem. And one last thing please make a folder in the rar because when extracted the files are all over the place. Overall good job !

cute game! Looks nice and is based on a good concept. My improvement tips:

Glad you liked it! In controls, my idea was that left hand would control the player (WASD) and the right hand would control the robot [if the line is blue (Arrow keys), if the line is red (RMB for Sparks/Laser)]. I will add a few more features for the robot (that makes him go farther from the end) and a few more features for the player (to help the player) after the jam.  TYSM!

Super short and simple, but it's a cool idea and fits the theme well. The movement feels pretty rough, and overall the game is lacking in polish, but it is fun to figure out how to move your character far enough from the robot to allow the robot to move to the goal on each level.

I didn't have enough time to polish, and I am new to game dev (as this is my first published game) but I am glad you like the puzzles and the game! TYSM!

Short but overall great! Congratulations on your submission

nice game but i encountered a bug, using a spark against robot infront of a wall pushes robot outside and you cant do anything + you didnt add mainmenu , restart or pause feature

OH! I just tested it and there is a bug! Thanks a lot for informing! I will try my best to fix it after the Jam! TYSM!

(Unfortunately I don't have three hands to use all actions >.<)

Submitted
to Give a Leg
LikeReply
Ninjago77Developer170 days ago

The controls where that one hand would control the player (WASD) and the other hand would be controling the robot (Arrow keys) or Sparks. Glad you liked it! TYSM!

My computer cant run it because it considers it a virus! Incredible!

Submitted
A Gallon of Retail
LikeReply
Evan4ikSubmitted170 days ago

Nvm Got it running.

It's incredibly short. And most of the levels are pretty much the same thing, this could work great if it had more levels!

I didn't have enough time to make more levels... but I will be adding more after the jam, bcs I also have a level builder using excel. TYSM!

Sry bout that. Thx for trying to play...

This is really fun and creative, although very short. I enjoyed it enough to play it twice.

Submitted
Do You Even Snail Bro?
LikeReply
Ninjago77Developer170 days ago

I didn't have enough time to make more levels... but I will be adding more after the jam, bcs I also have a level builder using excel. TYSM!

Small cute puzzle game,like idea,not very good execution.AI become annoying cuz he moves ALOT,and while he moving you cant control him properly,Also sounds is very loud and noisy,maybe add option to turn it off or just make them more quiet.

You can make good game from it , if you work on this more.I like it!  Congrats on first game and jam too)

Yeah the robot is meant to be atleast a little bit annoying cause its a puzzle/rage game, I also added the Sparks feature to help with moving the robot. The sounds are a bit loud for many people, I will try my best to fix it after the Jam! TYSM!