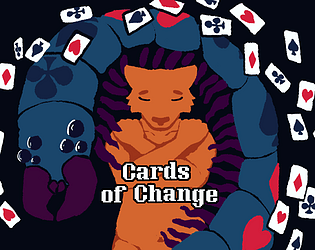 Did you start early?
The content and game were all made during the game jam.
Framework for dialogue was built ahead of time.
The game is an implementation of Donsol with a TF element added to the cards.
The music is from a pack I bought and the one sound effect is CC0.
Dialogue is the Godot Dialogue Manager library.

Very nice! I really like the edge wiggles, and the fluid animation of the insect god. I did not expect such liveliness just from what I saw in the thumbnail.

Full frontal nudity as soon as the game starts really throws out any notion of stealth, haha.

I would have appreciated a more in-depth tutorial. I had to look up external resources for how the game is played, and even then it took a few rounds to get a hang of things. It was fun to master, though.

The writing was enjoyable.

The music was fine, somewhat distracting at first. I think I would have liked sound effects to play during gameplay actions--like sword swipes when attacking, or a loud crack when your shield breaks. It might also work to have sounds for parts of the transformation, and also chittering when the insect god speaks.

Really amazing game! One of my favorite I've found on Itch.io. I really enjoyed the cute story, transformation and the game. It took some time, but I got further every time.

Not really a bug guy myself, but I greatly enjoyed this one.

So the aesthetics of the cards here are absolutely top tier. Full marks on that. I'm not much of a "creepy crawlies" enthusiast, but I do like me a good skull-face. I'd probably pick up a deck of cards like that, dang.

The gameplay works pretty well, too. I initially found the mechanics a little confusing, but when I actually wrote the rules down and kept them open on a separate screen, it made sense. (Black suits bad, red suits good.) Maybe a quick reminder on the main 'combat' screen would be nice? Just for the people like me who don't brain so good. I always forgot the values of the court cards, especially since the different suits use different rules.

It's very impressive work, especially given the short time frame. There's quite a few typos, but nothing that really hinders enjoyment of the game.

This game is AMAZING! It took nearly two hours to beat, but after a little practice, a lot of patience, and a WHOLE BUTTLOAD OF LUCK, I beat it. Definitely worth it. 12/10!

(Don't read ahead if you haven't finished the game, Itch.io needs a spoiler text option)

I can't help but wonder... what species would Izorath conjure up from my imagination and desires? I would definitely attempt the ritual if it were real, just to find out, and to meet Izorath, and to see what his realm looks like. He seems nice!

Submitted
Village in the Trees
LikeReply
eeveeHostSubmitted341 days ago(+2)

Holy crap the TF animation was delightful, and also appears to change parts of you in random order (or at least different order, perhaps based on how much of each suit you've gone through?)

The card game seemed much harder at first than it turned out to be, though I did screw myself a couple times by completely forgetting the values of the court monsters.

I was so fixated on the card game part that I kind of tuned out the transformation part.  That's a compliment to your card game coding skills.  Also, the animations were so smooth!  I'm a bit envious.  ;-)

The card game is based on a game made by John Eternal which I can only find documented by a different artist/coder/game dev. My changes were largely removing a few rules I really didn't like. I always found the OG rule set to be far too punishing for my taste. The deviation are as followed:

1a combined with 2a means that you may be forced to waste potion lest risk being cornered in the next room. I've never been a fan of that and opted out of implementing it. I didn't implement 3a since I wanted to error on the easier side of things.

I don't think I've ever actually won a game using the official rules. So, I kinda changed the rules to something I could win when play testing.

Hold on, you made this all in *one* week? It's got animations, a really fun card game and a whole lot of cool art in it! I love it! Beyond awesome progress for a single week game!

Wonderful atmosphere with a very well picked soundtrack. Everything feels very polished with neat little touches like sounds, shuffle animations, room descriptions and the subtle distortion effect on the portrait. My only complaint would be in regards to the sex scene, where the combination of confusing new anatomy and point of view placement make it difficult to tell what's going on at times.

Absolutely excellent presentation. You should feel very proud of how much you have accomplished on such a tiny time frame. Amazing and an inspiration to other game devs! This is how it's done!

Submitted
Secrets of the Bastion
LikeReply
cowardlionSubmitted342 days ago(+1)

Welp, looks like I just fell in love with a giant and kinda cute insect god, that's not something I ever expected to happen.

The insect transformation really does feels eldritch and the beautiful card artwork really helps with that felling, great choice for theme in that. I also love the constant movement on the sprites, though thats just pretty in general.

i LEARNED bug tf is kinda neat AND about donsol!

Good stuff, the cards were well made, the game is fun. Bug sex is definitely something I didn't know was a thing but I'm going to say it was interesting. Overall, pretty cool game.