It's a race to figure out who can figure out the fursona of their anonymous roleplay partner first!
Submitted by Dr. Dos (@dosmeow) — 2 days, 27 minutes before the deadline
Add to collection 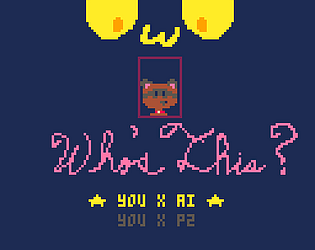 I was confused about what I was supposed to do at first, but when I realized what the game was it went a lot more smoothly. The dialog was really fun!

Lol, furry version of Guess Who, love it, :D

The narrator's exaggerated furry dialogue was a riot to read. While the game itself recreates one of the dullest board games I've every played, the furry spin, the automation and the dialogs make it memorable, and far superior than Guess Who. If anything, I appreciate playing against an AI rather than an unreliable opponent.

The sounds and sprites do work very well together, and it's fantastic that there's such a great variation of looks and descriptions despite the limitations of working with such little assets. It's a bit of a shame that the game just seemingly crashes at the end, but it was more of a minor inconvenience. Cheers! 🐳

Great little recreation of the game with infuriating furry dialogue ;) The title alone is award-worthy.

Very cute! I liked the traits you picked and the feel of flipping the portraits. Is it supposed to halt after completing a game, though? That felt a little confusing to me!

There should be some final dialog about winning/losing, but the only way to restart is to restart the cartridge! I was going to code something in, but was pretty burnt out by the end and hitting Enter opens up a default menu with a reset there.

This was really cute!