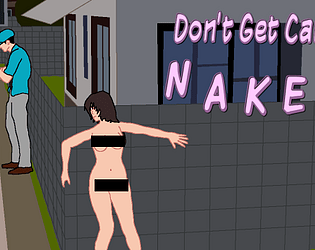 Well designed, and well implemented. Ended before it got boring. Great job.

And the game is a lot of fun! A cute adorable little puzzler that's very cheerful and approachable, and shows a lot of the attention to fine detail that makes the difference between a good game and a great one. Not only that, but it favors a kink that doesn't get a lot of love, and deserves more than it does! 10/10, would streak and take lewd selfies again~❤

Submitted
introduction for a game
LikeReply
Denebola InteractiveSubmitted2 years ago(+2)

This is a very well crafted game, especially regarding introducing new enemies(?) in a way that helps the player learn.

If I were to add one thing , it would be to select the next stage with the enter key, so I wouldn't have to take my hand off to use the mouse. Take my hand of the keyboard, I mean. ;D

I think you've got a really great base here! This is a really cool idea for a exhibition game and has  lot of potential depending on how far you want to take the project! Great work!

If i'm being honest, this is the best game out of the jam. It's got a lot of gameplay and the level design is novel and challenging. Great work!

I really like the idea of a stealth streaking strategy game, especially the twist with the selfie levels (that was a really clever way to motivate having to visit multiple spots in a level), but most of the levels ended up feeling pretty samey to me. Like, for the most part, I just plowed ahead until someone was in my way, diddled around until they moved (because there was always a safe spot right there to do so), and then repeated until I was at the goal.

I think if I were making this game, I'd have tried adding things that you can actively manipulate or use, because you can only passively move and wait around and I think that might limit the kinds of "unique situations" you can get into. A couple of ideas off the top of my head: a way to temporarily distract NPCs by having them pause or turn in a direction they normally wouldn't, and movable cover you can push/pull to block sight lines (I think this could open up some really interesting possibilities if the moving NPCs could also push them around, but then that would add some real complexities to both level design and even just the game logic).

Cool base here for sure though!

This is great! :D

I particularly enjoy the fact that moving to a place that someone is looking is the only way to pass some of these puzzles (people that keep turning around, for example) due to the fact that you move before everyone else. You're basically purposefully exposing yourself :p

You know, that never even occurred to me.

Technically, the actions are simultaneous, and the results aren't checked until the animations are finished. Originally the turn animation went before the move animation, but that obviously became silly once I added the red enemies, so I put the turn animation last without even thinking about what that meant for the purple and green enemies.

(And, yes, the purple enemies were implemented before the reds, even though they're introduced later in the submitted build)

Yeah, I figured that they were simultaneous, but it just makes it look like you're deliberately revealing yourself :p

This is a fun game! I like the puzzle elements, and there were several levels I had to think through in order to get across. Not too difficult, but enough to entertain me!

My only big suggestion is try to use the same input device for your menus. There was some interuptions when I had to switch between keyboard and mouse for menus. Perhaps for next game it can all be controlled with keyboard?

Huff...okay, this is the first one that kinda presses my buttons. The puzzles are nice and simple, and the end-of-area pics are solid. I was kinda curious if anything interesting happened if I *did* get caught, but that's just me. :P

I think the puzzle concept would need a little something extra to really make it shine in a larger game, but for a smallish game, it doesn't wear out its welcome before the end.

"I was kinda curious if anything interesting happened if I *did* get caught" - uh same? 😊

Cute and lovely. I gave you an extra point on stealth only because it would be in the spirit of the game to try. :P

This game's concept and puzzle execution both really shine!  I'm very impressed at the level design, which delivers a lot of sound puzzle gaming!