A badly translated RPG.
Submitted by Clipper — 6 days, 4 hours before the deadline
Add to collection 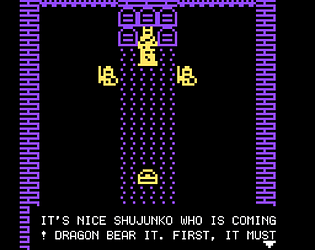 Challenging to read! I included it in my compilation video series of all of the games from the Kenney Jam, if you’d like to take a look. :)

Really like the premise of this! The graphics very much look like a bad ZX Spectrum game, and the translation is completely unintelligible.

I didn't really know what I was doing, but I still found it a good time. Well done!

In keeping with the spirit of the game, my review has also been badly translated to hecc and back. Here goes:

He's determined but can't do that

Indeed, it feels terribly translated! Loved the concept and execution, could have used some sounds though.

Great art style. I like the idea of a bad translated game. Pretty cool!

I liked this one quite a bit! Bitsy is a cute engine, though it seems it got some new features since last time I tried it? I liked the rainbow and jumping text! Some of the dialogue was quite funny, my favourite was "Bees remove the crap".

It was kind of hard to figure out how to get a good ending, though I did manage after a bit (? I think? I don't know if there's more than "You're Winner"). Well done!

I really liked that you used the custom noun feature to make it "run trainwreck" :D

Thanks, and "You're Winner !" is indeed the "good" ending.

Like the game and style, just find the badly translated  dialogues annoying/

I really enjoyed this.  Didn't manage to finish it yet but I plan to come back to it.  Great work!

The game is really, really committed to the retro look and feel (fantasy console or engine?). It really does feel like something you might see on a ZX Spectrum or something.

Somehow it manages to have an adventurous feel despite the limited graphics and gibberish text.

The graphics. Some people like this style, but I've never been a huge fan. However, there's a bigger problem in my mind.

With minimalist graphics and very limited gameplay, the player's experience is 90% the game's text, which is unreadable gibberish. It's funny at first but quickly devolves into randomly running into things in a vague, soulless world. When you inevitably die and get sent back to the beginning, it becomes tedious rather than fun.

I'm kind of on the fence of whether it should have had music and sound or not. Maybe beeps, nothing more, or it would ruin the retro illusion.

I think so. It certainly wasn't good good, but it held my interest and had a charm to it. It kind of felt like a mistranslated bootleg game which I think was the intent.

Impossible because you have no idea what's going on is a little different than just being impossibly hard. I think that's a neat take on the modifier. It's not my favourite take on it but it's a step above just plain difficulty in my mind.

I did not beat the game. I may go back and try again.

I think there were some really good ideas in this entry, and it is definitely a neat little game, but the elements don't quite come together.

Oh.... oh my gosh.... I really love the concept of this! Seeing the horrid translations is hilarious, especially how bad some of them come off hahaha. The graphics I feel are really cute. I am not sure what everything is suppose to be at times, but I dunno, I just really love this style. I don't know if it is possible to advance at all, since there seems to be no battle controls? At the forest where there was 2 ways to go, I tried both, but the...I assume wasps? keep killing me and I can't fight back, though perhaps that was done on purpose for the modifier, and in that regard, you did well. Honestly, I would've loved to see this expanded upon further (unless I am missing something that is preventing advancement, everything is literally lost in translation hahaha), but despite the super short experience, I enjoyed this little bite-sized game. If you ever expand upon it further, I am definitely playing it!

EDIT: I figured out how to pass the "the wasps".... having even more fun with this game, haha, it's my favorite entry so far! 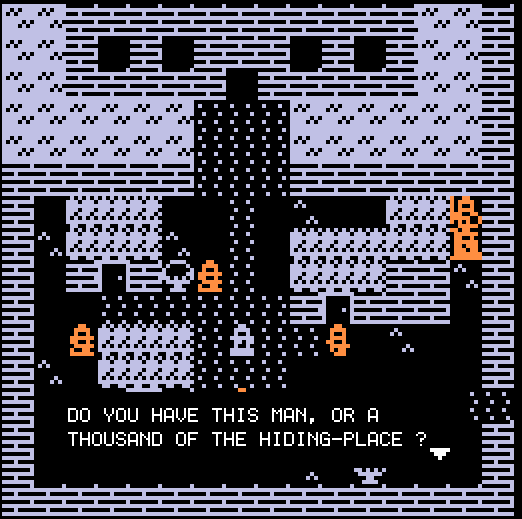 I think I'm not ready to whatever deep meaning this has.

Submitted
Duckluck knocks on a door
LikeReply
gamedevlibrarianSubmitted1 year ago(+1)

This is super cute and funny. I love this concept!