Submitted by johnsoncodehk, h2so4 — 27 minutes, 5 seconds before the deadline
Add to collection 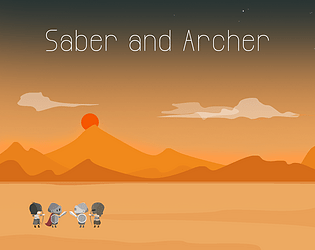 All assets are licenced under the CC license: https://creativecommons.org/licenses/by/4.0/

Cute game! I included it in my Open Jam 2018 compilation video series, if you’d like to take a look. :)

Hey, so far I only played the 1.0 web version and was alone, so take that into consideration. Two bugs first off: My sound didn't load until I was maybe 15 seconds into game. Secondly, after the game, the Quit button just froze the webpage and I had to manually X out of it.

Okay, onto the game itself. Great presentation on display here. I have a lot of specific ideas for where this could go and what I'd like to see out of it, here they come. What I want specifically, is to be Legolas in this game. I think the right mouse should give the option to switch between Bow and Sword and you can ditch the distinction between the two types, giving the player something to do when the mobs aren't nearby. I think the player's sword attacks should be a little cooler than the mobs, maybe a 1-2-3 swing where the third one can cleave a bunch of these suckers. There could be cover to hide from the archers, which could have better accuracy, perhaps some ruins or something.

There should be an incentive to storm the castle, right now its too dangerous - its better to just chill in the desert and let these fools roll up to die. I like the idea of a King mentioned below. I was thinking some kind of structures that the enemies spawn out of, and if you get there, you can destroy them, or they put up a white flag or something. Also, when the player respawns, it should wipe out all the mooks nearby, sometimes I spawned and died instantly because I was surrounded.

You obviously know what you're doing as a dev. Keep this going, add some unique elements, and you're on to something that regular casual players are going to want to play. Well done.

Thank you for your specific advice!

I am not familiar with Legolas, I searched for Legolas videos on youtube, and now I really want to add a Legolas role!
I thought at first that if the character can use multiple attacks, it is not enough SPAM. But I think your suggestion will make the game very fun!
If this game continues to develop, I will actively consider these suggestions!

In the end, I am actually the role of the game developer. It is not enough experience as a game designer. I am surprised that you found this :)

This game was fun, i already said in a reply to the coment on my game (i really appreciatted trhat :), but i had a few complaints and ran into a few bugs.

Fisrt: the bugs: The only bug i encountered during my play time, was that if you go up the stairs and went backwards in the Z axis, you will fall behing the stairs, and there is no possible way to go back since you paced an invisible wall... you can either make me lose a life and respanw, just make me respanw or make the invisible wall bigger so it doesnt happen.

Now the complaints: The character is way too small. i read all the comments bellow me and almost all complaint about the same thing. But thats a minor thing and doesnt affect the overall experience (maybe it does a little, but i didnt feel it, so....)

I have no idea how to win or if there is even a way to do so. Perhaps adding a character as the king, and if you killed it, you won. That could make the player want to archive that objective, and make the game a bit more fun. Correting myself now after reading all the new versions addings, and i think thats a fine solution, but perhaps a bit too cheap. Still, good to know you already adressed it :)

And lastly, i want to try online. So lets meet up on discord sometime tomorrow and play it together, im intriged by the nature of that claim.

I think this is a pretty good casual game and you archived to follow the theme of the jam. i dont think you expand this game much further, but it doesnt hurt to polish it here and there. Perhaps adding missions and other cool stuff.

Oh! I got an idea with the kings: having a king mode where two players combat ech other by deploying soldiers and archers to defend themselves and attack the other. That can be a thing, and if it does become a thing, make sure to add some more different characters to make some variety.

Welp...thats bassically it for me to say about this game. I liked it for real and want to help you polish it as much as you can, so that was all my advice.

Thanks for checking my game, and congrats on completing the jam with a cool game. Hope to see youy soon :)

Wow! Thank you for your review! Very detailed, helpful and friendly!
(Because my English is not very good, I usually don't post very long text, so I only gave you a short comment, sorry for this :P)

I also like the king mode you proposed, which gives the players a reason to fight and bring more cooperation to the game.
This game is currently only made for OpenJam, I agree not to expand it. If this game continues to develop, I will add the king mode and more roles :)

Of course, you are welcome to try online mode!

Just see you in discord tomorrow :), and my discord username is johnsoncodehk.

Finally, thank you very much again!

The characters look really good, but they are so small! Increasing a size a bit would really make it more easier to enjoy the cool sprites.

Impressive that you could pull of a multiplayer mode in such a short time, too bad I couldn't test it (no games open, and of course in the few minutes I player noone else joined).

The hitboxes are really strange. I can't really hit anything if it's not really close. Also I would expect that firing an arrow would hit the spot where my mouse points to, but that is not the case. Having some kind of marker where your arrow lands would make this much more easier (maybe too easy? hard to say).

Different enemy types seem like a cool idea but most of the times the enemy archer basically couldn't hit me. Of course too much accuracy would also be bad. Maybe all enemy archers coordinate, target an area (that also gets marked beforehand) and then after ~30 seconds kill everyone in that area? Players would need to move and could even use it to kill enemies.

Thank you for your helpful suggestions!

In fact I don't have enough time to complete the archery (in order to complete the multiplayer function), the game is a three-dimensional space, the operation needs to control the angle with the mouse, and the up and down movement controls the Z-axis (Like clip doll machine). Therefore, it is necessary to judge the Z-axis position of the arrow with a shadow.

I just updated the version on Github Pages, added shadows, and zoomed in on the characters. I hope you can think that archery has become reasonable!

Great graphics, good sounds, good concept. A bit awkward sometimes to hit with the archer, but when you start spamming and they all die its satisfying.

Thanks for your comments!

I added a shadow to make the archery method easier to understand and will update the game after the vote is over!