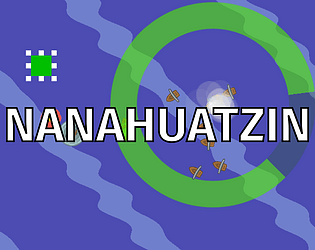 I wish the button wasn't ctrl! I included it in my Open Jam 2018 compilation video series, if you’d like to take a look. :)

I love that you made a coop game ! However if I'm not mistaken a player can't do much except when it's its mode or did I miss something. The sound effect are well done but the build "progress bar" could be a little more self explained but you were surely short on time which is understandable. I also like the cute graphics. Good job overall ! :)

Balance is really horrible off between the players, but even in the end I wasn't really sure what abilities should exist and how they should be distributed. Shieldship without the building ability felt really boring and we wanted some kind of tower defense included so we gave him the ability to build the towers. But what to give shooter ship? Maybe a different kind of tower?

the build "progress bar" could be a little more self explained

Absolutly! In the beginning we started with geometric shapes (in the code ShooterShip is still named "Triangle" and ShieldShip "square"). When looking for some art  we decided for the pirate pack from kenney, but unfortunately a "half build tower" was not part of that. Unfortunately our art guy had no time to join us this time so we were left with two programmers.

This game always crashed for me in the browser (Chrome, Win 10), always as soon an enemy collided with one of the player ships. When I downloaded the Windows version, it worked fine.

I wish there was an AI or follow mode for the buddy ship since I didn't have someone around to play with. I like the gameplay, cruising around and firing the cannons feels good and the slow turn fits for a sailing ship. I expected the cannons to fire broadside shots, but I guess they don't have to be. Maybe could be an option. I was imagining how it would be cool if this were more developed and there was little crewmen on your ship and when you got rammed, they got boarded on and fought a little battle before you lost HP. Thanks for your game!

I have no real idea why it crashes, on my (low spec) laptop it crashes as soon as it loads, on my pc it works fine. Interesting that it only crashes for you when colliding. I think it may have to do with size, we also put source assets into the godot project and godot imported them all and bundles them on export, although they are never used. Maybe I'll push a version with the source assets not included anymore, at least on my laptop that fixes the crashes.

To be honest we only did an web export because we saw that many other games have one and that it should also be easy with our engine. So we just exported, but did no real tests, e.g. shooting is on ctrl, other ship sailing north is w, so if both actions are done at the same time the browser tab closes.

they got boarded on and fought a little battle before you lost HP.

That sounds like a pretty good idea. I think I'll include that!

This game feels fun to play. I enjoyed the asymmetrical multiplayer aspect of it too. Pretty nice sound design.

It did crash my browser however... Not sure how that happened.

Submitted
Pinball But It's Only Multiball
LikeReply
syntonymDeveloper2 years ago(+1)

It did crash my browser however... Not sure how that happened.

I think it has something to do with size, I mistakenly put source assets (svgs) and actual assets (png) side by side, and godot just included them all, although the svgs are never used. I'm just pushing a new version with SVGs no longer included. I can no longer reproduce the crashes now.

Fantastic sound effects and interesting gameplay. It is very straightforward which ship does what and there is also a subtle depth in the way too ships work together. I was thinking if you want to encourage coop to the maximum, two players could be sharing the same health bar, because now players can aim at outlasting the other player, drifting away from the game's purpose. Besides that and a restart button, there is not much I could add to this, great work!

Thanks for playing and the feedback!

I thought that a shared health bar might produce some negativity between players if one is worse or more reckless than the other and dies more often.

I think I have to refine multiplayer a lot, not being able to play at all if you have noone there is more than suboptimal. Maybe in a next version.