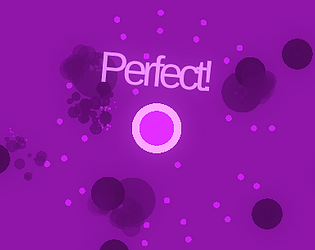 Simple looking, fun game! I included it in my Open Jam 2018 compilation video series, if you’d like to take a look. :)

Hey man, nice one! I have to echo the others who pointed out that the rhythm of the Spacebar presses doesn't quite seem to match up to the music. I ended up muting the game after awhile to better focus on the pulsing circle. In fact, my eyes were on that little circle in the corner the entire time, which makes me wonder if it wouldn't be better to have that effect happening on the player themselves?

Before I muted it, my main incentive to keep playing was that I hoped the music would burst into some orchestral madness,  maybe with some big bassy drop as you suddenly get swarmed and your burst radius rate increases. If it does develop to that level, I never got far enough, maybe around 300 pts?

I noticed that the controls on the Unity popup mentioned that mouse presses should fire, but pressing the mouse didn't do anything for me. Also, after I died and reset, the white circles that give the powerups appeared only very faintly, almost invisible, which meant that I had to manually reset the game via Alt-F4 after dying.

Overall though, I enjoyed it! I hope this is not a discouraging level of criticism. I only offer it because I think with some polish this game has potential. I'd like to play the next build if you improve upon it after the jam!

Hey Landyard. Thank you for the feedback. I don't think that your eyes should be looking at the circle at the bottom left all the time because it's not the intended gameplay, but putting it on the avatar itself as you suggested is a great idea. Regarding the development on the music, I agree there should be more to it after the drum and snare, I wasn't able to find something that matches with the rest of the track so it stops after the snare sound. "Unity popup mentioned that mouse presses should fire" the game does not have mouse control, may I have more info of where that popup is from? Also, hear you on the alt-f4 thingy, should have let players quit with ESC or something, but the powerups appearing faintly is very strange and shouldn't happen, I need to look more into that.

That is not at all discouraging, I only feel bad because I rush out a game that has so many flaws and no gameplay. But the feedback I get here is incredible, everyone is super constructive. Again, thanks you very much for the feedback, I really appreciate it!!

Very cool rhythm game. Could not get it to run on Ubuntu 18.04 though. The time you need to hit the best kept dragging further behind as the game went on. A good way to fix this would be to have whatever is handling when the beat comes in to poll the audio player to find out where in the song it is. Though only periodically probably since doing that every frame might create slow down. I thought it was funny when later in the game you get spammed with enemies, fun game overall!

Submitted
Pinball But It's Only Multiball
LikeReply
SouthoceanDeveloper2 years ago

Thanks for playing FigyTuna! I had a webGL version but it has performance issue so unfortunately that is off for now.

Regarding your suggestion, it is the solution in the game, pulling time from the music to trigger the beat animation and all. May I ask how long did it take to get the animation significantly delayed that you miss even when pressing on beat?

Yeah, it didn't take long at all before it felt like I needed to tap on the "and of 1" which was kind of ok because the song had a notable punch there. Maybe 10-20 seconds at most. But about a minute or 2 in it was totally on the second beat which felt weird.

Got you! I will look more into that, thanks a lot for the insights!!!

This game was great. I liked the idea of it. It was kind of hard to see how the theme connected to this game, but i think i get it now.

Just a few complains: The guitarloop kind of gets repetitive, maybe add like a proper song and let it reset everytime you respawn, cause having it constantly play makes it kind of obnoxious. The movement feels a bit awkard cause i didnt feel like i was moving at all, perhaps adding some shadows like some games do, or some background elements to make the movement feel like movement.

Now, the beats: The feel really off, it was really hard for me to concentrate on getting the beats right cause it was mostly watching the little circle instead of hearing for the actual beats. Try looking at a game like Crypt of the Necrodancer where beats are constant and it is easy to keep track of every beat because they were on sinc. Your game lacks that feeling and its a real shame.

I do see a future to this game as a real fully complete game on steam or the app store. Perhaps a bit of polishing here or there and you will be golden.

Hey thanks for the feedback, that is very constructive! I hear you on everything, the off-beat problem appears very significant on web build perhaps due to performance issue of my bullet hell. I agree the guitar loop does get obnoxious when played constantly, I will try to work with a real music track next time. Anyhow, I really appreciate your feedback! It's unlikely that I work more on this project but Im very happy to hear your encouragement!

Also I think the music could change more with more difficulty. I think there are additional drums and snares, but the base loop gets abit boring after a while.

Movement also seemed to not affect too much. Mostly I focused on getting the beats correct and just moved randomly until I saw a "white drop". But I just played until score ~60 or ~100 so maybe movement gets more important later on.

But otherwise I like your game and with increased variaty (longer song, more songs, "tapping" not only on main beats but varied with the song, movement mechanic maybe connected to music, maybe level design connected to music?) I would actually like to play it as a "proper game".

Hey thank you for playing and leaving very constructive feedback. There is a bit of silent in the beginning of the sound played when pressing the button, you are spot on with that. I played the game too many times so I did not see that at all. You are also right about everything else, the movement is not that important, I just encourage movements by having the white dots. I would love to have more substance in the game but I've done everything I could given the time :D. Im glad you played long enough to hear the drum and snare, and again, really appreciated your feedback!