Submitted by Artyom Gabtraupov — 8 hours, 8 minutes before the deadline
Add to collection 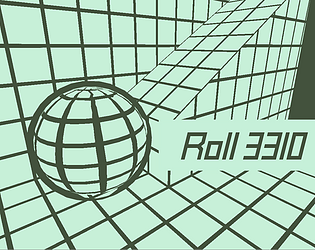 Good idea, but it wass very difficult to understand what was going on...

This is not a bad idea, I tried to play it many attempts because I like this kind of games but result is barely readable on screen. Polishing small details like ball texture and camera system and tweaking controls this same game could be much more enjoyable. Also it is a pity color restriction wasn't satisfied because of antialiasing.

Restrictions:
If you look at it... it might not be a shader. For me it mitght be simply lowered resolution? Nevertheless, it has colors other than the two that are allowed. Since it has ones between the two. (And it's pretty unlikely to run on the Nokia 1130 but this doesn't really matter for me.)

Other:
Since it has such a low resolution, it is really hard to distinguish what's what. I think it would have been better to just give the ball a dark outline and leave it bright, since then it would be way easier to know where it is. It could have been a great game, but since it's so hard to see, it makes it so much less enjoyable. Not a bad game, but it would need some changes.

Haha.... it actually is filter :) I know it wouldn't run on a real Nokia 3310, I just wanted to make something most people wouldn't (a 3D game) to stand out from the other games :D

Well, you managed that for sure! :D It did stand out.

Really hard to control in this resolution, but good job!

That was interesting, the colors seemed a little wonky but otherwise it was a pretty fun game! Good work! Feel free to come check out our game Nokia Explorer!

Thank you, sure will!

Quite a fun little game only probblem is that its just not realistic at all for a Nokia 3310 to run, and its really just a filter put over a 3d unity game and that creates quite a lot of the games floors. such as trobble telling whats ahead and everything feeling sort of messy. i would have much reathered you removed the filter and make it its own thing really, the filter lets it down masively.

Wow, good work. I bet it's hard to create 3d game in this low resolution.

Cool game although I'm not sure it's the right type of game for this type of jam regarding the pixel limit, it's just too hard to tell what is going on.

Thank you and I know. Actually the intro animation serves this very purpose :D. I wanted to tell the player that they in fact control a ball (because it's pretty hard to tell otherwise.)

looks very cool, but its a bit hard to win