Rhythm Game made in 72 hours for Music Game Jam 2017
Submitted by ryanford, Cody Loyd (@codyloyd) — 19 hours, 32 minutes before the deadline
Add to collection 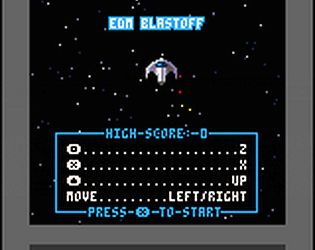 Please mention below any pre-made music or art assets you used.
original content

Nice little game! I included it in my Music Game Jam compilation video series, if you’d like to take a look :)

Really great job! The rhythm aspect is simple, but damn effective. The party mode is a lovely addition!

this one is great! I like the idea & execution. it's just the right amount of confusing.

Damn. This one is good. Really good. I honestly didn't think I'd like this as much as I did. Haha.

The multitasking is pretty fun and easy to do. From trying to make sure you're hitting the right notes at the right time, and avoiding the meteors hurdling towards you, this actually has to be one of the most solid games I've seen so far. I'd love to see more added to this concept! Take your good rating you!

The graphics remind me of a Ludumdare39 entry I played so it was very familiar. Not sure if the "O" was supposed to be "Z" but that's what I kept pressing and it seem to be right. The added challenge of dodging the meteors is a nice touch and, after the initial "when and what am I pressing" is passed it is find to keep up with the beat. Nice work.

There's a rather large key index on the start screen, although you're not the first to mention having overlooked it. Those are the official glyphs for pico-8, which supports 2 player controls. So each player has a o/x button and a different set of directional buttons if they're using the keyboard. We opted to stay true to pico, and compromised with the instruction display and a note on the game page. Might have to do some research and see how other pico-8 devs dealt with publishing to non-pico user markets I guess. Just for clarification, did you overlook the key index or just misinterpret it?

I missed it probably from playing on a 4k wide monitor and only looking at one side of the screen missing the ellipsis connecting the two. Since most of us are trained to read left to right, perhaps swapping their placement would help. It is there and very obvious once you mention it but some how it was easy for me to miss  :/

Thanks for the feedback, I appreciate it

Partymode!!! Really enjoyed this one haha. A bit of multitasking (because you also dodge meteors at the same time, not in a brutal manner). One thing that is lacking is more "party-going" feelings on Party Mode (not on a wasted level like clubs and bars do, since this one's safe for kids and teens). I can see that there's more fireworks exploding (just graphically which is fine) but some mild light flickering frames (or let's say a mild disco feel) and probably more intense things would occur, like... more graphic I'll just say, for now it's enough, but on a super distant run, it will get repetitive. I would commend how portable the game loads on our turtle internet. And here's a conclusion, out my enjoyment. Thanks for this game, that made me smile a lot starting at "Partymode!!!"! 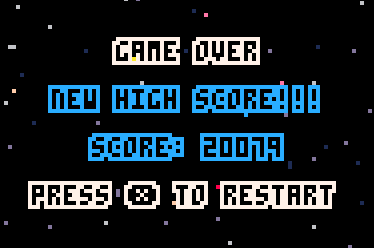 Yeah I think we both would like to, at some point extend the game to have a few more 'areas' with different backgrounds, obstacles and maybe music, just didn't want to over extend for the jam. Pico-8 gets the credit for the portability, and I know the feeling, I'm on the same turtle-net you are I think. :) Anyway, thanks for the kind words

LikeReply
Chase of BassSubmitted5 years ago

Nice work!  like the music and art! the square instead of a z kept throwing me off but limited pixels so i get it.  PARRRRTY MODE! xD

It's not a limitation thing, it's just those are the official button glyphs for Pico-8. We were talking about it during dev if we should stay true to pico which might confuse people here, or just use the literal keys. Compromised with the giant instructions display on the start screen.

LikeReply
Chase of BassSubmitted5 years ago

interesting, i didn't know that and the giant instructions were a good compromise lol I meant more like when things are happening fast it's hard to remember to associate the square w/ z lol but I suppoose if I used pico more I'd be used to it :D

There's a lot to love!! The simplicity, the music, the genuine fun..!! I struggled for a bit because I was a bit of an idiot and only read the description at the bottom, haha, and didn't look at the controls screen at the beginning. But once I got the controls down, it was a lot of fun!! I especially love how you have to do two things at once, which on their own would be easy, but together present their own challenges.  It's a really good and well executed idea, good luck during this voting period!! I hope you do well (:

Really like the music. Struggled a bit to realize what the symbols meant, and never quite managed to figure out what the rhythm was. Still enjoyable though, just a bit outside my skillset I think lol

Quite fun once I figured out the glyphs! Really dig that tune, and the SFX are very satisfying. The difficulty ramps up nicely and gets good 'n lively. Party mode feels good :D