The adventure of JanView game page

game jam
Submitted by Abd-Elkader — 5 hours, 25 minutes before the deadline
Add to collection 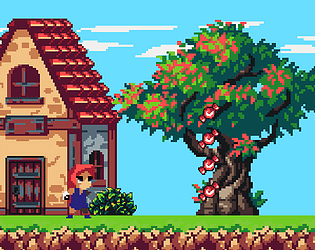 The adventure of Jan's itch.io page

That's a really cool game ! Although I managed to bug the game after hiting restart a few times, the game went into a "let's keep restarting the level again and again and again" :')

Thanks for playing! Thats so cool i want to see that XD, i try to hit restart button a lot at the first level but nothing happen :(

Nice game art and story! love the music and sfx too... the transformation sfx is a little bit anoying but overall nice game my friend!

Thanks for playing! yes i noticed that it is very annoying especially when you shoot more than one, i will fix that.

A really pretty game and an interesting concept.

I just wish there would be more elements you could interact with, since the main mechanic has a lot of potential.

Other than that, the game is really enjoyable, good job !

Thanks for playing! I was a bit hurry since i was running out of time, maybe if i remake the game will do a lot of object you can interact with with better level design.

Visually pleasing and an interesting concept!

i love the art and the game mechanics but it would be look more clean if u add back ground and tiles variation.btw good game.

Thanks for playing! Thanks for review i will focus more in level design in my next games.

Nice concept and idea. Liked the idea of growing things.

this is great! very fun idea, and nice use of shooting things and changing size to complete the puzzles. i enjoyed this a lot!

I can't play this because I use a mac.

You can now check the game page again

okay I'll check it out.

A really sweet story, in both ways with the collection of candy and the ending. It really reminds me oh how innocent people can be. On to the game review, it was alright it's really the same mechanic used throughout and that's not bad especially in a jam, there was a bug where jumps would be cut short near blocks and in general the controls could be improved with a bit more responsiveness and less floatyness but I can't really say a whole lot of bad things about it, some extra mechanics or something would be nice to break up the pace but it's a nice little adventure game, and so I would normal say good job at the end but to you I say thank you for that heartwarming ending.

Thanks for that great review! really happy that you loved it.

But I found a bug during the level when you go in the "small" space and you press E to transform, you can't go back in the small size and you can't move the sprite (I think it depends by the collision?).

In any case good job!

Submitted
BACK TO THE NACHOS
LikeReply
Abd-ElkaderDeveloper2 years ago(+1)

Thanks!  if you get stuck you can press 'q' that will restart the level.