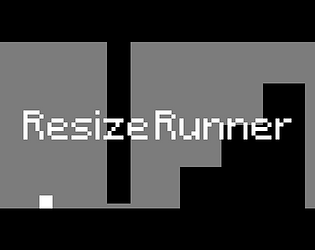 I liked the different powers but the platform designs ended up being a bit too repetitive.

great concept for a runner !

At first I was like "when is this level going to end???" but then I realized that it was infinite.  And for some reason I kept thinking the up arrow was the jump button, but I had a lot of fun trying to master the controls. I also like how the obstacles became more difficult the longer I survived. If this game had music then it would be complete.  Also it took me a while, but my highscore is 2:06.

Really simple small game but really entertaining as well, sadly beating 2:44 is too hard, the best i could do was 1:31. Some fast-paced music would make it feel better, great job anyway.

The size changing mechanic is really cool! I like how there's a tradeoff between size and speed.

This is a really cool game! One thing I would have liked is to be able to use WASD and for what i´ve seen, I can´t. The presentation is nice but it could have used some post processing (bloom for example), but the use of the limitation is great.

I really liked it. Gets a bit repetitive but it´s still fun. Fun game :D

wasd and space work the same way the arrow keys and z do i just didnt have space in the tutorial area to write everything down. and thank you!!

Yes I´m sorry, I didn´t realize that. For some reason WASD wasn´t working at first. I really like the concept btw, keep updating it.

I really enjoy games like these, so I had a fun time playing it!! Good job.