An outside-in arena shooter in 64x64 pixels
Submitted by Mugs Games (@BarrySkellern) — 17 minutes, 11 seconds before the deadline
Add to collection 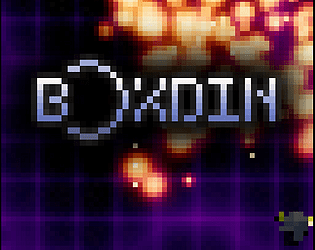 Really night affects! I included it in my LowRezJam compilation, if you’d like to take a look :)

Spectacular game!  I loved the effects and the music is superb.

Submitted
Under the Weather
LikeReply
YUITISubmitted4 years ago

I initially thought it was a twin-stick, but it's totally not, but still really challenging and really well made! Nice use of Unreal Engine there, the graphics look great (explosions! *_*) and the audio really fits and gives a nice vibe for playing it! :O

I enjoyed it a lot, it did my brain in with the controls when you go upside down :) Would be good to play with a spinner controller.

Nice concept, although I was not completely happy with the bullet paths (and they felt to slow). Also agreed to other posters regarding controls. Definately nailed the arcade feeling and also liked the ranking at the end :)

Hey, come back and criticise when you reach Legendary rank ;)

Thanks for playing. Fair comments. The slow bullets are deliberate, otherwise you wouldn't be able to get to the other side of the arena to shoot yourself (and making the ship faster just makes it too twitchy to control) - but I agree it feels odd and maybe dropping the ability to kill yourself in favour of faster bullets would have been the better design.

Cool game. The music is good and I like the background. The idea of shooting into the center is neat and well thought out - the lasers that shoot along the edges are a good way to force the player to move around the arena. I think an interesting thing to add if you extended this would be enemies that can only be hit from certain directions. Though  the directional controls can be a bit confusing, I can't think of way to do them better.

Cheers, glad you enjoyed it. The binary score was mostly to save pixels :) I'd used the whole screen for gameplay and with the player ship going all the way around the edge I didn't have anywhere to put it! It does tie in with the ranking system too though, so you really only need to look at the rightmost bit - you get a new rank for every power of 2. I should have added a decimal score result to the rank screen but ran out of time - the last evening was a huge rush! Thanks for playing.

This game made me feel like playing an arcade in the 90s!!! The music is AMAZING and I love the arcade feeling overall!

Thank you, especially about the music, that's very kind. :) Glad you enjoyed it.

I enjoyed the concept. But I think the controls are confusing  when you leave the bottom of the screen, although they're well implemented (you could try to invert the controls when you are on top,  after release button, and "un-invert" when on bottom after release button). And I think instead shooting to the center, you could make the ship shoot forward all the time. In my opinion, this would not impact gameplay so much and you would need to rotate the pixel ship, considering this resolution. The visual effects are nice,  and the song is cool. I think this game is would be better in a higher resolution, with vector or 3D graphics (for being able to rotate the ship).

Yep, all fair comments. I'd like to retry the same idea with higher res and also a better scale - the arena is too cramped at this res but I can't make the ships any smaller without losing clarity. Glad you liked the music. Thanks for playing.