Submitted by Darren — 5 hours, 27 minutes before the deadline
Add to collection 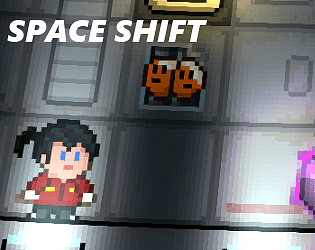 I also included it in my article of favorites from this jam here!

Really funny, well made game! I included it in my LibGDX Jam compilation video series, if you would like to take a look :) https://youtu.be/rZ65V6EgGiI

I certainly liked the look of it, including the computer's face. The background music was very good.

Fun and entertaining. Should be great for the tween set. Thanks for developing.

Great game and awesome perspective effect on the ship sections. It'd be good to make turns faster and to let the player move around quicker when there are no enemies around.

Enjoyed the game. A fun and creative concept that fully worked only system. HP x64 Windows 7

I meant to add a continue feature for the jam and ran out of time at the end. Post-jam I will work on better balance for the random stages. Thanks for playing!

I keep getting to screen 4 or 5 and getting killed in 1 turn from full health by a tripple blob or those spheres of death, but getting back there takes too long with all the un-skippable dialogue! would have been nice to resume from last screen maybe. It sounds great and the pixel graphics and shader look cool, just disappointed I can't see more of it!

Very neat and innovative game! I like the sound concept, very nice!

@Fivemedia, I think I've fixed it with new version 1.0.2. That's a second shader issue, apparently. I use the atan function in the fragment shader to curve the scene, but if the atan result returned is incorrect, it would result in streaking like I think you're describing. So I switched to the other version of atan (the non-atan2 version). Hopefully that gets around whatever issue was causing the streaking. Thanks for letting me know about it!

Worked on my iMac at home no problem.

Great game. I like how it riffs on the theme Life in Space with daily space chores.

I think the problem might still be there on some machines. I'll try it on my Windows machine later tonight- but on my MacBook Air with Java 1.8.0_20 the main screen is a bunch of crazy wavering blue and white lines after the intro.

Version 1.0.1 (submitted after the jam deadline) fixes a shader bug that can crash the game on some computers after the intro screen.