Alien Adam is a short 3d platformer with randomized worlds made for Kindreds Community Jam #6.
Submitted by MasterBooter — 5 hours, 33 minutes before the deadline
Add to collection 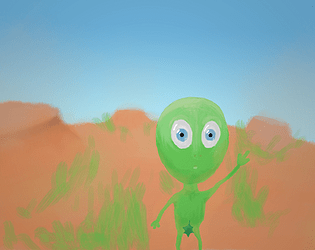 Love this goofy little alien. He has so much personality in his movement, idle, jumps, etc. and it's hard not to enjoy seeing him on his journey. Art style is simple and cute, and the random world generation is really neat to see in a 7 day jam.

The game would've benefitted from a game over screen or restarting from the last point as opposed to kicking us to the main screen. The first time it happened I was very confused. I didn't even know about the spikes hitting me until the second time around. Otherwise pretty solid!

Simply Game - But so exciting to play, the FXs and music are so cool, the animation is also smooth! the main character is cute and autogenerated decorations fit the game nicely! I would like to get some motivation at the beginning, some little intro, instead of a simple goal to collect all the raspberries

I like it. The personality of the game really sells it. Adam's little run and especially his jump animations. It has the angular style of the dab combined with all the energy of a t-pose and then the cannonball backflip to really dunk on those elephants.

Movement felt pretty good. The lack of any aerial movement made it a little tricky to properly land on the elephants, but the stomp hitbox for them felt generous enough that it didn't really matter. Getting the extra boost after bouncing on them is a nice touch. You really have to hold to jump to your max on some of the platforms, but it was doable with a few tries.

The spikes were kinda unfair. The first time I died to them was just a total surprise. And going back to the main menu was a little shocking. I didn't even see the spikes so I didn't know I had died. I thought the game had crashed or something. It would have been nice to see the spikes a little beforehand. Like have some spike pits that were on a timer so you know the game had spikes, then later on switch it up and have the spikes that trigger when you step on them like you do have. At least the spikes were consistent so once I knew that there were spikes inside the boxes, I could avoid them. I went straight at the start, I didn't go left so the first spikes I saw were on the floating platforms. I thought the box on them was just how all floating platforms was. If I had gone left first, I probably would have recognized it.

The animations for Adam were pretty smooth and well-made. I think you could have used the elephant explosion poof for when Adam died too. It would have made dying to spikes more clear. The sounds were really well done. The cheery music really fit the game. The elephant bonk sound made it feel good to stomp on them; I didn't feel bad at all bonking them out of existence!

Great game, love the music. The animations and models fit well and the world generation is a nice touch.  One thing I would suggest adding is to have the elephants attack the player or pose some kind of challenge.

Submitted
No Way Back
LikeReply
monnierantSubmitted1 year ago

Quite nice game. I like strawberries. THe character controll is fun enough.

Have to admit I didn't realize at first how I was dying. (the quick reset to the main screen), but then I noticed the spikes. I have seen some of your progress making the game on the discord server.

I like it, the music is relaxing, the elephants are fun and it just feels wholesome. Goodjob.

Constructive feedback: Put like a second or two or a dying animation before the restart. Make the intro skippable.  And when you finish the lvl you can keep going back to it (by pressing continue).
Question: Did you really work with generating worlds (dungeons)? If so great job!

Fun stuff! Not a huge platformer fan so I didn't finish it but it has a great aesthetic. Love the color world generator feature too! Felt very well put together. The music was fun even if it get repetitive after dying a couple times. It would be nice to see a death animation or something rather than the kick to the menu screen on the spikes thou. Not sure how it fits the theme all that much, but overall great little game!

Thank you for your feedback!
The cutscene at the beginning shows how the planet was just created by the alien god and how adam the alien is it's first inhabitant.
I planned on adding a voiceover to the cutscene to make this more clear but didn't have time.

Really nice moveset, , and lots of polish. The vegetarian cried inside me when I tried to ride the elephant and murdered it, but then I realised that's the goal of the game :'(

Possible improvements?: Camera is a bit awkward when the egg is in front: it suddenly jumps. The elephants have no death animation and suddenly disappear, it may be nice to add something there, and I didn't know what to do the eggs.

Thank you for the kind feedback!
The eggs are just for decoration.

It was worth playing just to get tossed by the elephant. Would love to see more levels!

Submitted
A Long Way Back
LikeReply
MasterBooterDeveloper1 year ago